They have been best friends, diving partners and two of the most in-sync sports duos in Canada for a decade, and on Tuesday, Roseline Filion and Meaghan Benfeito became Olympic bronze medalists in a nail-biter of a victory for Canada.

In another triumph for Canadian women at the pool, the duo from the Montreal area rallied from fifth spot to secure their second bronze in the 10-metre event in as many Summer Olympics.

The event was marked as much by what was going on above the pool as in it. The colour of the water at Rio's outdoor Maria Lenk Aquatic Centre was sickly green and got progressively greener as the competition went on – so much so that the Canadian divers said they made sure to keep their mouths closed.

But they said they did not let the vivid hue, which has gone unexplained, distract them. The pair were in second spot after their first dive, but had fallen behind the Chinese, Malaysian, North Korean and British divers by the end of the fourth round.

It left everything riding on the fifth and last turn. The North Koreans performed their dive poorly and gave the Canadians an opening.

"We need this one," their coach, Arturo Miranda, told them. The two approached the edge of their 10-metre perch, their faces masks of taut concentration. "We got this," Filion told her partner, before they leaped off the platform in dizzying choreography of somersaults and twists.

It was a good dive, but too soon to celebrate. The British pair were still up.

"It was the longest wait. It felt like an eternity," Filion, 29, said later. She took the time to give her 27-year-old diving partner one last message. "I told her I loved her regardless of the result. I knew it was going to be close and we might come in fourth. At that moment, the medal didn't matter because we had come back to what we were at heart … best friends."

British duo Tonia Couch and Lois Toulson took their turn, and Filion and Benfeito knew they had a podium spot. The two locked each other in a smothering embrace and sobbed.

They completed their five dives with a cumulative score of 336.18 points, behind China's Ruolin Chen and Huixia Liu with 354 points and Malaysia's Jun Hoong Cheong and Pandelela Rinong Pamg with 344.34 points.

"It's been 11 years that we're working together, and working so hard," Filion said, crying as she recounted it to reporters. "I couldn't ask for a better partner. We understand each other without having to say a word."

The victory helped take the edge off the stinging disappointment of the fourth-place finish in three-metre synchro on Sunday by Jennifer Abel and Pamela Ware, who lost by less than a point. Filion and Benfeito entered the competition knowing a lot was riding on their performance. In the heat of competition, they clinched it.

"It comes down to the Olympic pressure and having to seal the deal," said Mitch Geller, Diving Canada team leader. "We weren't able to do it in the three-metre, but having seen how our girls were doing through the first few rounds, I expected a really good last dive, and they gave it to us.

"They did it as well as we could hope for. … They were in the rhythm and they did not let go," he said.

What made the difference was their chemistry, and the almost sixth sense that allows them to remain a close tandem. Their dives were a balance of grace and power.

"Their synchronization probably won the day for them because they are so connected," Geller said. "They have been [diving together] since 2005 and they are just in sync."

Their parents were in the stands, as was Filion's older brother, Maxime. Arthur Benfeito, Meaghan's father, spoke of how his daughter had been on the diving board since the age of 7, and has spent years in training, five or six days a week.

"There has been a lot of dedication," he said. "We're proud, and she's doing what she loves. She [and Filion] have done everything they had to."

The past year has been difficult for the pair. Filion had to struggle back from a broken ankle suffered during a practice in December. "We had a really hard season, not knowing if [Filion] was going to be able to come back – there were a lot of doubts – but she's strong and I'm ecstatic," Benfeito said.

The podium finish is the fourth by Canadian women in pool events, after three medals in swimming.

Geller said Canada has offered to bring in expertise to the Maria Lenk pool to try to fix whatever might be causing the water to turn to green. "Everybody was scratching their heads, going, 'What's going on?' I think that the filter is busted, but I'm not sure."

He said it could be an algae problem. "I don't know what it's going to look like tomorrow. I hope it's not a swamp."

Filion said she and Benfeito noticed the water turning greener and greener but did not allow it to break their concentration.

"We came here with [the attitude of] 'Expect the unexpected.' The water could have been orange, yellow, green, we couldn't care less. Nothing would stand in the way of our performance. We just said to one another, 'Close your eyes, close your mouth, and we should be fine,'" she said. 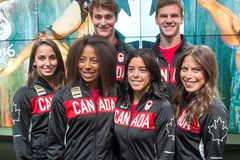 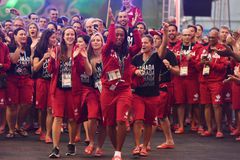 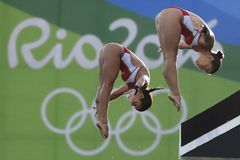