Friends and family have been calling Alex Ovechkin and Evgeni Malkin for months, asking about Olympic tickets and wanting to know who was going to be on the Russian hockey team.

"I field questions about Sochi always," Malkin said. "I feel right now it's pressure for the team, for me. It's everyone."

The Sochi Olympics are a showcase of a generation for Russia and Prime Minister Vladimir Putin, and with that comes the pressure of a lifetime for those taking part in the event the country believes it must win.

"I don't think about it because I don't want to take pressure right now on me," Ovechkin said last month. "But it's kind of hard to do. Every time when I go to the news and on the Internet, I just see about the Olympic Games."

From a hockey standpoint, that means attention on Ovechkin, Malkin, captain Pavel Datysuk and NHL-star-turned-KHL-hero Ilya Kovalchuk, and the expectation of gold on Feb. 23 at Bolshoy Ice Dome. Anything less isn't an option the Russians want to consider.

It's similar to what Canada went through in Vancouver in 2010 with a need to show dominance in a national sport. Given that Russia hasn't won gold since 1992, when it played as the Unified Team, there's even more anxiety.

"I think that always goes with the territory," U.S. general manager David Poile said. "It's probably even more so because starting from the top with Putin. He's wanted these Olympics, the centrepiece is the hockey. The whole Sochi is sort of a man-made area, if you will, just for the Olympics.

"They're putting literally billions of dollars into this, and there's no question that the hockey is the centrepiece of the Olympics. The pressure's clearly on them. We're going to see the best of the Russians, that's for sure."

There will be plenty of Russian motivation throughout the Games, but especially in the men's hockey tournament. Four years ago Russia got skated out of the rink by Canada in the quarter-finals, a defeat that led the national team to hire a new coach, Zinetula Bilyaletdinov, in an attempt to get back on track.

Memories of that 7-3 loss aren't completely gone, but they could be erased in short order.

"It's tough. Yeah, we lost, but if we win ... in Sochi it's unbelievable feeling," Malkin said. "Of course it's tough and we know how hard it (is to) win, but we're ready. We have new coach, we're great team. Just show best game, and we have great chance."

Having a great chance in any hockey tournament starts in goal, and Russia might have a difficult decision between starting reigning Vezina Trophy-winner Sergei Bobrovsky or Semyon Varlamov, who has a longer track record in the NHL. Alexander Eremenko, as Ovechkin pointed out, has won Gagarin Cups in the KHL, but it would likely take a couple of injuries before he gets a look.

That's not a bad thing considering Bobrovsky's play of late for the Columbus Blue Jackets and Varlamov's all season for the Colorado Avalanche.

Beyond international veteran Andrei Markov of the Montreal Canadiens, the Russian defence is young and largely untested. Habs teammate Alexei Emelin and Slava Voynov of the Los Angeles Kings have potential, but there's no telling how they'll respond to the challenge and the expectations of playing on home soil.

Emelin, for one, is embracing it.

"It's good for us because it's good fans. It's home rink. It's a plus for us," Emelin said. "Pressure for the team? Yeah. We have some pressure. But I think after faceoff, you think about the game."

Once the games start, Russia, which is in Group A along with the United States, Slovakia and Slovenia, shouldn't be lacking for offence. There's plenty of firepower in that department thanks to the presence of Ovechkin, Malkin, Datsyuk, Kovalchuk, injury replacement Alexander Semin and even Alexander Radulov, the former Nashville Predators winger who's back in the KHL.

Down the lineup, Russia has a handful of KHL forwards and defencemen but also role players like Nikolai Kulemin of the Toronto Maple Leafs, who could be counted on as a third-line defensive specialist.

The pressure is higher on the stars, but when an entire nation is anticipating at least being in the gold-medal game, that's a tall order.

"We can relate, for sure," said Sidney Crosby, who scored the gold-medal-winning goal for Canada four years ago. "It wasn't that long ago, and we all know how proud of a hockey nation Russia is, too."

Crosby argued that there are positives to hosting, like the obvious boost of playing in front of supportive fans. Beyond that, the Russians have an edge in simply adjusting to life in Sochi for a couple of weeks.

"They're going to be comfortable there," Crosby said. "It's in their home country, they'll be well taken care of, they're familiar with the surroundings."

Being at least co-favourites along with Canada for the first time in decades might not be so comfortable for Russia, which last won a medal (bronze) in Salt Lake City in 2002. Only Datsyuk and Kovalchuk are still around from that team.

But most of these players grew up learning all about Viktor Tikhonov, Vladislav Tretiak and the Soviet Red Army teams that couldn't be beat when the North American teams were sending amateur players to the Olympics. From 1956 through 1988, the Soviet Union won gold in seven of nine Olympics.

The two times the Soviets lost came the U.S. in 1960 and 1980. Mike Eruzione, who was the captain of that 1980 team, remembers when the Soviets were the "enemies" and how they were expected to win gold until the "Miracle On Ice" happened.

It's different for Sochi in part because of Russia's medal drought.

"They've underachieved quite a bit in the Olympic Games, and now to have it in your own backyard with what looks like a wagon-full of talent, it'll be really interesting to see how they handle it," Eruzione said. "I compare it a little to Canada. If Canada didn't win the gold in Vancouver, wow, there would've been a lot of upset Canadians. And the pressure that was off their shoulders when Crosby scored, that was pretty big. And I think it's going to be the same for the Soviets in Sochi to win."

Canada proved four years ago that pressure isn't prohibitive to winning, that being at home can be an incentive.

With the whole world watching them in their country, the Russians hope they, too, can capitalize on the home-ice advantage. And Ovechkin believes that mentality is his team's biggest strength.

"(The) most important thing is (it's) us against the whole world," said Ovechkin, who dreamed as a child of representing Russia in a home Olympics. "I don't think somebody is going to be there ... to be just in the Olympic Games. Our mission is try to win the gold medal and play our best hockey."

Crosby, Malkin will be bitter rivals who figure prominently in their team’s hockey fortunes
January 31, 2014 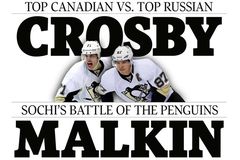