Following in the footsteps of the likes of Jesse Owens and Carl Lewis cannot be easy, but Usain Bolt has carried the heady mantle of the world's fastest man with a fun-loving dignity.

In the 20 years since Ben Johnson was stripped of his Olympic gold and world record in the 1988 Seoul Games, there have been six sprinters -- three Americans, two Jamaicans and one Canadian -- who've held the coveted title.

Two others, Americans Tim Montgomery and Justin Gatlin, were stripped of their respective world records after failing doping tests, although the latter will be competing in London having served a four-year ban.

Lewis (9.92sec in 1992), who mirrored Owens' achievements of four golds in the 1936 Games, with a quadruple triumph on home soil in Los Angeles in 1984, is still visible come Olympic time but generally avoids athletics.

"If anyone ties any of my records, that's wonderful, great. Records are borrowed, and medals are earned," Lewis told AFP in London.

Leroy Burrell, who clocked 9.85sec in 1994, coaches at the University of Houston, while Canada's Donovan Bailey (9.84sec in 1996) occasionally works as a media commentator.

Outspoken American Maurice Greene (9.79sec in 1999) can be seen holding court at sponsors' tents, making predictions on the 100m, the final of which is scheduled for Sunday.

"Usain will go out there and continue to do the things he does... But (Jamaican teammate Yohan) Blake is going to win," said Greene.

Since June 2005, two Jamaicans have been the fastest men on earth: Asafa Powell and Bolt.

Powell, who will be racing in London but has never claimed a major individual world or Olympic title, held the record for three years before Bolt claimed it with a startling 9.69sec in the Beijing Olympics, before bettering it to a jaw-dropping 9.58sec in the 2009 Berlin world championships.

Bob 'The Bullett' Hayes, who went on to win the 1972 Super Bowl with the Dallas Cowboys, set the record of 10.06sec in 1964 in Tokyo, on a cinder track, had a word of warning for all his record-breaking successors.

"Once you become that, you can only go down," Hayes said of being the world's fastest, in a Sports Illustrated interview given shortly before his death in 2002.

Hayes' record fell to Bob Hines, the American who became the first sprinter to clock a sub-10sec run in helpful conditions at altitude in the 1968 Games in Mexico City, timing 9.95sec.

It was a record that lasted until Calvin Smith broke it by two-hundredths of a second in 1983, followed by Lewis four years later.

Bolt has largely embraced being the world's fastest man, a lucrative title with major corporate sponsors keen to cash-in on the Jamaican's global fame.

He admitted, however, the huge leap from an unknown to one of the most recognised faces on the planet had come at a price.

"I used to be able to walk through an airport or down the street without being recognised, now it's impossible," he said on the eve of the 100m here.

"I guess I can put up with that for three months a year in Europe. In Jamaica you are just treated like a normal person."

But Bolt insisted success had not changed his essential character.

A Jamaican seems destined for sprinting gold, but which one?
July 27, 2012 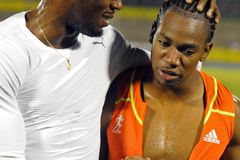 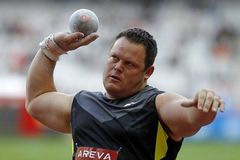