As they prepare to defend their Olympic gold medal, Tessa Virtue and Scott Moir say they are a different team heading to Sochi, Russia, than the one Canadians got to know in Vancouver.

Canada's ice dance champions enter the 2014 Winter Games much healthier – with Virtue no longer dogged by the pain in her legs that hindered her four years ago – and they have logged far more training hours this summer than in previous seasons.

Most importantly, they are older and wiser than they were in 2010. Though Moir admits "the kids" they were in Vancouver would not have accepted that.

"You wouldn't have wanted to tell those kids to their face that they were just kids, because we would have been so angry to hear that," Moir said on a conference call Wednesday, in advance of next week's Skate Canada International, their first stop on the Grand Prix tour.

The intervening time since Vancouver has changed their perspective. Moir, 26, and Virtue, 24, have now witnessed an Olympics from the inside, including the pressure that comes along with being the defending champs. In Vancouver, they had the luxury of not knowing what they were heading into.

"People think that experience is such a wonderful thing. And sometimes it isn't," Virtue said. "Sometimes, it simply adds more stress. Because you do know the scope of things. You know the magnitude of what winning an Olympics means. And we don't have that naiveté working in our favour heading into Sochi."

The challenge will be to use that experience to their advantage.

For Moir and Virtue, the pursuit of a gold medal begins next weekend at the Skate Canada International in St. John. It is the first time they will perform their Olympic short and long programs for a home audience.

On paper, the season has gotten off on the right foot. At the recent Finlandia Trophy, a warmup event held this month in Finland, Moir and Virtue won handily. But tiny mistakes within their performance have the two looking to improve.

Moir says he took too long on one of the lifts, and didn't hold a spin long enough – errors he chalked up as "October mistakes."

The skaters spent time analyzing video tape to see where they went wrong and the glitches are easily correctable.

"One of the best parts about [Finland] was learning to compete these programs. So I think we were slightly disappointed because it didn't quite match up when we went to compete," Virtue said. "Perhaps some of that was the expectation of knowing that we're trained and knowing where we want the programs to be, and maybe trying to overperform them a little bit, instead of just kind of trusting the place where we are right now here in October."

While they had minimal time to train in advance of the Vancouver Games, due to the pain Virtue felt from a condition that affected blood flow in her legs, they are approaching these Olympics with a different mindset, following surgery in late 2010 that helped alleviate the problem.

Mentors have told Moir and Virtue that Olympics are won in the spring and summer before the Games. So rather than head off to Asia to perform shows this summer, as they normally would have, the two stayed home and went to work.

"This year, we really simplified things and just set our plan and showed up to the rink every day to execute that plan," Virtue said. "Just having that schedule was really beneficial to us."

The pair train in Canton, Mich, alongside U.S. rivals Meryl Davis and Charlie White, their biggest challengers for the podium in Sochi. Despite sharing the ice, Moir said the Canadians don't spend a lot of time thinking about their American counterparts.

After St. John, Moir and Virtue will compete at one other Grand Prix event in France in November, and won't face Davis and White until the Grand Prix final in early December, assuming the two heavy favourites make it there.

Until then, Moir says he and Virtue will not be focusing on their rivals' progress, only their own.

"You can't let those demons get you. You can't be looking over your shoulder. You've just got to keep going and pushing forward," Moir said. 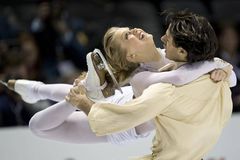