The look on Jennifer Abel's face, her ringed eyes still glistening with tears, said all that was needed to be said.

For the rest, Abel could only express what was obvious: how heartbreakingly close a medal had been.

"Unfortunately," she said after the honours were given away to others, "we missed the podium by less than one point."

Abel and partner Pamela Ware entered the three-metre springboard synchro competition in Rio on Sunday as two of Canada's strongest medal contenders. They are half of Canada's "Fab Four," a quartet of Quebeckers that form the country's female powerhouse on the springboard and platform.

But on a day when menacing rain clouds replaced Rio sunshine, and drizzle occasionally fell on the open-air Maria Lenk Aquatic Centre pool, the hopes for glory for two of Canada's most talented athletes sank.

They would go home empty-handed in an event for which Canada took home bronze in London in 2012.

From the start, Abel and Ware seemed to struggle to seamlessly execute the dives they had done thousands of times before.

The duo from suburban Montreal finished their first dive in seventh place out of eight.

Then, they battled back, working to reach third spot – agonizingly close to a podium trip – by the fifth and final round.

Their supporters in the stands, including their families who had travelled from the Montreal area, were cheering them on and waving Canadian flags.

And then, with one last plunge, a forward two-and-a-half somersault with one twist that went by in a blur, their chances receded.

Abel, who was competing in her third Olympics, said the problem was her execution of the last dive, which meant she wasn't vertical entering the pool.

After it was done, she emerged from the water and, a stricken look on her face, watched the scoreboard. She covered her mouth with her hands, as if a scary apparition was about to appear before her.

"I kind of knew it was probably over," she said later, "but at the same time, you always wish that you can get that half a point that would make the difference."

The results flashed on the screen. She dunked her head below the water.

The Canadians finished with a cumulative score of 298.32. The Australian tandem of Maddison Keeney and Anabelle Smith beat them by .87 of a point.

The Australians won the bronze.

"Unfortunately, I missed my last dive so that's what cost us our bronze medal today," the 24-year-old Abel said, seemingly eager to take the blame.

"We knew that we were able, that we belonged on that podium but today just wasn't our day."

Abel won the bronze in the same event in London in 2012 with now-retired partner Émilie Heymans.

Ware became Abel's partner and the duo picked up silver medals at the 2014 Commonwealth Games and 2015 Pan American Games.

Ware, 23, who is at her first Olympics, took some responsibility for the pair's finish, as well, saying she missed her fourth dive, in which she "was a little past the vertical."

She said Abel apologized to her for her performance, but shouldn't have.

"We are a team," Ware said, "and we are working together."

The day in Rio turned into a historic one for the dominant Chinese and diver Wu Minxia, who became the first to take home five Olympic gold medals in diving, overtaking competitors such as American Greg Louganis.

In a near-flawless display of the precision and strength for which China's divers have become known, she won gold in the three-metre synchro with partner Shi Tingmao.

The pair finished with a score of 345.60, far ahead of the competition.

The Italian pair, Tania Cagnotto and Francesca Dallape, took silver, far behind the Chinese, with 313.83 points.

With Abel and Ware's loss, Canadian women's next chance to capture a diving medal in synchro comes with 10-metre platform duo Roseline Filion and Meaghan Benfeito in their competition on Wednesday.

All four women compete in individual competitions, as well. 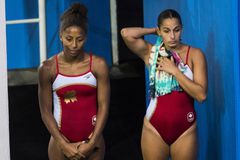