A year ago, Canadian forward Wojtek Wolski was in a hospital bed recovering from surgery on a broken neck. Today, he is an Olympian.

"I look at the picture of me in the hospital and can't help but cry," the 31-year-old winger said via social media. "Mostly tears of happiness, but I am filled with so many emotions about what I have overcome. I could never have imagined that I would be so lucky one year later."

Wolski suffered two broken cervical vertebrae, spinal cord trauma and a concussion when he crashed headfirst into the boards in October 2016 in a KHL game in Russia.

"That's what our team's about. It's about guys that have received a 'No' but found a way to make a 'Yes,"' said head coach Willie Desjardins. "Their determination and their heart is incredible."

In the absence of stars from the NHL, Team Canada will ice a hockey team long on heart at the Pyeongchang Olympics. Hockey Canada drew talent from seven different leagues across North America and Europe before settling on a 25-man roster that has more than 5,500 NHL games under its belt.

While other teams will undoubtedly have their own stories to tell, Canada's character will show when things get tough at the tournament, Desjardins and Burke added.

The bulk of the NHL experience comes from seven forwards with some familiar names.

Chris Kelly, who won the 2011 Stanley Cup with the Boston Bruins, leads the way with 833 regular-season games in the NHL. Most recently, the 37-year-old, who has 123 NHL goals and 166 assists, signed a tryout contract with Belleville of the AHL.

Wolski played in 451 games, accumulating 99 goals and 168 assists for Colorado, Phoenix, the New York Rangers, Florida and Washington. Gilbert Brule saw action in 299 games with Edmonton and two other clubs.

The blue line is less experienced with Cody Goloubef leading the way with 129 NHL games.

Defencemen Chris Lee and Mat Robinson have not played in the NHL while Chay Genoway has one game and Maxime Noreau six.

Goalies Justin Peters, Ben Scrivens and Kevin Poulin have 277 NHL games between them, spread between eight teams. Peters plays in Germany, Scrivens in the KHL and Poulin for a Croatian team that plays in the Austrian league.

Thirteen players come from the KHL, four from the Swiss league, three each from Sweden and the American Hockey League, and one from Germany and Austria.

Canada will be solid in goal, mobile on defence, skilled and experienced up front — and above all hard to play against, according to the team braintrust.

The roster announcement, carried live on several networks, was made at the Hall of Champions at Hockey Canada's office in Calgary. It came one day after the NHL released its all-star squad.

Canada opens play in a group with the Czech Republic, Switzerland and host South Korea.

The top four teams — the group winners and the second-ranked team with the best record —will advance to the quarter-finals while the other teams take part in qualification playoffs to see who joins them.

Canada's training camp starts Jan. 28 in Latvia, with exhibition games in Riga on Feb. 4 against Latvia and Feb. 6 against Belarus. The team will then fly to Pyeongchang and take part in the opening ceremonies before facing Sweden in a warmup game in Incheon on Feb. 12. The team will return to the Olympic Village for the opening game Feb. 15 against the Swiss.

No captain has been named yet.

"We've seen our players numerous times. We've seen all our players," said Burke. "I don't think we can sit here today and say we missed anybody. Everybody was given an opportunity."

Most recently the Canadian team has played at the Sochi Cup, Tournament of Nikolai Puchkov in St. Petersburg, Karjala Cup, Channel One Cup in Russia, and Spengler Cup in Switzerland.

Forward Christian Thomas, a second-round pick of the New York Rangers in 2010 who is playing for Wilkes-Barre/Scranton in the AHL, got the news he had made the team from his father, former NHLer Steve Thomas.

Salmond said while team officials looked at NCAA and junior players, "it's a man's game."

"That's not to say that some of these kids aren't at the development stage where they can play with me," he said. "But what it does say is it takes some time to make that adjustment ... We don't have that time."

NHLers may be missing but the passion is still there.

The Canadians engaged in a second-period brawl with a young Russian national team in a 3-2 loss at the Sochi tournament.

Canada's 2014 Olympic team was star-studded with the likes of Sidney Crosby, Carey Price, John Tavares and Jonathan Toews. The 25-man roster's one-year salary cap hit was more than US$150 million, according to the Hockey News.

Canada has won 13 men's hockey medals, including nine gold, since the first Olympic hockey tournament in Antwerp in 1920. The Canadian men have won three of the last four hockey golds, including the last two in Sochi and Vancouver. 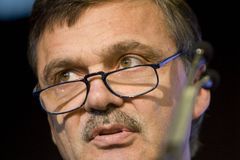 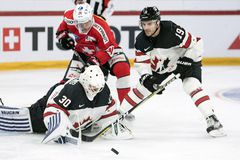 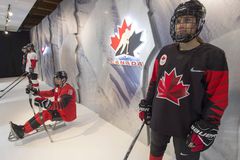