A few days ago, the alleged mastermind behind Russia's state-sponsored doping program repeated the message his government has been hawking for two years.

"I'm happy to go to any court, to any disciplinary committee, to anyone and I'll be happy to talk about how there has never been and will never be any state programs related to doping in this country," Vitaly Mutko, Russia's Deputy Prime Minister, told The New York Times. "We do not need that."

After interminably delaying its reaction, the International Olympic Committee decided on Tuesday what everyone already knew – that Mr. Mutko is lying.

The resulting punishment is an unprecedented exercise in benign Stalinism. Russia will be airbrushed from the picture at the Winter Olympics in South Korea.

The Russian Olympic Committee is banned from Pyeongchang; no Russian officials may attend; no Russian uniforms may be displayed and no Russian anthem will be heard.

There is, of course, a catch. Russian athletes may still compete as neutrals if they have been vetted as sufficiently clean. Those competitors will be listed as an "Olympic Athlete of Russia."

Also, the sanctions could still be challenged at the Court of Arbitration for Sport.

With only nine weeks until the opening ceremonies in South Korea, it's not clear what that process looks like. Theoretically, despite the ban, Russians may still stand on podiums.

The Western reaction to the decision was positive, but not triumphal.

Canadian law professor Richard McLaren, author of the key report on the issue: "I congratulate the IOC for its decision …"

Everyone took pains not to cheer Russia's fall because what comes next will test the relevance of the Olympic movement. Does Russia take its rebuke in stride, or does it turn this lengthy skirmish into a full-on war?

With that in mind, IOC president Thomas Bach was already urging everyone to move past this.

It was time to "draw a line under this damaging episode," Mr. Bach said. He brushed aside the suggestion that Russia should publicly admit its guilt.

When the word "boycott" was raised, Mr. Bach's hangdog countenance slackened even more.

"Firstly, an Olympic boycott has never achieved anything," Mr. Bach said. "Secondly, I don't see any reason there for a boycott by the Russian athletes, because we allow the clean Russian athletes to participate."

So, in essence, this ban is not actually a ban. It's more of a timeout. The plutocrats who rule Russia stand in the corner, their athletes compete in make-believe uniforms and then everyone rejoins the class.

It was clear from the outset that the IOC did not want it to get even that far. It commissioned report after report into various Russian doping schemes, hoping things would get better or, at least, murkier.

Mr. McLaren said as much a year ago: "I think, probably, a lot of people wish [his probe and a previous one] had never happened."

But the level of Russian corruption uncovered continued to make the IOC and its doping regime look ridiculous.

This is a punishment for that crime, rather than the lesser sin of cheating, which is something athletes from just about every country on Earth have been caught doing.

The next, more fraught, step is Russia's reaction.

When the topic of a ban was first broached before Rio 2016, Russian President Vladimir Putin spoke darkly of a "schism" in the Olympic movement. The inference was clear – kick us out now and we might never return.

At that point, the IOC still had carrots to distribute. Russia was allowed to compete in Brazil, albeit with various face-saving restrictions. That didn't make anyone happy.

But having now wielded the stick the West urged it to swing two years ago, there isn't any option left that might control Mr. Putin's behaviour.

Since it would not be in his nature to be seen crawling for crumbs, boycotting Pyeongchang would seem an obvious next move.

Russia's absence will go some way to undermining the entire operation.

The Winter Olympics is already a niche concern – only 80-odd countries participate (compared with more than 200 at a Summer Games), only a third of those win medals and only a handful of northern European and North American countries dominate.

Russia took nearly a fifth of the medals in Sochi. Without its participation, a boutique event becomes an exclusive house party for the developed world. It's the richest people on Earth high-fiving themselves for a fortnight while everyone else presses up against the window.

Without down-at-the-heels Russia, this whole thing begins to seem like the dirtiest word you can throw at anything these days: privileged.

This is the Gordian knot the IOC has tied around itself – either be seen to placate a cheater and a bully; or encourage him to run amok and smash up your house.

On Tuesday, it chose the second option.

Now we'll see if the Olympic ideals of non-politicization and global amity the IOC is always talking up prove more resilient than the notion of Olympic fair play.

IOC bans Russia from 2018 Winter Olympics
December 5, 2017
Next year’s World Cup in Russia is a disaster waiting to happen
December 1, 2017 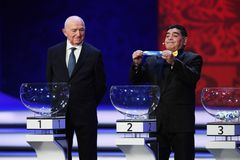 Chemist’s detailed diaries bolster doping case against Russia
November 28, 2017
Follow us on Twitter @globeandmail Opens in a new window
Report an error Editorial code of conduct
Due to technical reasons, we have temporarily removed commenting from our articles. We hope to have this fixed soon. Thank you for your patience. If you are looking to give feedback on our new site, please send it along to feedback@globeandmail.com. If you want to write a letter to the editor, please forward to letters@globeandmail.com.
Comments