They were in a tent at the Jamaican high-school track and field championships, these two doctors from the Beaches neighbourhood of Toronto, working on competitors taking part in the four-day event that is in many ways ground zero for the island's world dominance in sprinting.

This was the first year the partners in Omega Health and Fitness had plied their trade at the event known as Champs, but they've been involved with Jamaican athletes, including Olympic sprint star Usain Bolt, for seven years, in Dang-Tan's case. With apologies for, in her words, "getting excited about weird stuff," Ashcroft expressed continued amazement at the feet of the Jamaican athletes.

"We're treating all these Jamaicans and time and time again I'm looking at Tan and going: 'Oh my god, they're feet are rigid: High arches, the perfect, coiled spring to transfer energy without losing it all in a loose bag of bones.' Everybody's trying to figure out what is so special about the Jamaicans. This is one of the things we found.

"People in North America tend to have sloppy feet," Ashcroft said. "It's the typical thing we see everyday in our practice in the Beaches, with all the marathoners and runners we treat. We overpronate; we're in shoes with a ton of control. We don't have a lot of muscular control because we've been locked into shoes since we were toddlers."

Ashcroft and Dang-Tan will again be in Jamaica this weekend for the Olympic trials at National Stadium in Kingston, where the exact composition of the team that is expected to own the track at the 2012 London Games will be determined.

Cue the accusations and suggestions that the Jamaicans are cheating. Because how else could they possibly dominate more-developed countries?

Dang-Tan became involved in the Jamaican program at the behest of one of his mentors, Russ Ebbets, a biomechanics instructor for USA Track and Field.

Dang-Tan accompanied Ebbets to the Caribbean regional games (CARIFTA Games) as part of the event's general medical team, where he met one of the medical officials of the Jamaican team. Dang-Tan, then a resident of Washington, was asked to attend the Penn Relays as part of a medical support team for the sizable Jamaican contingent at the annual U.S. event.

Ashcroft has worked at U.S. trials, and knows she has seen signs of steroid use. "I mean, it was obvious," she said.

She and Dang-Tan are convinced the Jamaicans are above board – that it is the cultural significance of running that is at the root of the sport's success there, not steroids or other performance enhancers that are somehow undetectable to World Anti-Doping Agency officials.

"We've been on the island enough times to know it's just not available," Dang-Tan said. "In the past, you'd have high-school runners from Jamaica get scholarships to the U.S., and that's a different kind of access. But now runners like Bolt and [Yohan] Blake are staying home and training. That seems to keep things above board.

When they travel overseas, Jamaican athletes can count on the country's expatriate community to help foot the bill for medical attention. But for Ashcroft and Dang-Tan (who also work with Canadian track athlete Crystal Emmanuel), their time on the island – which has brought them untold returns in terms of knowledge and practical applications of theory – takes them away from their growing practice in Toronto.

There is a chance they might be in London as part of the Jamaican team, but, in the meantime, they have developed a program for Jamaican sprinters such as Rolando Reid and put it in use via Skype.

"We'd like to spend more time doing 'pre-hab' as well as rehabilitation on the island," Ashcroft said. "We don't see ourselves as just being there to manage injury.

"One of the main reasons we are there is to improve performance, to learn and be able to take it to general public as a means of improving their quality of life." 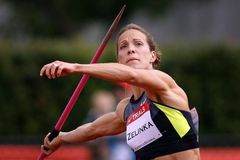