Now that Brazil has managed to stagger up to the starting line, it's time for the International Olympic Committee to congratulate itself on a job well done.

It didn't do any of the heavy lifting, of course. It certainly didn't pay for the bulk of it. But that's small beer compared with the colossal effort it takes to think Olympically.

"You know the crisis in which [Brazil] is in," IOC president Thomas Bach said Thursday, following the conclusion of the latest meeting of his Politburo. "There were huge, huge challenges, if not a deep crisis. Nevertheless, you see that this country, this city, this organizing committee, was able to transform a city and put Olympic Games upon this stage. The IOC was always in solidarity at all these times."

I'm sure the IOC's, you know, good vibes will be a huge comfort here after the circus tent comes down and the bills come due.

Related: RIP Juma: How a dead jaguar could be the latest symbol of Brazil's Olympic woes

What strikes you when you listen to Bach drone in his reassuring Bavarian lilt is that he actually believes this nonsense. It's always put in bland MBA terms, but there is a jagged edge of ecstatic fundamentalism at its core.

Increasingly, the IOC functions less like a business conglomerate and more like a romantic cult. The systemic belief in sport as a vehicle of cultural advancement is total. A few Swiss-based aristocrats get to define what qualifies as progress and how much sacrifice is necessary to obtain it.

Rio is in the midst of a total collapse brought on by recession. An emergency mobilization of fading resources has made this event possible, but the return to free fall is inevitable. The endeavour may be high-minded, but it is buttressed on something sordid – poverty and human misery. That's the regularly scheduled programming Rio will return to once the entertainments have concluded.

The blitheness with which the IOC approaches this reality reminds one of something once said by Laurent Tailhade, a poet, anarchist and supporter of political violence: "What do the victims matter if the gesture is beautiful?"

In that sense, the IOC is moving away from the base pleasures of profit and into the more alluring aesthetic realm of social engineering.

The abetting of Rio's decline is one example. The IOC's recent decision to bring five new sports under the Olympic umbrella at Tokyo 2020 is another.

The typical reaction to their choices varies from a shrug (baseball and softball, karate) to a cocked eyebrow (climbing) to a lean-forward-and-bug-out-your eyes (skateboarding and surfing). They are, to varying degrees, dumb ideas.

Baseball/softball has already failed at the Olympics. Since tae kwon do and judo are currently on the list, how many martial arts can be fitted into this thing? Are they eventually going to start bashing each other with nunchucks?

Skateboarding and surfing are not even sports. They're bigger than that. They're lifestyles. You might as well include competitive vegetarianism.

And while it's easy to make fun – which someone should, at great length – it's Bach's rationale on the topic that is just a tiny bit sinister. He cited two reasons for the IOC's choices – youth and urbanization.

"The world has changed," Bach said. "The youth of today has so many options for their leisure time that you cannot just wait for these young people to come to sport. You have to go where they are. With this organization, we go where the young people are."

However well meaning, that sounds a lot like indoctrination.

If you translate what Bach is saying from bureaucratese to human language, the IOC's current mission statement is that everyone will be subsumed under the Olympic banner. Nothing sporting can exist outside it. The IOC will codify its rules and tell you why it matters. In (its) perfect world, the Olympics will represent the highest level of achievement. In everything.

(I feel fortunate that Bach missed the chance to put Sauron's Eye on the primary leisure pursuit of my youth – Being in Parks After Dark Drinking Root Beer Schnapps Out of a Bottle.)

There are some things that should not exist in the Olympic nexus – not because they don't deserve to, but because not every sport needs to be Olympic.

There is nothing flawed about an athletic pursuit that does not point up toward a podium. Why does everything have to be reduced to winners and losers?

Because that's what the IOC does. It has styled itself the manifest destiny of sport – it's coming to you and taking over, for your own good and whether you'd like that or not. It will not only make you better, but pure and wholesome. The language is unmistakable.

On another subject – the question of why the IOC chose not to ban Russia en masse here – Bach referred repeatedly to "natural law" as his base principle. I'm in the minority who agree with the IOC's decision, but by the end I was flinching every time he said it.

Don't tell me what's "natural," pal. I'll decide that for myself.

Once you start thinking this way, the symbolism of this event – the marching into stadiums, the raising of flags, the taking of oaths – begins to seem insidious. Sure, that's paranoid, but it doesn't mean it's wrong.

Though long past time, one is finally getting the creeping sense that the Olympic movement has begun to fully embrace the less savoury implications of its mandate.

The man who proposed the motto "Higher, Faster, Stronger," Pierre de Coubertin, once explained that the Games represented "a programme of moral beauty."

There's a shorter distance than you'd think between that belief system and Tailhade's. If what you aspire to is essentially, unquestionably right, you can justify just about any wrong thing to get there.

Rio provides the rebuttal. There are limits to what is acceptable in pursuit of athletic excellence and total inclusiveness. We have begun to exceed them.

While the Olympics remain an irreplaceable expression of unity, not at any cost and not if the best justification for them is 'Because we can.'

Kelly: All eyes on the Canadian Olympic Committee
August 3, 2016 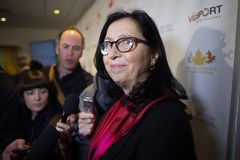 Kelly: The Olympics will show that Rio is a place that thrives despite itself
August 2, 2016 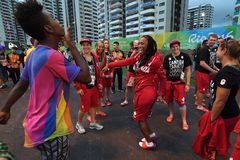 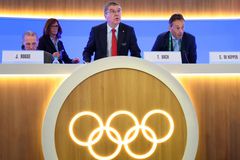