Four years ago at London 2012, Michael Phelps had begun to drift off the rails. If you looked hard enough, you could see it.

The focus that animated his myth-making effort in Beijing had bled off. The greatest swimmer of all time had become visibly bored.

After winning his 19th Olympic medal, he tried to sum up how incredibly awesome it is to be Michael Phelps.

"I started scrolling through thousands of [Twitter] mentions and I was like, man, this is a lot of things to look at," Phelps said at the time. "I want to thank all my friends who sent some tweets to me. Like, you know, Obama."

He was standing there with this smug grin, talking about the President of the United States like this was a guy he'd worked with at a 7-11 during high school.

The impression you came away with was of a person who'd lost his bearings. Phelps no longer seemed able to tell when or about what he was supposed to care. He still won four golds.

He retired after the Games. That didn't go so well. Without a sporting purpose, Phelps turned into the sort of jamoke most people fear their middle-class sons might become – a dope-smoking nitwit tethered to a PS4 who only leaves the basement after dark.

A couple of run-ins with the law and an excruciating tabloid obsession with his sex life turned Phelps from a Wheaties cover boy into a milk-carton mugshot. His reputation had gone missing.

Once the most successful Olympian of all time became a punchline, no one quite knew what to do with that. Lash him? Feel sorry for him? Use him as an instructive warning about the dangers of sloth?

They tried all those things, but without much conviction.

It is a general rule that Olympic heroes do not fall. That's part of the attraction. They are frozen in their podium moment: young, happy and physically perfect. The less they say, the better. Too much talking runs the risk of transforming them – prince-to-toad style – into regular people.

On the rare occasions when they've risen far enough to fall, it is a precipitous sort. No Olympian has ever felt that descent quite like Phelps.

Part of the problem was his persistent excellence. Everyone had gotten used to him. They'd tired of the training stories. They wanted to know more about the man. What they found out didn't impress them.

Phelps eventually wanted to return, not just to sport, but also to the hero role. This was his first acknowledgement that he doesn't really swim for a living. Rather, he's in the "Being Michael Phelps" business.

The first step was in publicly plumbing the depths. He gave a lengthy, self-flagellating interview to Sports Illustrated. He went deep.

"Honestly, I thought, the way he was going, he was going to kill himself," his coach, Bob Bowman, said.

"I was in a really dark place," Phelps said. "Not wanting to be alive any more."

That piece was released in November, 2015. His competitive renaissance was already under way. In cynical terms, it was a piece of public relations genius.

Here was a whole new sort of Olympic champion – a fallen one with a chance of redeeming himself, but to do it at an Olympics.

This narrative is played out constantly in pro sports, but because so few athletes can extend their dominance over two or more Games, we do not see it at the amateur level.

And certainly not in this way – from wunderkind to burgeoning star to irresistible force to bumptious lion in winter to whatever Phelps hoped to be here in Rio. The arc runs over five iterations of this event, which is key.

One of the sweetest experiences of any Games is the chance to reacquaint ourselves with familiar, missed figures. These three weeks function as a national family reunion.

As soon as you catch sight of Brian Williams or Clara Hughes or Ron MacLean or Donovan Bailey, you are transported back to previous Games. Not just the sport. But what you were doing then, and how you felt.

The real charm of the Olympics is that they are a time machine, accessing previous eras in our own lives. They are irregular enough that memories are sparse and therefore vivid. This feeling is amplified as we grow older.

Our experience as Canadians is repeated throughout all the countries of the world, among people we know nothing about and wouldn't know to see.

But everyone recognizes Phelps.

He's the best there ever was and has been so for what feels like forever. Watching him stack achievements one atop another, you could not help but form that same connection with him. You don't need to be American to understand that.

That is perhaps why Phelps' off-the-field-of-play failures – most of them misdemeanours we'd shrug off from a pro – affected people so deeply. They had wanted to believe in him. He'd robbed them of that innocent pleasure.

In Rio, Phelps has become a figurehead for the entire Olympic movement. When you want to know what a proper athlete looks like, there he is. Physically purpose-designed to do what he does. At 31, still performing at the highest level.

But all the goofiness – once charming; then irritating; and eventually nefarious – is gone. The purpose has returned. Everything he says and does is underpinned by a pining sense of gratitude. The Olympics made him, destroyed him and remade him again.

This is the place he belongs. For most of us, it's the only place he exists.

He'll retire again once this ends, having extended his record as the most successful Olympian ever by as many as six medals.

"I feel like I will be able to turn the page and say, 'Whatever was left here, I can live with,' " Phelps said before it started.

His last contribution to the viewing public is that same thing – a few more memories, the sort that we can live with. 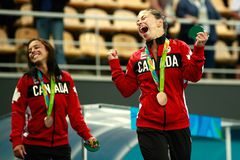 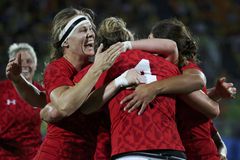