Shortly after she'd won a bronze medal, Jen Kish was asked to compare a rugby body to a gymnastics body.

"The stigma around … [a small pause for consideration] … I'm not the most feminine-looking person in this room," the Canadian women's rugby captain said. "At the end of the day, if you can look at yourself in the mirror and be proud who you are and what you've achieved, then I think you're winning."

The question wasn't leading in that direction, but the subtext picked up by Kish is that there are right bodies and wrong bodies.

It is an abiding Olympic topic, usually directed at women and spoken around in terms ranging from salacious to reflexively outraged.

But at a Games, it would be more correct to say there are just bodies, and all of them in a state nearing physical perfection. There is gym fit, and there is Olympic fit. Up close, the difference is shocking.

You can't help but ogle, but without much eroticism. The context is all wrong and the competitors, men and women, are so unlike the people you see in everyday life that you have almost no frame of reference.

OPINION: For women at the Games, sexist media is the biggest hurdle

The abiding thought when you're looking at an Olympic athlete in some state of undress is "Instead of going out tonight, I'm going to stay in my room and do push-ups."

As it turns out, what you meant when you said "do push-ups" was "drink beer." So every day, you feel a little worse about yourself.

In order to deepen this emotional trough, the BBC has created a wonderful, life-disaffirming tool titled Who is your Olympic body match? You throw in your height and weight and hope dismally for the best possible outcome. Maybe a really well-put-together archer. In that, you will be disappointed.

In my own case, the algorithm matched me with a Qatari hammer thrower named Ashraf Amgad Elseify.

This thing really works because it is amazing how much we are alike (aside from some small differences on the north-south axis of weight distribution).

For instance, Elseify looks like a washer/dryer combo that has grown legs. And I look like a beanbag chair wedged into a pair of pants.

Other than that, we could be twins.

Elseify doesn't look much like, say, a volleyball player. I imagine he has trouble buying suits off the rack. But like most people here, his body is a purpose-built tool designed to do one very specific thing: in his case, chuck hammers.

That is the ultimate expression of the right Olympic body – that it do the thing it needs to do better than just about anyone alive. In every single case, the athletes have managed it. Otherwise, they wouldn't be here.

The only meaningful variation is in what that purpose is. In that sense, the Olympics are where our traditional ideas about what looks right or wrong are turned inside-out and made ridiculous. From venue to venue, we are presented with all sorts of shapes, all of which are athletic. Some of us have trouble reconciling that.

Four years ago in London, an Australian tabloid ran a low, mean-spirited photo spread of swimmer Leisel Jones. Though the word "fat" was not used, that was the inference.

The next day, Jones came out to face the press after practice, visibly trembling. She stood there in her swimsuit in front of a group of fully clothed men clutching her folded-up tracksuit against her midriff.

For all present, it was an exercise in mutual humiliation – Jones being very aware of being looked at; everyone else trying not to look at her; and all wishing they could be somewhere else.

Her dignity in addressing the issue – "I swim in the pool. I don't swim in the papers" – had the proper effect of shaming everyone involved.

You'd like to say it ended well. Jones did win a silver. But years later, she'd say that the incident had driven her into a lengthy depression.

She still felt the need to explain something – "Genetically, I was always a little bit heavier" – that requires no explanation. Jones won nine Olympic medals. Her DNA could be the raw material used to colonize other planets.

The irony, of course, was that were you to meet Jones at the time in any environment other than the Olympic pool, you would have thought her the fittest human you had ever encountered. She was built like all elite swimmers – huge shoulders, tiny waist, tapered like something meant for flight.

Not a model's body, but one far more aspirational. One that had to be constructed over years of training.

Nevertheless, she could still be laid low by a cruel word, just like the rest of us.

From our perspective – the normals looking up at the superhumans – that's what strikes you most. That they worry about this stuff. There is no place for it, but it is perversely reassuring that even the best of us feel the unavoidable temptation to compare ourselves to the person we're standing beside. At this level, that person may be just a fraction 'better' – whatever that word means.

In the end, they may have it worse. None of the rest of us has any hope of looking like them. But they've gone far enough down the route of body modification that they can imagine that just a little more effort might fractionally improve their already perfect forms.

It is considered bad manners to talk about this sort of thing, but everyone thinks it. We've been sizing each other up, often maliciously, since the dawn of time and will continue to do so until the sun explodes.

What the Olympics offers is a once-every-two-years corrective to the guise of this discussion – that all of us should look one specific way.

What the Games teach us is that no body can be wrong if it does something well, as well as the profound lesson that everyone is vulnerable on this topic, regardless of how they look.

It is another small part of how the Olympics bind us all. All one can hope is that the endless fascination around this subject can be increasingly pointed toward kindness.

Opinion
For women at the Games, sexist media is the biggest hurdle
May 16, 2018

Opinion
An Olympic challenge: testosterone
May 16, 2018 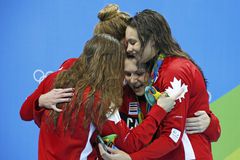