Perennial gold-medal favourites in Olympic team curling, the best Canada can now hope for at the Pyeongchang Winter Games is a solitary bronze.

John Shuster of the United States beat Calgary's Kevin Koe 5-3 in the men's semi-final Thursday, busting open a chess match between the North American rinks with a steal of two in the eighth end.

Canada came to South Korea having won three straight Olympic gold medals in men's curling, and had never failed to reach the final since the sport was reintroduced 20 year ago.

"It's hugely disappointing," Koe said. "What more can you say? You don't have to say much else."

Canada's latest setback at Gangneung Curling Centre came on the heels of Rachel Homan's inability to even reach the playoff round — the first time the country has failed to medal in the women's draw.

John Morris and Kaitlyn Lawes did win gold for Canada in mixed doubles, which made its Olympic debut in Pyeongchang last week.

The American men will now take on Niklas Edin in Saturday's final after Sweden downed Switzerland's Peter de Cruz 9-3 in eight ends in the other semi.

The bronze-medal game between Canada and the Swiss goes Friday.

Still, the Canadians felt in control tied 2-2 in the eighth end until the U.S. stole two. Koe hit the guard with his first rock before a follow-up draw fell way short, allowing the Americans to take a 4-2 lead.

"If my first rock doesn't rub and we get by, we're probably getting two," said Koe, who lost 8-6 to Switzerland in the round robin. "We weren't really in trouble that end at all. That's kind of what's frustrating."

Holding the hammer in the ninth, Canada was looking to score two with a tap back, but had to settle for one after Koe's last rock rolled out to trail 4-3.

The Americans held the hammer in the 10th, and secured their gold-medal berth when Shuster hit and stuck for the win.

"You play a game that comes down to millimetres," Kennedy said. "It's a really (expletive) hard game at this level, right? You're playing guys that are playing really well. You're not going to win every game. That's just the way it is.

"Sorry about the F-bomb."

Competing at his fourth Olympics, Shuster was 1-9 against Koe before this season in all competitions, but has since ripped off three straight wins.

"There's just a lot of parity and you're seeing the field from top to bottom be better than it's ever been," said the 2006 Olympic bronze medallist. "Everybody keeps raising the bar."

Canada had combined for 10 medals (five gold, three silver and two bronze) in team curling heading into Pyeongchang, but Kennedy said anyone paying attention to the sport internationally knows other countries have closed the gap.

"It's overplayed that Canada's a favourite," he said. "We come from a rich history of curling where we won everything, and that's not the way it is anymore.

"This is the new normal for Canada, and people need to get used to that. Canada will be fine. We've still got the best curlers in the world. When it comes down to one game here and there, it happens."

At the opposite end of Gangneung Olympic Park from where the U.S. women's hockey team beat Canada 3-2 for gold in a shootout hours earlier, chants of "U-S-A! U-S-A!" started inside the curling rink 20 minutes before the first rock was thrown.

Canadian ice dance gold medallist Scott Moir, who made an impression at the hockey final with his energetic cheering, was in attendance — once again with a beer in hand — but was much less demonstrative.

After blanking the first end, the teams traded points for a 2-2 tie after five before also blanking the sixth and seventh.

That's when Shuster pounced on Koe's mistake in the eighth to grab hold of the game.

"I'm not disappointed in our effort," Kennedy said. "We played our asses off all week to get in (the semifinal). We ran into a hot skip.

"This isn't the end of the world. It's a sport that we love, and sometimes you're on the losing end."

Koe's team wrapped up the preliminary round at 6-3, just behind Sweden (7-2) to secure a spot in the semifinals.

The Canadians won four straight to open the tournament before dropping three in a row, including a 9-7 loss to the U.S. (5-4). But they rebounded to wrap up the round robin with back-to-back victories, including Wednesday's 8-3 victory over Denmark — the team they beat for the 2016 world title.

Now their attention turns to salvaging a spot on an Olympic podium.

"We don't want to go home empty-handed," Koe said. "As much as this sucks right now, if we can come out and play well and win (Friday) and go home with a medal, that'll help take some of the sting off it." 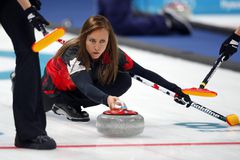