Before this past week, U.S. Olympian Ryan Lochte was going to be mostly known for two things: being an incredible swimmer who had the misfortune of competing in the Michael Phelps era and also being one of the dumbest jocks on the planet.

There are YouTube compilations of some of his more spectacularly inane utterances. One is titled: Worst Interviews. His answers to questions include: "What defines me? Ryan Lochte." "Seven times four? Twenty one." "What I've always been good at is letting things go in one ear and out the other, so to say."

Hollywood thought it could make a buck off his dim-wittedness, giving Lochte his own (disastrous) reality-television show called: What Would Ryan Lochte Do? Of it, Variety said: "The producers don't mind portraying him as a skirt-chasing airhead, albeit one who loves his mom." Seth MacFarlane once played Lochte in an infamously hilarious Saturday Night Live spoof that played up the swimmer's frat-boy shallowness and valley-boy cadence. He is as well known for his vainglorious affinity for flashing his impressive rack of abs as his exploits in the pool.

The point here is not to be cruel but rather to point out that if there was anyone stupid enough to believe he could fake a robbery at the Olympics and enlist teammates in the deceit, it was probably Mr. Lochte. And now it appears that his quickly unravelling fable is destined to catch up with him.

On Thursday, Brazilian police produced video evidence that appeared to contradict the version of events Mr. Lochte and his teammates originally gave police and media. Even before that, Lochte seemed unable to keep his own story straight. One minute, a robber had put a gun to his head; the next, he hadn't. He said the robbery happened around 4 a.m., a fact undermined by video showing the swimmers leaving an Olympic party more than an hour after that. Lochte put his troubled recall down to "traumatic mischaracterization."

It now seems increasingly doubtful that Mr. Lochte, as he had insisted, refused to budge when one of the purported robbers told him and his teammates to hit the ground. (He said his teammates complied immediately). It takes gall to make yourself look like the tough-guy hero in a fictional story while portraying your teammates as obsequious wimps.

The investigation, meantime, continues. Mr. Lochte is back in the United States, out of the reach, temporarily, of Brazilian authorities. His teammates in the caper have had their passports seized (two were yanked off a plane destined for the States) and remain in Rio. Where this matter ultimately ends up is anyone's guess.

For now, Mr. Lochte is sticking to his guns and insisting the robbery occurred. That would seem like an increasingly fraught strategy. At some point, it would appear the entitled quartet are going to have to come clean in the face of mounting evidence that indicates they not only lied, but were in fact the ones up to no good. Brazilian authorities said the four men indeed had a run-in, but with security attendants at a gas station where the swimmers had their taxi stop so they could use the bathroom. When they found the door locked, they allegedly broke it down. When confronted over the damage, the swimmers are said to have become hostile before finally giving one of the attendants an undetermined sum of money for the destruction they caused.

"The only part of the story they told us that is true is that they were drunk," one Brazilian investigator told reporters.

Initial reports of this story reverberated around the world because of the high-profile identity of the alleged victims.

Needless to say, it was deeply embarrassing for the Olympic host country, which has been battling several negative headlines linked to crime and the muggings of athletes and visitors alike. You can imagine how badly Brazilian authorities would like to prove to the world that the swimmers' story was an invention, thereby negating some of the reputational damage the country suffered as a result of it.

As for Mr. Lochte, what can be said? He is an incredible swimming talent with 12 Olympic medals to his name. But he will also be known for the lengths to which he went to make himself look like one of the slowest athletes alive. 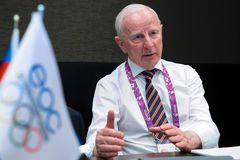