Sometimes you just have to drop everything and celebrate – and this one had it all: hugs, whoops, and not a few tears.

After obliterating a seven-year-old Canadian record in the women's 400-metre freestyle at the national Olympic trials, 18-year-old Brittany MacLean raced through her poolside television duties and made a beeline for a gaggle of bouncing teammates and friends, who quickly swallowed her in a joyous embrace.

"I have the best friends in the world," said a breathless MacLean, whose record-setting swim in Montreal's Parc Olympique pool earned her a ticket to this summer's Olympics in London.

And did she know she could pull it off in 4:06.08, shaving more than a full second off Brittany Reimer's mark from July of 2005?

MacLean is doubly excited at the prospect of going to the Games with her 19-year-old sister Heather, a former national record-holder in the 200-metre freestyle.

"It's been our dream since we were the littlest girls. She's been my No. 1 fan and I've been her No. 1 fan. I'm just so excited for her. I know she's got it in her. I couldn't be happier and I can't wait to see her," she said.

MacLean has been swimming competitively since she was seven – she won a world title at the World Junior Championships last year and reached the 'B' final at the senior Worlds – and said she turned to freestyle partly because of a shoulder injury in the butterfly, and partly to emulate her sister.

"I just wanted to be exactly like her from day one. I've always looked up to her. She is my idol," she said.

Six swimmers qualified for the Olympics on the first day of the weeklong trials, including Blake Worsley (200-metre freestyle) and 27-year-old Scott Dickens, a Vancouver-based athlete who atoned for a poor showing four years ago by winning the 100-metre breast stroke.

"In 2004 I made the team as a 19-year-old, in 2008 I went into that trials ranked first in Canada, the best 100-metre breast-stroker, and I didn't make the team. I went slower than the year before when I won gold at Pan-Ams, I was in the mindset that I was supposed to make it," he said.

But shortly after the disappointment of missing out – and having some national team cohorts say 'so, you're done' ("That hurt inside," he said) – Dickens found the inspiration to carry on.

"I went to see a school in my home town and I gave a talk . . . seeing the look on [the students']faces, standing, cheering, screaming my name, I knew then I had a job to do," he said.

Dickens' exploits notwithstanding, day one of the national swimming team's Olympic selections belonged to the kids.

"You're looking at a bunch of young, up and coming kids who are setting the tone," said Swimming Canada CEO Pierre Lafontaine.

Savard, who hails from Pont-Rouge, Que., admitted she was nervous in her first Olympic trials, but said "now I can look ahead to the Games, I'm going to work even harder."

Page, a Grade 11 student who was born on tiny Cortes Island, B.C., had his competition routine disrupted by students outside the team hotel protesting tuition fee hikes.

"I napped before it, I was fine," he smiled. 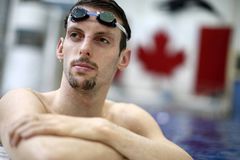