Before she stood on the podium as the gold medal winner in women's moguls on Saturday, Justine Dufour-Lapointe reached out to grab the hand of her older sister Chloé. She didn't have far to reach. Cholé was standing next to her in the silver medal spot.

"I said, 'We're going to live that moment together,'" Justine recalled afterward. Having her sister there "made me more grounded. It's something so big, going up on this podium, but I felt so much more at home having Chloé next to me and holding her hand. I felt ready to step up on that podium."

Cholé too held on tight. "To be able to live that moment, with my little sister, it means so much to me," she said. "We're close and we're going to stay close."

Their third sister, Maxime, the oldest, stood in a crowd of well-wishers, tears flowing. She had finished out of the final six in the race, but felt just as much a part of the journey. "The path that we walked, we did it side by side," Maxime said after hugging their parents, Johane Dufour and Yves Lapointe. "I'm very proud of them. I'm lucky I have the two best in the world to learn from. You can't ask for more."

After the first full day of official competition Canada has three medals:

In a sign of their new found fame, the sisters nearly had to stop their post race press conference because the Prime Minister was trying to call. Justine asked if he wanted to speak with them individually or on a conference call.

It was a remarkable night for "3SDL"as they like to call themselves. Les trois soeurs Dufour-Lapointe from Montreal; Justine age 19; Chloé, 22; and Maxime who turned 25 on Sunday, just hours after her sisters won their medals around midnight on Saturday.

Just consider the achievements: two sisters taking gold and silver with a third making it to the second-last round of 12 skiers; the youngest champion ever in the event; Canada's first gold and silver medals of the Sochi Olympics. Justine and Chloe join French skiers Marieele and Christine Goitschel and Austrian lugers Doris and Angelika Neuner on the short list of sisters to win Olympic gold and silver in the same event.

And, both sisters defeating the defending Olympic champion, Hannah Kearney of the United States who was considered the runaway favorite to win the race. Kearney finished third, crying as she left the stadium and feeling defeated by the course. "Thanks for your positivity," she said with a strained smile after someone congratulated her on taking the bronze.

But it shouldn't have been a surprise. Ever since they watched their older sister take up moguls at the age of 11, Justine and Chloé begged their parents to let them try too. "We said, 'Hey, why not us, we want to follow our older sister. She's cool, she's doing all those tricks why not us," recalled Justine.

They did and it wasn't long before both surpassed Maxime and were closing in on Kearney. Justine in particular closed the gap little by little with the American in each of the last four years. And on Saturday during each round of the finals, Justine skied with steady consistency, staying in the top five in each run while Kearney stumbled. Justine's last run was even better and extinguished whatever hope Kearney or anyone else had of winning.

"The last run was my run," Justine said. "I skied for myself and being out there winning a gold medal with Chloé, I'm living the dream right now."

Her parents could barely contain themselves and Justine remarked that they seemed happier than their children. "They are so cute," Mr. Lapointe said during a brief pause from jumping madly around the venue.

"I'm so happy and proud for them," added Ms. Dufour. "Because they worked so hard to get that, to be there, all three of them. Two medals, yes, but the most important is that there are three Dufour-Lapointe sisters here tonight. That's the most important to me."

The family shared something close to a group hug with Maxime immediately after the race, tears streaming down all their faces. Later Mr Lapointe talked about how they spent time together skiing and sailing. "We used to get up at 6:00 am so we could arrive for the opening of the ski lift."

Justine paused briefly to reflect on the many years she has been skiing with her sisters, who are also her best friends. "We always skied together," she said. "Today we are all together at the Olympic Games. This is the most satisfying feeling that we made it together. It's kind of cool." 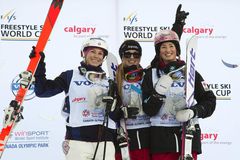 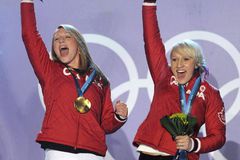