There was a time in Melody Davidson's coaching career when female referees and linesmen would skate to the bench after a game and shake the hands of her male assistants.

"They didn't even recognize a female would be a head coach and they were females," she said.

The NHL is full of hockey executives who hire former teammates or people who have helped their careers in the past — Maple Leafs president Brendan Shanahan hiring Lou Lamoriello as GM just one example.

There are currently few women in hockey who have the power to give other women paying jobs.

"For men to advance, it's all about who they played hockey with and who they grew up with. That's how they advance in a lot of cases right? Women need to have that same connection.

"The more we have coaches coaching in the Olympics and world championships that are female, the bigger that group forms."

Schuler, the first former Olympic player to be Canada's head coach, started her coaching career at her alma mater Northeastern before working as an assistant to Miller at the University of Minnesota-Duluth from 2008 to 2016.

"Before that, there really wasn't much opportunity for full-time positions in the women's game. It was just a timing thing where I felt very fortunate that when I retired, those opportunities were coming about."

Murray, the 29-year-old daughter of former NHL coach Andy Murray, played for the UMD Bulldogs under Miller and Schuler from 2006 to 2010.

Diaz, 35, is a former Swiss team player who became the first full-time female head coach of their national women's team in 2016.

"The fact that three of the eight teams are going to have a female head coach just means the landscape is changing and there's going to be that opportunity there in other countries besides Canada," said Davidson, who is also the International Ice Hockey Federation's female coaching mentor.

"Federations have paid attention, they've listened, they've seen and they started to provide opportunities for females within their club systems and within their countries."

Women's hockey made its Olympic debut in 1998. There is now a community of retired players in the coaching ranks and some working their way back to the national team benches they once occupied as players.

Diaz's assistant coach in Pyeongchang is Angela Frautschi, who won Olympic bronze with the Swiss women in 2014.

The Swedish Ice Hockey Federation announced in November that Ylva Martinsen, an assistant captain on the 2006 Olympic silver-medal team, will take over as head coach after the Olympic Games.

Three-time Olympian Danielle Goyette, who has coached the University of Calgary women for a decade, was Canada's assistant coach at the 2014 Winter Games.

"For me, obviously having great female mentors along the way and allowing me the opportunity, it's important now for the females that are in our current positions as leaders to continue to mentor other females along the way, so they'll have that opportunity in the future," Schuler said. Team Canada looks to make the most of a once-in-a-lifetime hockey opportunity
February 9, 2018 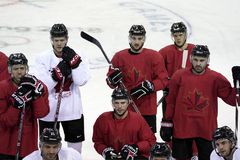