CBC and Radio-Canada announced Wednesday that it is the successful bidder for the rights to those Olympics: the 2014 Winter Games in Sochi, Russia, and the 2016 Summer Games in Rio de Janeiro, Brazil.

CBC previously was bidding with CTV, but the private broadcaster, which has lost money on its ownership of the 2010 and 2012 Games, dropped out this year, leaving CBC to bid alone.

CBC did not disclose the cost for the contract, but it was known that the International Olympic Committee turned down an earlier $70-million bid from CBC and CTV. CBC executive Kirstine Stewart said a long-established Olympic track record helped it nab the rights after two joint proposals with Bell Media were rejected by the IOC. Stewart vowed CBC's solo bid would not further cut into the public broadcaster's hefty budget woes.

"We actually made sure that this was, based on our prior experience, a cost-neutral proposal," said Stewart, predicting broad coverage on CBC, SRC and multiple digital platforms.

"This isn't a deal that's built to cost the CBC money and in fact, what we're hoping for is a bit of a profit out of it."

The sticking point for broadcasters, advertisers and the IOC itself is whether the NHL will participate in the 2014 Winter Olympics in Sochi. Without the best hockey players in the world on hand, the IOC's rights are worth perhaps half of the $70-million figure. The league and its players are expected to resolve the dilemma of NHL participation in Russia during their current collective agreement negotiations.

Even if they cobble together a deal, it is clear this will be the final participation under the current setup in which the IOC gets the diamonds and the NHL gets the shaft financially. Any future participation will guarantee a cut of the IOC's profit or the NHL will develop its own World Cup.

The NHLers are not alone.

The first week of Olympic basketball has brought suggestions from NBA commissioner David Stern and some of the league's greatest stars that the Dream Team formula has played itself out – without the NBA getting a piece of the action. Stern is suggesting that an under-23 tournament (which soccer uses) replace the current open competition. Stars with ties to shoe companies such as Nike want to see what would replace the Olympic commitment before they make a move.

The IOC is feigning disinterest, saying all is well with its empire. But it's clear that the open competition formula that succeeded amateurism has reached a crossroads. Hockey, basketball and soccer stars are intent on leveraging their Olympic appearances to the utmost, or creating new events to push their brands.

IOC president Jacques Rogge issued a comment after the protracted negotiations: "Canada is a sports loving nation, and Canadians are big fans of the Olympic Games. CBC/Radio-Canada has a wealth of experience in broadcasting sports and the Olympic Games, and we are pleased that we will once again be joining forces with them in the future."

CBC was desperate to stay in the TV sports game in Canada, facing the possibility of losing the NHL national rights in 2014. It had earmarked the return of the Olympics as a priority.

With the Olympic consortium of Bell and Rogers losing money on the previous contract, the IOC had a hard sell to get value on this deal. CBC chairman Hubert Lacroix told CBC News Network that CBC and its French-language counterpart, Radio-Canada, will be the sole rightsholder but could subcontract events to TSN so all events can be covered.

One CBC source said CBC didn't have to go as outrageously high as the Bell and Rogers consortium did when it bid an estimated $152-million for the 2010 Winter Games in Vancouver and the 2012 Summer Games in London.

"It'll be like past Games for us – break even or a tiny profit," said the source, who said he was not authorized to speak on behalf of CBC.

Raismans go viral: If you're a network suit, you can plan your televisioncoverage from every angle. But the last few days of coverage have shown that the Olympic Games have a mind all their own. For all the compelling athletic action and brilliant technical work, it's a video of the very involved parents of an American gymnast that has produced the most viral video so far.

The image of Rick and Lynn Raisman of Needham, Mass., doing syncro suffering in their seats as their daughter Aly performed has gone nuts on YouTube. In about 45 seconds, the writhing Raismans sum up the glory and terror of being a parent with a child in high-performance sport. The millions on the line in endorsements are secondary to the Raisman's tortured sense of completion in Aly hitting a terrific performance.

While the public was happy for the medal winners, they really wanted to talk about the Raismans, now ubiquitous meat puppets in media coverage.

"@danielstrauss: NBC is really nailing it by focusing on the two most important things in the #Olympics: Aly Raisman's parents and Jordan Wieber crying."

"@papermagazine: Watch gymnast Aly Raisman's parents react to her bar routine. There is something VERY Kristen Wiig about the mom".

Droll Golf TV star David Feherty perhaps summed it best on Twitter. "@Fehertwit: Watching the gymnasts. Each of them someone's beautiful baby girl. Can't imagine their courage, or how proud their parents must be."

As long as the gymnastics lasts, NBC will live by its next Raisman sighting.

The Raismans have strong competition in the parent category from a weeping Bert Le Clos, father of Chad, who hid his head in tension in the South African flag as his boy got the gold in a heartstopper versus Michael Phelps. Afterwards, Bert made the most of this barely intelligible BBC interview.

As for Aly Raisman she could only say, "@alyraisman: I love my parents."

Going The Extra Milos: Call it Breaking Bad, because neither payer could break the other in the third set. It's early days, but it will be hard to top the epic tennis match between Canada's Milos Raonic and Jo-Wilfried Tsonga as the most compelling Canadian event of the Games. There was no medal at the end, no anthems played when the Olympic record match ended in a loss for Raonic. But for sustained drama and media attention, it will be etched in many memories.

The endless match lasted 3 hours, 57 minutes, and there were 257 points, 91 winners, and 45 unforced errors and more plot twists than a season of Breaking Bad.

The match was called from a monitor back in Toronto on TSN by veteran Jim Van Horne and a largely unintelligible analyst Steven Warboys. Thank goodness words were not needed to sum up the challenge of the upstart Canadian trying to usurp the veteran Tsonga.

As the two men traded games in a third set that stretched to 25-23 for Tsonga, Twitter exploded with awe, mirth and admiration.

"jstuffco Only Snoop Dogg has been on the grass longer than Raonic and Tsonga today".

"@dowbboy Raonic/ Tsonga to be released as box set in time for Xmas." (You can follow our complete tweet stream @dowbboy.)

Raonic may or may not learn how to finish out matches against elite players, but if he does many will look back to the long day's rally into night as a turning point.

Rowdy Gaines of NBC with the final word on China's 16-year-old Ye Shiwen posting a faster 50-metre freestyle time than the male Olympic champion Ryan Lochte. Many have raised the spectre of a drug scandal. "You can't condemn her, there's no proof," said Gaines. Somewhere Justice Charles Dubin whispered a silent "bull feathers" in heaven.

Then there's another way to cheer lead for the Olympics as Consortium rowing analyst Barney Williams showed after young Canadian double sculls duo Kevin Kowalyk and Michael Braithwaite were smoked in their heat. ""A valiant effort," proclaimed the former Canadian rower. "Can you think of the motivation three years from now when you're on Elk Lake and wondering 'how hard do I have to train?' They now know how hard they have to train." When you out it that way...

Quotes that could only come from a Canadian. After failing to qualify by a large margin, sculler Kowalyk summed up the failed effort in a way only a native son could manage. "We gave her, and then we gave her some more. But it wasn't enough." Pass us a donut.

The, ahem, personal observation followed Henderson tweets about teenage Olympic swimmers. Sending Henderson into damage control, explaining that his libidinous remark was meant to be a private note to a mature friend who'd gotten his repechage in gear.

"Good Lord, that came on the heels of a blog about a 16-year-old girl?" Henderson told Denver Westward. "I really hope nobody made that connection." No, no, never. Course not. Okay, maybe.

Twitter users put Canadian Olympic broadcaster on pedestal
July 31, 2012
The promise and the pitfalls of a social-media Olympics
July 30, 2012 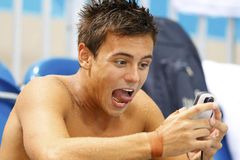