Long before she won two medals, shocked the swimming world and emerged as Canada's brightest star at the Summer Olympics, Penny Oleksiak was a nine-year-old who couldn't make a swimming team.

Gary Nolden remembers the day the little girl and her parents showed up at his office at Olympian Swimming in Toronto. Several other swim clubs had cut Ms. Oleksiak because she couldn't meet the minimum requirement to join – completing two lengths of the pool.

Olympian Swimming was a different kind of club. Despite the name, it wasn't set up to engineer future Olympians. It accepted beginners. The club's motto was: "Where kids love to come and love to swim."

Ms. Oleksiak's parents, Richard and Alison, were both former NCAA athletes. Their daughter had big feet, expansive hands, boundless energy and was growing like a weed. She enjoyed splashing around in the neighbour's backyard pool, so Alison – a former competitive swimmer – figured the water was a good outlet.

No one ever thought those swimming lessons would take her this far.

When the 16-year-old Ms. Oleksiak, who is listed at nearly 6 foot 2 and is still growing, collected her second medal of the Olympics in the women's 100-metre butterfly on Sunday night, it solidified her as the new star of Canadian swimming.

But there were early signs that Penelope – the name on her birth certificate – was an unusual and rare talent. Soon after she walked through Mr. Nolden's door, Ms. Oleksiak began outgrowing her age group. Then she turned to the older kids and started beating them.

"She was with me maybe half a year and I remember thinking, 'You know what? She's special; there's something different about this kid,'" he said.

"Kids on the club that were way older than her – three or four years older – she was just going after them every single practice. And everybody was just looking over their shoulder: 'Who is this kid?'"

The story that sums up Ms. Oleksiak best for Mr. Nolden is one particular practice when she was 10. He called on her to lead a group of 14- and 15-year-olds in drills. The swimmers were doing dips, a strength exercise in which they use their arms to lift themselves out of the water while facing the edge of the pool. Ms. Oleksiak was determined to show the older kids how it was done.

"So she runs over there, does her dips, and she does them so fast, she slips off the deck and knocks her teeth out," Mr. Nolden recalls. "There's a nerve sticking out of her tooth [socket]. And I look at it and go, 'Oh my God, Alison, Penny's got to go to the doctor.'"

Mr. Nolden expected Penny wouldn't be back for a while. But the next day, she was back in the pool, doing more dips. "Did not even faze her," he said. "She was that focused as a young kid."

At an early meet in Ottawa, Ms. Oleksiak got so far out in front of the other swimmers in a 200-metre race that she lost track of what lap she was on. As she paused at the wall in confusion, the field overtook her. Mr. Nolden then watched in disbelief as Ms. Oleksiak reeled them all in, completing her final 50 metres in a time that was at least 10 seconds faster than her opening leg. "She was just a phenom," he said.

Ms. Oleksiak's ability to finish strong has been on display in Rio. On Saturday, she anchored the women's 4x100-metre freestyle relay team to a bronze, holding off a charging Dutch swimmer to claim the medal. It was Canada's first trip to the podium in Rio. She did it again on Sunday, overpowering American star and Olympic gold-medalist Dana Vollmer in the home stretch of the 100-metre butterfly to steal the silver.

It takes many people – from coaches to parents – to build an Olympian, and Mr. Nolden is careful to point out that he was just one of several who helped Ms. Oleksiak develop as a swimmer. On Monday, with two medals draped around her neck, she paid tribute to those coaches, heaping praise not only on him, but also on her more recent mentors: Bill O'Toole and Bob Hayes at the Toronto Swim Club, and Olympic coach Ben Titley.

Each has had to contend with her growth spurts over the years, which have blessed Ms. Oleksiak with a long torso perfect for the sport but have wreaked havoc on her co-ordination. At times, it seemed as though she'd never stop growing.

"It just seemed like every time Penny came to practice, she was an inch taller. It really was that fast," Mr. Nolden said.

Sometimes that affected her stroke. "We were trying to retrain Penny to know where her fingertips ended all the time," he said.

The Oleksiaks are a tall and athletic bunch: Her father is 6 foot 9, while her older brother, Jamie, is a 6-foot-7 defenceman with the Dallas Stars. Her sister, Hayley, is an NCAA rower at Northeastern University in Boston. The siblings, who were in Rio to cheer her on, also share the same competitive drive.

"We play board games and it gets pretty rough. We try to avoid it sometimes – just because," Ms. Oleksiak said. "We're not together superoften, but when we are, it's usually pretty fun. I mean, someone's probably usually crying by the end of the night because we annoy each other a lot. But usually it's a fun time."

"I didn't think I would really get anywhere when I first started swimming," she said. "But I think having a lot of clubs turn me down and stuff, and coaches trying to make me better, really helped me just because I always wanted to get better."

Of all the memories Mr. Nolden has of Ms. Oleksiak's rise to swimming prowess, there is one in particular that sticks with him. It is a bittersweet moment for any coach: Penny was almost 13 years old and winning nearly every race against her age group. She needed a bigger challenge.

"She needed that next step that the kids in our program couldn't give her," he said. "I sat her down and I said, 'Penny, I think that you are special, and I think you can do something amazing in this sport.'"

It was time for Ms. Oleksiak to go.

"I wanted to make sure Penny didn't think that I was abandoning her and that I didn't want to coach her."

Ms. Oleksiak moved to a bigger club and continued developing. Watching her win the silver medal on TV Sunday night, surrounded by other members of Olympian Swimming, was one of the proudest moments of Mr. Nolden's career.

"She was that different. You just saw the talent. It was raw talent. And you just saw it." 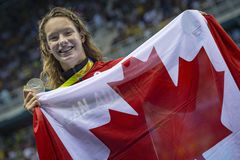 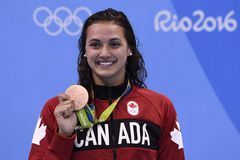 Canadian swimmer Penny Oleksiak wins silver in 100-metre butterfly
August 7, 2016
Follow us on Twitter @globe_sports Opens in a new window
Report an error Editorial code of conduct
Due to technical reasons, we have temporarily removed commenting from our articles. We hope to have this fixed soon. Thank you for your patience. If you are looking to give feedback on our new site, please send it along to feedback@globeandmail.com. If you want to write a letter to the editor, please forward to letters@globeandmail.com.
Comments