He says he'll shift his focus to the new discipline rather than the traditional four-man game.

"I love team curling and I've done it for many years," Morris said Wednesday. "But I found that what was more motivating and really got my juices flowing a bit more was mixed doubles, just because it was something new and it was something exciting."

Morris teamed with Kaitlyn Lawes for a 10-3 rout of defending world champions Martin Rio and Jenny Perret of Switzerland in Tuesday's final at the Pyeongchang Games.

It was the second Olympic gold medal for both players. Morris won with Kevin Martin at the 2010 Vancouver Games and Lawes took the women's title four years ago in Sochi with Jennifer Jones.

When Lawes returns home, she'll turn her attention to preparations for next month's world women's curling championship in North Bay, Ont. Jones recently won the national title with Shannon Birchard filling in for Lawes at third.

As for the four-man Team John Morris, changes appear to be on the horizon. Morris has posted mixed results with a variety of teammates after parting ways with Martin five years ago, but he has struggled this season.

The 39-year-old, who has also won junior, national and world crowns over his career, said his excitement for the four-man game has dipped recently. Mixed doubles helped restore his drive.

"That passion that I found again, it was amazing," Morris said. "It felt great to be out there."

Morris played several mixed doubles events with Rachel Homan over the last two seasons. Lawes agreed to replace her when the Ottawa skip qualified for Pyeongchang in the women's team event.

Morris and Lawes had a so-so start at the Olympic trials before finding their form. After a 9-6 opening loss to Norway in Pyeongchang, they ran the table and outscored the opposition 64-24 along the way.

"With mixed doubles, you're going to have your highs and lows," Morris said. "It's the teams that don't panic, roll with the punches, stay as a tight-knit group, and adapt and overcome some adversity, that's the team that's going to win. I felt we did that really well this week."

Lawes, a 29-year-old from Winnipeg, said the mixed doubles game brought the love for curling out of them.

"It brought back that youthful energy of wanting to make every shot even though we knew that it wasn't going to be like that," she said. "We knew we weren't going to be perfect but it was just so fun to play and be a part of something so unique and special, especially for the first time."

Morris said he's excited about the sport's potential in burgeoning markets like Asia, and finds the prospects of a World Cup-style mixed doubles events intriguing.

He plans to sit down with Lawes "once the dust settles" to discuss potential mixed doubles plans.

A resident of Canmore, Alta., Morris works as a firefighter outside of Calgary. The idea of trimming team events from his curling schedule is appealing.

"Moving forward I'm at a slightly different stage in my life now," he said. "I want to focus on family and I want to focus on my career a bit more. I don't want to leave curling because it's been such an important part of my life. But (mixed doubles) would be an easier transition because the commitment isn't as much.

"It's maybe a quarter or a third of the time and that would be a great transition for me. To be able to only have to commit only one or two weekends a month rather than 15 days a month, I think is something that I really look forward to."

Coach Jeff Stoughton, who has overseen the mixed doubles program for Curling Canada, has been impressed with the way elite team players have embraced the discipline. After the next four-year cycle, he expects curlers will choose to focus exclusively on either mixed doubles or team events.

"That's the whole goal," Stoughton said. "You don't see a long-track skater trying to do short-track. This is sort of along similar lines. So that's what we envision long-term for sure. Short-term I think we keep doing what we're doing."

And it looks like Morris will be one of the anchors on the mixed doubles scene.

"He is a wonderful ambassador for mixed doubles," Stoughton said. "There is no doubt about it. All the other top competitive players are embracing this game but to have John in your back pocket is pretty special." 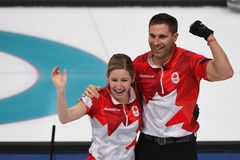 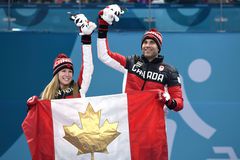