Forty years ago, when the United States enacted Title IX, the landmark gender-equity legislation, just one of seven athletes at the 1972 Munich Olympics was a woman.

The change is a direct result of Title IX, legislation that runs only 37 words and does not even mention sports.

The law emerged in June of 1972 to specifically prohibit discrimination on the basis of gender in "any education program or activity" that received federal funding. The broad wording quickly hit university sports, where inequity was severe.

On just one measure, scholarships for women's sports were essentially non-existent.

Title IX forced schools, many of them reluctantly, to invest proportional dollars in women's sports compared with men's, in facilities, coaching and general funding. Its impact took time to percolate, as the broad legislation was codified – and fought over – through the 1970s, but since the early 1980s, the number of women playing sports at college and university in the U.S. has tripled to nearly 200,000.

The figures have surged every Olympics thereafter. The reason: Even though Title IX is domestic legislation in the U.S., the competitive arena of sports propelled its intent around the world. As American women succeeded, backed by money that hadn't been there before, other countries invested in women's sports as well.

"There is a direct correlation between Title IX and the success of women, not just U.S. women but all women, at the Olympics," said Mary Jo Kane, a professor of sport sociology at the University of Minnesota and an expert on Title IX.

"Every country wants to raise their game, and if the U.S. women are setting the standard, that just means women around the world have to raise their standard. I don't think you can overstate the importance and significance of Title IX."

Women have become central to the Olympic narrative this year, particularly for Canada and the United States. Women have won the majority of the golds hauled in by the U.S. Of Canada's 17 medals, more than half – nine – have been won by women, including the country's only gold, Rosie MacLennan in trampoline, and the showcase win by the women's soccer team for bronze.

Yet equality is hardly at hand. At the Olympic level, there are still more men at the Games, and more sports for men. The Winter Olympics are behind the Summer Games. Women accounted for 40.7 per cent of the athletes at the Vancouver Olympics, according to data from the International Olympic Committee, which is a proportion first reached at the Summer Games in Greece in 2004, six years earlier.

In terms of attention, women also lag significantly. Usain Bolt receives notably more coverage than his countrywoman, Shelly-Ann Fraser-Pryce, who like Bolt won a second consecutive Olympic gold in London in the 100-metre dash after victory in Beijing four years ago.

On the soccer pitch, Canada's women's team may have kept the country riveted, and a huge crowd of more than 80,000 attended the U.S.-Japan gold-medal game in London, but the women's pro game barely exists. In North America, Women's Professional Soccer went bust this year after only three seasons, though several of the teams are attempting to revive it for next year.

Funding remains a problem, especially at the grassroots level. Research from Queen's University law professor Kathleen Lahey shows men and boys get more money for their sports than women and girls.

Inequity is most obvious at the management level. According to IOC research of national Olympic bodies and sports federations around the world, women are in charge of less than 5 per cent of the total, and account for less than 20 per cent of executives of those organizations – just like the IOC itself, which has a single woman on its 15-member executive board.

"The revolution is incomplete," Cheryl Cooky, a kinesiology professor and Title IX expert of Purdue University, said in a May press release. "There are major inequities and shortcomings remaining for female athletes, especially in terms of media attention and opportunities to coach and lead."

For Kane, who is 61, challenges remain for women in sport, but she knows from her own girlhood the huge advances made in the four decades since Title IX. She grew up in the small city of Bloomington, Ill., in the 1950s and 1960s, a "typical tomboy," playing baseball, basketball and touch football with the boys.

"There wasn't a team for me, let alone a scholarship," she said in an interview Friday.

"They talk," Kane said, "about watching the Olympics as little girls and remember saying, 'I want to do that too.' And they have. They are no longer tokens or outliers or tomboys." 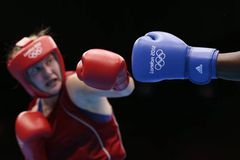 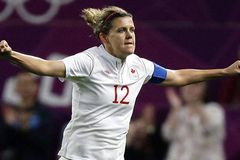