It happens without fail at almost every Olympics – while the public complains about how impossible it is to land a coveted ticket, television footage picks up rows of empty seats for sold-out events.

London is no different.

Organizers had vowed to avoid the mistakes in Beijing where volunteers were rushed in to occupy swaths of empty seats at many venues at the "People's Olympics" in 2008.

The problem is that approximately 25 cent of all tickets are allocated to the so-called "Olympic family" of sponsors, official committees, media and athletes, and many of these tickets go unused.

Organizers are now scrambling to fill rows of empty seats at some venues and they plan to call in soldiers, teachers and school children to help out. The vacancies have become a sore point after more than a million people missed out in the first public sale of tickets, while others waited in line for hours to pick up tickets.

Tickets for the unused matches are being resold for as little as $10. That's significantly less than the original price for the cheapest ticket at the London Games at $32. The most expensive seat for the men's 100-metre final – considered the marquee sports event at the games – came in at $1,160 originally.

Sue Sinclair, a Vancouverite who has tickets for tennis and swimming with her husband and two children, called it a "shame" that vast chunks of the venues were inaccessible to sports fans. She, too, said picking up tickets was a "hassle."

"It would just be better if all the seats at the venues were being used. It's such a shame for them to go empty," she said. "If we didn't have some tickets, we would definitely be super upset."

In some cases, those with tickets are being offered upgrades to better seating. And organizers have a plan to recycle tickets from events involving doubleheader games in sports like field hockey, basketball and handball. For example, ticket holders often show up wanting to see one team and then leave for the second game.

Some Australian swimmers complained about the poor crowd Saturday, saying they were disappointed more people were not in the stands to watch them win a gold medal in a relay.

"We would have loved to have more Australians in there to witness what these girls did last night. We were a bit disappointed," Australia's chef de mission, Nick Green, told reporters.

Faye Sultan, the first female Kuwaiti swimmer to compete at the Olympics, tweeted the ticket fiasco was "ridiculous."

"Empty seats at the olympics?!! And my parents can't get tickets to watch me swim?! Ridiculous #Olympics #2012."

The goal for London Games organizers was to emulate the success of the Vancouver 2010 Winter Games, where, aside from some cancelled events due to soggy weather, fans filled the majority of seats.

Winter Olympics are always smaller affairs that their summer counterparts, but Vancouver was a success even compared to its predecessor in Turin. Some officials credited the success to hosting fewer events and the popularity of winter sports in Canada. The Vancouver Organizing Committee also pressed corporate sponsors to give up tickets they weren't intending on using.

In London, organizers are encouraging soldiers working at various venues to sit in empty seats.

"If we've got the army sitting there either on rest periods or in transition, [we'll] ask them if they want to sit in there and watch if they can," said Sebastian Coe, who chairs the London Organizing Committee of the Olympic Games.

He declined to blame Olympic sponsors, whom he had earlier promised to "name and shame" if they did not use their allocations.

Mr. Coe tried to play down the issue overall.

"I'm pretty sure that this is not going to be an issue that we are going to be talking about in three or four days time as we start emerging from the preliminary round," he said. 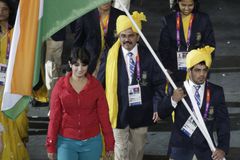 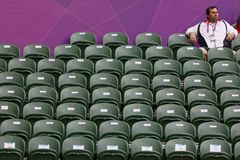