Images are what fuel Olympics, and South Korea, eager to show the world a picture of peace, delivered them in potent succession Friday at the opening ceremony of the Pyeongchang Games.

There was South Korean President Moon Jae-in happily shaking hands with Kim Yo-jong, the first member of the North Korean Kim family's inner circle to step on South Korean soil. There was a unified Korean Olympic team whose white-clad athletes marched in as a group, North Koreans and South Koreans visually indistinguishable from a distance. There were a pair of hockey players from opposite sides of the peninsula's 38th parallel, carrying a flaming torch in lockstep toward the Olympic cauldron.

The reality, of course, remains far more complicated. The heavily militarized demarcation line that separates North and South Korea passes less than 100 kilometres from the opening-ceremony stadium. North Korea has given no indication that it has halted, or even slowed, its pursuit of nuclear weapons despite outward signs of new co-operation with South Korea.

But for a night in a chilly stadium refulgent with fireworks, it looked – and felt – to those watching as if maybe things could be different.

"It really was a meaningful moment," said the Seoul woman.

"It really felt like we were meeting, we were here as a group."

"This is one step closer to peace," said John Kwon, an American-born Korean man. "This is a good thing for the world. It shows everyone we can all work together."

The ceremony's main program, too, traced the journey of five time-travelling children searching for peace, all the while celebrating South Korean cultural and technological prowess. Athletes walked in to the universally familiar beat of South Korean pop song Gangnam Style and snowboarders in glowing costumes ripped down a mountain while a formation of lighted drones assembled an aerial Olympic ring.

Yet the hostilities of a divided peninsula stood not just in the background, but on full display in the dignitaries' box, where U.S. Vice-President Mike Pence sat only a few metres from Ms. Kim – close enough to exchange greetings.

But the two did not interact, according to Mr. Pence's office.

Prior to the ceremony, Mr. Pence stayed only five minutes at a dinner arranged by President Moon, with a guest list that included North Korea's nominal head of state Kim Yong-nam. Mr. Moon and Japanese Prime Minister Shinzo Abe both shook hands with Mr. Kim. Mr. Pence did not, the Yonhap News Agency reported.

Earlier in the day, Mr. Pence reiterated a hard-line stance toward North Korea.

"The simple truth is that the time has come for North Korea to permanently abandon its nuclear and ballistic missile ambitions, to recognize there is no future as a member of the family of nations for a nuclear-empowered North Korea," he said.

That continued state of high tension stood at odds with the optimism of International Olympic Committee president Thomas Bach, who cheered the joint entry of Korean athletes to the opening ceremony as "a powerful message of peace to the world."

Even those moved by the sight acknowledged that this image was likely to be as ephemeral as it was powerful.

"It might be my first and last time watching those two athletes" – the hockey players from the two Koreas – "holding the torch together," Ms. Chung said.

With a report by Cynthia Yoo 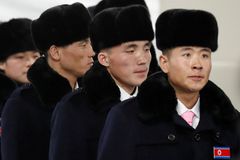 Pyeongchang 2018: What you missed from the opening ceremony and day 1 of the Winter Olympics
February 14, 2018 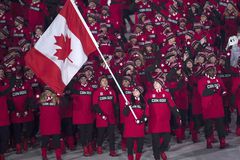 Finding my father at Yongpyong: a Winter Olympics journey decades in the making
February 12, 2018