The chiefs of several Olympic teams, Canada's included, are warning that many of their athletes will be no-shows at the opening ceremonies Friday because Danny Boyle's extravaganza is starting too late in the evening.

In an interview Monday, at the Canadian team's outfitting centre in London, chef de mission Mark Tewksbury said: "For sure, not all of our athletes will come. It's a long, long night."

The British Olympic Association has complained the show is putting entertainment before sport and expects fewer than half of Britain's 542 athletes to attend the £27-million ($42.6-million) opening ceremony.

The event, which is being directed by Boyle, the Englishman best known as the director of Trainspotting and Slumdog Millionaire, is scheduled to start at 9 p.m. local time (4 p.m. EDT) and to finish at about midnight – though dress rehearsals reportedly have gone a half-hour over schedule.

Canada is lucky because its athletes will be among the first wave to parade through the Olympic Stadium. Tewksbury, who won gold in the 100-metre backstroke at the Barcelona Games in 1992, said the Canadians have to reach the "marshaling" area at 8:15 p.m. and expect to parade through the stadium at 10:30 p.m.

But since the teams enter in alphabetical order, most will make their appearances later in the evening.

As representatives of the host country, the British team will come last. It does not expect to enter the stadium until 11:30 p.m. and any delays in the technically complex show could push it to midnight local time.

Athletes in the swimming, rowing, cycling and rowing events, which begin on the first weekend, are highly unlikely to attend the opening ceremony for fear of not getting enough rest before their competitions. That means Canada's Ryder Hesjedal, who won the Giro D'Italia in May, will almost certainly be a no-show, because he is to compete in the 250-kilometre road race Saturday.

"The opening ceremony is supposed to be for the athletes," Lord Colin Moynihan, chairman of the British Olympic Association, told The Times of London. "There is no athlete who goes to a Games who doesn't want to be part of the opening ceremony. It's at the heart of the event. But it's wholly reasonable to choose to be asleep."

Of course, any athlete who does not have to compete in the first 72 hours or so of the ceremonies is looking forward to parading before 62,000 spectators and watching Boyle's show, called Isles of Wonder.

"We're very excited about being there," said Jacqueline Brooks, who will be competing for Canada in the equestrian dressage event on Aug. 2 and 3. "We're really happy we won't be competing the next day. I would be very surprised to see any of the athletes who have to be compete in the morning at the opening ceremonies."

In spite of the complaints about the late start, Boyle is unlikely to move the start of the show any earlier because he needs darkness for the fireworks and the lighting of the cauldron.

The show's artistic features are still officially a secret, though the British newspapers have been leaking details for days. The Sunday Times reported one sequence would have 30 performers dressed as Mary Poppins, umbrellas in hand, descending from the sky to banish Lord Voldemort, the villain from the Harry Potter books and films.

The opening sequence reportedly will evoke the pastoral idyll – the "green and pleasant land" – described in William Blake's poem Jerusalem. Livestock will appear during this part.

The ceremonies, which will feature 10,000 performers, will open with the ringing of a 27-ton bell that was forged in London's 442-year-old Whitechapel Bell Foundry. 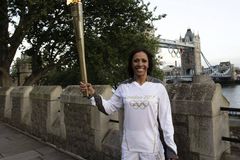