Police investigating reports that American swimmer Ryan Lochte and three of his teammates were robbed at gunpoint in a taxi so far have found no evidence supporting the account, and say the swimmers were unable to provide key details in police interviews.

Lochte's lawyer, Jeff Ostrow, said there was no question the robbery happened and that Lochte had 24-hour security hired after the incident. He hasn't been leaving his hotel room since.

"This happened the way he described it," Ostrow said.

According to Lochte and the United States Olympic Committee, the swimmers were returning to the athletes village by taxi after a night out at the French Olympic team's hospitality house in the Rodrigo de Freitas area in the upscale south zone of the city. The outing was several hours after Olympic swimming ended Saturday night at the Rio Games.

Travelling with Lochte were Gunnar Bentz, Jack Conger and Jimmy Feigen. Lochte swam in two events at the Rio Games, winning gold in the 4x200-metre freestyle relay. He is a 12-time Olympic medalist.

The group did not call police, authorities said, and officers began investigating once they saw media reports in which Lochte's mother spoke about the robbery. Police interviewed Lochte and one other swimmer, who said they had been intoxicated and could not remember what type and colour of taxi they rode in or where the robbery happened, the police official said. The swimmers also could not say what time the events occurred, or when they left the French house.

Later in the day, Lochte described the incident to NBC's Today show.

"And then the guy pulled out his gun, he cocked it, put it to my forehead and he said, 'Get down,' and I put my hands up, I was like 'whatever.' He took our money, he took my wallet – he left my cellphone, he left my credentials."

Word of the robbery initially created confusion between Olympic and U.S. officials. An International Olympic Committee spokesman at first said reports of the robbery were "absolutely not true," then reversed himself, apologized and said he was relying on initial information from the USOC that was wrong.

Scott Leightman, a spokesman for USA Swimming, said the

The incident got attention in part because of fears around street crime at the games. Athletes and visitors have been told to use caution around the Olympics. Street crime was a major concern of Olympic organizers and Brazil deployed 85,000 soldiers and police to secure the games, twice as many as Britain used during the 2012 London Olympics.

Authorities are treating the swimmers as victims and are continuing to investigate, looking for security footage at the French hospitality house and nearby gas stations to build a timeline of the night.

Rio police commonly struggle to obtain key information while investigating street crimes in Brazil as they encounter dozens of robberies a day in the violence-ridden city and lack the resources to get to the bottom of every case. Many such crimes don't even get reported by victims.

Fake police stops such as the one reported by Lochte happen in Rio, but are not common in that area, police say. They are typically a bigger problem in the poorer cities where police are less present.

Lochte signed a statement on Monday confirming the facts he provided, his attorney said.

"Ryan was 100 per cent co-operative and fully available when they reached out to us for an interview," Ostrow said. He added: "It doesn't behoove Ryan and anyone else to make up a story." 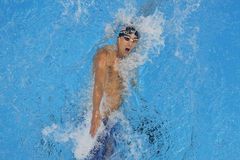