Over the soft strains of Jeff Buckley's "Hallelujah," you can hear the clarity of Patrick Chan's blades as they carve perfect lines in the ice.

The three-time world champion will retire after the Pyeongchang Olympics, and while his comeback hasn't gone completely to plan, the 27-year-old will be remembered for a strength in his skating that is unique in the sport.

"You know when you're looking down into a creek, with beautiful clear water, and there's a brook trout there, it's right there and then it's just gone. Like poof! Gone. And that's what Patrick is," Kurt Browning said. "He's on the ice with you and he's there, but now he's at the other end, and you're thinking 'How?'

"He just generates flow with every single touch of the ice . . . he just has a different way of creating kinetic energy with his blades."

Chan dominated the sport for three seasons. He was the overall package, his skating skills considered so much better than his opposition, he could fall on a jump and still win by a country mile.

The four-time world champion has skated alongside Chan in numerous shows, and the 51-year-old recalled being on the ice together for one particular performance. The choreography had them pass each other at one end (what would be behind the net in hockey), high five in passing, then take two crossovers to meet again at the blue line.

Chan's strength is perhaps most evident in his step sequences — a required element that has skaters travel from one end of the rink to the other while performing a complex series of different turns. Judges are looking for things like deep clean edges, good energy, and the ability to make it look effortless.

Said Canadian ice dancer and Chan fan Scott Moir: "You have to see him live.

"If you see him on TV, you can't feel your hair blow back when you're close to the ice. He's just got so much speed and command, that's what makes him Patrick Chan. We've been blessed to have that, and we're going to have a whole bunch of kids who come up with that same set of talent, because they watched Patrick Chan their whole life."

When Chan added a quad to his repertoire after the Vancouver Olympics, he was almost unbeatable for three seasons. He was adored by a legion of skating fans who would hurl lacy underwear — known as "Chanties" — onto the ice after he skated.

Then came his disappointing silver medal at the Sochi Games, and a year off. When he returned, he found his sport had completely changed. It was all about the quadruple jump. American teenager Nathan Chen landed five quads in his free program at the U.S. championships. Chan did two in his long program at nationals, and no amount of lovely spins and skating can make up the difference.

Chan could add a quad Salchow to the two quad toe loops he'll have in his free program in Pyeongchang. But two quads or three, he said he's made peace with skating's changed landscape. His focus is on loving his time on the ice.

"I know that if I can deliver what I have, and I deliver the way I've been training, with kind of like this new sense of confidence in my skating, I think it will make my experience more enjoyable, skating through the long program and actually wanting to go through kind of the grind of it, of a long program," Chan said.

The 10-time Canadian champion had a horrible Grand Prix performance at Skate Canada International in late October, finishing off the podium for the first time in eight years. In an effort to write a happy ending to his illustrious career, he left coach Marina Zoueva and his training base in Canton, Mich., to move to Vancouver. While his 11th-hour move might have puzzled some, Chan has always been about living a balanced life. He's a big believer in happiness as a key component to competing. Why spend his final days miserable?

Chan has been working with fellow Canadian Kaetlyn Osmond's coach Ravi Walia, who along with Oleg Epstein, will be Chan's coach in Pyeongchang.

Walia's first order of business was to reshuffle the jumps in Chan's free program to better maximize points. Otherwise, his relationship is more about being a pillar of support in Chan's finale.

"It's making sure that mentally he's in a good place," said the Edmonton-based coach. "He's hard on himself and he's really analytical. So, just to kind of keep him feeling confident, I think that's really important for him. And trusting himself.

"(At the Canadian championships) we decided that his main priority was to trust his training, because he has been working and is in good shape, so he felt he could actually enjoy it. Which of course at Skate Canada he didn't feel that way. So he actually felt like 'I'm trained, I can actually enjoy this performance.' So, I just want to keep him confident and happy."

Chen is expected to lead the medal charge in Pyeongchang, along with Japan's Shoma Uno and Spain's Javier Fernandez. There are questions around the health of defending Olympic champion Yuzuru Hanyu of Japan, who injured his ankle on a quad landing in November and missed his national championships the following month.

Chan, who was fifth at last year's world championships, missing a medal by eight points, believes a solid skate could lift him on the podium.

"I think I can definitely squeak in," Chan said. "I have that little glimmer of hope in my head of yeah, you never know what can happen, and the best I can do is give the very best and stay on my feet, and do all the planned elements that I have, and that will give me the best chance to squeak in.

"Every Olympics, we always end up having someone on the podium that we had no idea or we didn't expect them to be. So I'm hoping to be that person." 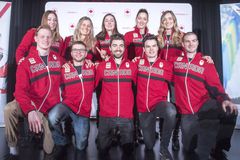 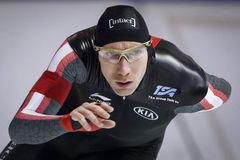