Twiggy beat the system. Monday night, as darkness fell over this city that's safe for no dog, she was getting out.

After a week on the lam at a safe house outside Sochi, a city where men with guns are hunting for stray dogs like her, Twiggy's ride north finally came in the form of a black Toyota Camry. Twiggy hopped in the front seat and instinctively lay low. She peered up at her driver with hopeful brown eyes. Cuteness had gotten her this far, and she wasn't going to change her game now.

Of course, Twiggy made it out with some human help.

"Settle down," scarlet-haired Vladislava Provotorova told her furry black sidekick. They still had a long drive to the edge of the city, after which they'd have to slip through the cement military checkpoints that have been erected to ensure the safety (for humans) of this Olympic city. But, Provotorova says, the soldiers never check the cars going out of Sochi, only those going in.

Waiting on the other side of the checkpoint, if all went according to plan, would be a BMW SUV owned by Igor Airapetyan, a Moscow resident who sides with the dogs in this struggle. Only once they were in the back of Airapetyan's vehicle, would Twiggy and the other 29 dogs. Even after that, there was still the 900-kilometre drive to Moscow ahead of them.

The five-car convoy that took Twiggy and the other dogs out of Sochi was the second one organized by Provotorova and Airapetyan, two strangers brought together by their love of animals, since the Olympic city began a campaign last year to cull the stray dogs that are seemingly everywhere in Sochi.

The 30 that got out were unquestionably lucky. Thousands of dogs have disappeared from the streets of Sochi since the municipal government awarded a private company a contract last May to "catch and dispose" of strays in the city.

The effort was escalated in January as Olympic athletes, spectators and media began to arrive in Sochi, and started posting photos online of the city's burgeoning population of wandering, owner-less dogs. The Olympics, already nagged by corruption allegations, a gay rights controversy and terrorist threats, didn't need another image problem.

But the plan the city devised – to quickly exterminate as many strays as possible – backfired, at least in public-relations terms. Basya Service, the company that won the contract, says its employees use poisoned darts so the dogs "cannot feel anything." But local residents have filmed grim videos of apparently poisoned dogs running in circles and foaming from the mouth in their last moments.

Animal rights is a foreign concept to most Russians, but a few in Sochi decided to try and save some of the city's dogs.

Provotorova says her heart sank the first time she read the announcement – posted on the side of a building – that the city would begin culling local strays. "When I read it, I felt so sad. I decided I would do what I could, and I found other people who also cared," the 31-year-old dentist explained.

First, she scooped up a friendly, ginger-furred puppy she encountered near her dental clinic in the city. She took the dog home and eventually found a family willing to adopt it. Then, she decided to get serious, forming a network with four other local women, and pooled enough money to build a ramshackle shelter on a scraggly patch of donated land outside the city.

Provotorova says they've managed to find homes for about 800 dogs, and a few cats, over the past year.

Though she agrees there were too many strays on Sochi's streets, she's furious about the government's approach to the problem. "I've read that they've already killed 5,000 to 7,000 dogs," she fumes. "We don't have any animal rights laws in Russia. We need laws about the responsibilities of [pet] owners to sterilize."

Provorotova's still-unnamed shelter is one of three in Sochi. Another is run by the municipal government (it no longer welcomes journalists, after several reported unfavourably on conditions there), while the third is partly funded by Oleg Deripaska, the billionaire oligarch who funded the construction of some of the biggest Sochi Winter Games venues, including the Olympic village and airport.

"Deripaska has a dog lover's heart, so he saw the dogs in [the construction site of] his Olympic village and decided to save them," says Nadezhda Mayboroda, the 39-year-old manager of that shelter, which has been running for a decade. She says Deripaska, believed to be Russia's richest man, has been involved for the past three weeks, paying for the construction of about 60 cages and dog houses at an outdoor shelter on a rocky hill high above the city.

While many have praised Mr. Deripaska for his civic activism – including pop singer Cher, who posted on Facebook that her "amazingly compassionate Russian friend Oleg [was] saving dogs in Sochi" – Ms. Mayboroda hints that the oligarch's contribution is only fixing part of a problem his construction business helped to create.

Which made Sochi what it is now, a city where hunters hunt and dogs flee. Even for the lucky ones who make it to Moscow, there's still the challenge of finding a family willing to host them.

That won't be a problem for Twiggy, though. Her emoting brown eyes were already spotted on Facebook by a Moscow family. Soon, someone new will be telling her to "settle down." And this time, she just might. 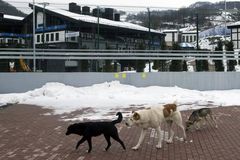