Stéphanie Durocher concentrates stone-faced for a long while, then generates a few slow bounces on an oversized trampoline and propels herself into a high back flip.

She looks over to Luc Belhumeur for feedback. He knows a few things about aerial movement, having coached Olympic champion freestyle skier, Alexandre Bilodeau. Now he's teaching Durocher about flipping and twisting, but she won't be landing on skis in powdery snow.

She is the flier on Canada's synchronized swim team, the one projected into tricks through the air. The sport may appear graceful from poolside – serene and feminine, but a closer look shows a dizzying test of skill, strength and flexibility. The Canadian women are working six days a week at the Montreal Olympic Pool on secretive routines. They have enlisted help from Cirque du Soleil along with experts in the biomechanics of acrobatics, planning to astound with extraordinary highlights at the 2012 Olympics in London.

The Canadian team has been carefully guarding its Olympic routines from the competition, not allowing cameras to capture its Olympic moves. It has just recently released some details about themes and music, saying its team free routine will have a circus theme and be performed in colourful sequined bathing suits to a medley of music from Cirque du Soleil shows. The Montreal-based entertainment group even had a few of its experts help the team polish the movements.

"What is so risky at the Olympic Games is we are coming with completely new moves, just created, and never seen before," head coach Julie Sauvé said. "Last year we came with new moves, and then everybody copied them. So we cannot come back with those – we have to be even bigger and better."

Thanks to new funding help from Own The Podium and B2ten, and a sponsorship deal with skin care company Epiderma, the synchro team can afford specialized training with experts such as Belhumeur and Mickael Begon, an assistant professor of biomechanics from Université de Montréal.

Although 23-year-old Durocher has been a flier for several years, Belhumeur is rebuilding the first-time Olympian's skills from scratch.

"We work on the trampoline to build her confidence and build her as an acrobat, because these girls are not acrobats, but swimmers who have learned a little acrobatics from a synchronized swimming coach," Belhumeur said. "She's not creating enough flip yet with her feet and hips. When her lower body works better, she'll soon have higher tricks, even more of a wow."

After her acrobatics session, Durocher rejoins her teammates in the water and Belhumeur films the practice as the others shoot her into somersaults from different underwater formations.

"I do have a lot of pressure as the flier, but I like it," Durocher of Repentigny, Que., said. "Like Luc tells me, 'Attack.' I can't think about it too much, I just go with it. I'm not scared, I'm just excited. When you're on top, you're the star, and I like that."

Periodically, the swimmers sit shoulder to shoulder on the pool deck with identical black bathing suits and white maple-leafed swim caps, huddled before a TV screen, studying video. They discuss corrections and slip back into the water.

Begon, the biomechanics professor, watches training and analyzes video shot from above and below the water. Published research on the biomechanics of synchronized swimming acrobatics doesn't exist, so Begon draws on his research in gymnastics.

He advises them on movement in the air and the most efficient underwater pyramids. Seven athletes swim into position and act as pumps and springs, often forming platforms with interlocked arms and hands to launch the flier – sometimes multiple fliers from multiple pyramids.

But here is the remarkable challenge: They must do it all without touching the pool's bottom to push off. Acceleration comes from sculling arms and legs pumping in an egg-beater motion. With perfect unison vital, the swimmers time movements to an eight-count piece of music booming from underwater speakers.

Knowing how to achieve these skills is one thing, but building the powerful and aesthetically-striking bodies to execute them with artistry requires the help of more experts. Their regimen also includes speed swimming, ballet, Pilates and strength and conditioning.

They huddle in a corner of the pool deck for a quick meal break. They've been at it since 6 a.m., and lunch comes early at 10:30 a.m. A team nutritionist helps them decide what and when to eat. Easily-accessible, easily-digestible, high-quality foods fuel an intense training day while maintaining that fit synchro figure.

"These athletes spend so much time in the water and swimming upside down, that it's challenging to make sure they are not upsetting the stomach," said nutritionist Catherine Naulleau, who advises the women not to eat peppers, onions, tomatoes or bananas before pool training, but urges almonds, Greek yogurt or sandwiches with lean meat.

"It's so important that they get enough protein and carbs at meal breaks to fuel their training and recovery. If it's not right, their afternoon training will suffer."

A long strength training session includes extensive work with kettle bells, heavy barbells and elastic bands. The women do taxing abdominal sets using an exercise ball and some with a fitness wheel. They take turns doing high sweeping leg lifts into the air, clearing a stack of chest-high risers while wearing a heavy ankle weight and still have enough energy to bike and run.

"I have to put power into their techniques: the egg-beater movement, sculling, lifting with the shoulders, ballet leg. Those things have to be improved with strength on dry land first," strength and conditioning coach André Kulesza said. "We lift very heavy weights so it is even more difficult than what they need to do in the water."

They require exceptional core strength, powerful arms and shoulders, and strong yet slim and elegant legs. A high capacity for transporting oxygen to the body is also needed for the four-minute routine. They must also train to hold their breath for up to 60 seconds at a time.

"On top of having your muscles burn and your heart-rate race, you are also lacking oxygen in the pool, so your muscles are feeling the burn even faster," said Élise Marcotte, one of three holdovers from the 2008 Olympic team. "Imagine doing a four-minute bike sprint while holding your breath in 15-second intervals. And we have to do it all with a smile."

China, Ukraine and Spain are top contenders, as is Russia, winner of all team and duet Olympic gold medals since 2000. Canada's last Olympic medal in the sport was a team bronze at the 2000 Sydney Games, falling shy in 2008 with a fourth-place showing in Beijing. But the Canadians took gold in team and duet events at the 2011 Pan American Games, grabbing attention for athleticism through the air.

"It's going to feel amazing to finally show off to people what we've been working on," Marcotte said. "We're trying to push the limits, and we want the judges to say, 'Wow.' The crowd is going to love it."

"Third in a 10 part series on the Science of Sport"

A day at the pool with Canada's women's synchro swim team
Gallery
June 1, 2012 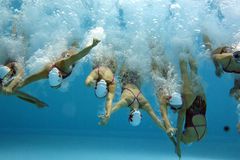