Among the wide-ranging package of reforms approved by the International Olympic Committee is one that could radically change the face of the amateur sporting world.

The IOC voted on Monday in favour of a more flexible sports program that scraps the limit of 28 sports at the Summer Games to move to an "events-based" system that would allow new competitions as long as there are about 10,500 athletes and 310 medal events over all. (The Winter Games has fewer competitors and events.)

The move could see baseball and softball added to the schedule for the 2020 Tokyo Games while dropping less-than-popular events, such as modern pentathlon.

"There will be considerable debate and tension because the Olympics cannot accommodate all of the sports and all of the events that want to be on the program," said Bruce Kidd, a University of Toronto Olympic historian and member of the Canadian Olympic Committee.

The IOC also approved allowing host cities to propose the inclusion of one or more additional events for their Games.

IOC president Thomas Bach pushed the 40-point reform package – the organization's biggest changes in decades – after several potential host cities were scared off by the costs of hosting the Olympics. The new rules also make the bidding process for host countries more affordable, add sexual orientation to the non-discrimination policy and create an Olympic television channel. As well, Olympic hosts will be allowed to hold events outside the host city or even country, opening the door to joint bids.

"This is big news for an organization that has been very much in control of its own destiny in the past and has been very reticent to change," said Kevin Wamsley, an Olympic historian and former director of the International Centre for Olympic Studies at Western University.

In addition to baseball and softball, the IOC's move to allow new sports could also see squash and karate join the Olympic roster – a move that Prof. Kidd says bestows instant credibility, visibility and revenues.

However, in order to make room for newcomers, existing Summer Games events will have to be axed to ensure that there are not more than 10,500 athletes.

Here are some events that observers say could be dropped:

The little-known sport consists of five events: pistol shooting, fencing, swimming, horse riding and running. Comparatively few athletes participate in the sport, which demands a range of training venues. Critics believe the only reason it is still an Olympic event is that it was introduced by Baron Pierre de Coubertin, the Frenchman who helped revive the modern Games.

Canadian IOC member Dick Pound, a former Olympic swimmer, was quick to mention synchronized swimming when asked by a reporter what sports the Olympics could do without. For his part, swimming federation president Julio Maglione acknowledged that the new rules present "a difficult moment" for the sport. "I suppose that it's a problem we discuss in the future. We don't know what's going to happen with us, athletics, gymnastics."

Often ridiculed, critics question why synchronized swimming is an Olympic sport, given that it is judged on artistic merits. However, it is extremely popular in some countries.

As with synchronized swimming, some Olympic observers deride the inclusion of rhythmic gymnastics in the Games. The popular event, which is also judged, raises questions, given its reliance on props, including ribbons, hoops and balls.

Mr. Pound also fingered triple jump, saying: "Everybody has to share the load for the good of the Olympics." Double Olympic gold medalist Sebastian Coe rejected the suggestion, saying the event is a "sacrosanct sport" in track and field.

However, Mr. Coe, who is campaigning to become president of world athletics' governing body, said he wasn't surprised track and field was top of mind. "We have 47 different disciplines so it is inevitable."

The unusual sport, which requires athletes to stay in contact with the ground at all times, has its share of critics, who question how it fulfills the Olympic motto of "Higher, faster, stronger." Mr. Coe also defended race walking, calling it "a very important part of our sport."

Some Olympics watchers question the value of equestrian events, given the reliance on horses coupled with the high cost of competition. Critics especially argue that dressage, the ballet-like event seen as being more about skill than athletic ability, should be excluded from the Games.

With reports from Associated Press and Reuters. 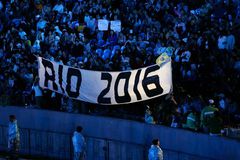 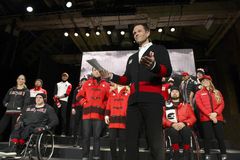