They are doing The Bolt across the entire front of Puma's store on Carnaby Street in Soho, giant images of everyday Britons pointing to the sky in the manner of the man whose image was writ large across the 2008 Beijing Olympics.

Usain Bolt is back for the 2012 London Olympics, and just in time. These are games in need of some transcendence, and with Jamaican Independence Day celebrated for the 50th time on Monday, it is damned sporting of Bolt to have brought a foil, too, in the form of Yohan Blake.

Far away from the Olympic Park, there has been a strange convergence at work in this Olympic city. Since the start of these games, a parade of famous and familiar reggae and ska artists have come through London for concerts timed to coincide with Monday's celebrations. Lee 'Scratch' Perry, Damian 'Jr. Gong' Marley, Jimmy Cliff and Toots and the Maytalls, among others, have been in the city. Jamaica's sprinters are rock stars in this city, and make no mistake: they will be the second home team, especially since their competition will be the U.S., and everybody likes to hold it over the Americans.

So call it 'Fasta, Rasta.' Bolt and Blake are training partners but they are as different in personality as they are in physique. Bolt is the very personification of Jamaica's 'no problem,' while Blake is nicknamed 'The Beast' because of his training regimen. Bolt is tall and lean, Blake all muscles and freakishly long arms. Bolt is Puma; Blake is Adidas.

You've heard of Battle of the Bands? When the men's 100 metres qualifying heats begin Saturday morning, leading to Sunday afternoon's final, and when the 200 metres event takes over midweek, it will be Battle of the Brands. Bolt reportedly makes $9-million per year in a sponsorship deal with Puma that ends in 2013.

On Thursday, Adidas announced a second-quarter net profit of $201-million (U.S.) an 18 per-cent increase from last year's. Sales increased 15 per cent, and the company that forked over $100-million to the IOC to become the official sponsors of the Olympics reported that it made back its investment in the past 12 to 18 months on licensed product sales alone. Full-year profit growth will be between 15 per cent to 17 per cent, up from five per cent from earlier estimates. In addition to the Olympics, Adidas was one of the official sponsors of Euro 2012, outfitting six teams including Spain.

Nike, on the other hand, experienced a profit drop. And just two weeks ago, Puma reported a 29 per-cent decrease in second-quarter net earnings, and announced it was gutting its lifestyle clothing division and terminating some sponsorship deals. Puma is more heavily exposed to the European market than Nike or Adidas, the two giants of the athletic shoe industry, and the company sent out its trading update a week early to say that growth in Europe has, effectively, stopped. Puma has just one major sponsorship agreement: all its eggs are in Bolt's basket.

But how much of a kick can a company get from the Olympics?

"Short-term, I'm not certain," said John A. Davis, an instructor at the University of Oregon School of Business and author of The Olympic Games Effect: How Sports Marketing Builds Strong Brands.

"I think people look at the Olympics as being 17 days in which you can get your brand out there. But most people watching the Olympics are passive about the brands. They're more interested in the athletes. In fact, too much advertising might turn them off.

"The thing is, Puma doesn't have a lot of horses in the sponsorship race," said Davis. "It's unrealistic to think that you'd see a reversal in your last quarter just because Bolt wins a medal, but it might allow you to make an argument that you're still valid and comparable."

Usain Bolt, 25, Jamaica: Bolt will be hard-pressed to become the first man to win consecutive 100 and 200 metre gold medals, in part because his chief competitor – Yohan Blake – is considered a better finisher over a longer distance. Bolt hasn't been the same runner since being disqualified in the world championships in Daegu, South Korea in 2011, and with the one false start disqualification rule in effect in the Olympics, his tailor-made explosion from the blocks is mitigated. In May at a Diamond League meet, Bolt turned in a shockingly slow time of over 10 seconds. Since Beijing, he's seen a variety of specialists for nagging medical issues.

IN HIS OWN WORDS: "It's always good to lose. It wakes you up."

Yohan Blake, 22, Jamaica: He's been on the sprint radar screen for a while – Canada's Donovan Bailey had him pegged two years ago – and Blake laid down a marker when in the space of three days he beat Bolt in the 100 and 200 metres at the Jamaican Olympic trials, by 11 one-hundredths of a second and three-hundredths of a second, respectively.

Asafa Powell, 29, Jamaica: Trick question? Who has run the most sub-10 second times in sprint history? Answer: Powell, who has laboured in Bolt's shadow and now must share space with Blake. He's twice held the world's record at 9.77 and 9.74 – again, pre-Bolt. Powell made news on the eve of the qualifying heats in London when he and his coach complained he was woken from his sleep for a drug test Thursday night, the third time in five days that blood has been drawn from the sprinter, a total of seven vials.

IN HIS OWN WORDS: "I'm pumped up. I'm not getting any younger, so it's probably my last one."

Tyson Gay, 29, USA: The world champion in 2007 briefly held the world's record before Bolt's emergence, and was best remembered in the 2008 Beijing Olympics for dropping the baton in the men's 4 x 100 metres relay. Plagued by groin issues, he finished second in the U.S. trials in 9.86 seconds.

IN HIS OWN WORDS: "There would still be pressure if I did get a medal in 2008, but it's a lot more now because I really feel the missing piece of my heart is an Olympic medal."

IN HIS OWN WORDS: "I am not focusing on just trying to get a medal, I am going out there trying to win. If I take that lead, it is going to be hell giving it back." 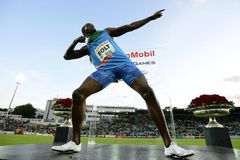 London’s Olympic Stadium charged with excitement for track and field
August 3, 2012
Follow us on Twitter @globe_sports Opens in a new window
Report an error Editorial code of conduct
Due to technical reasons, we have temporarily removed commenting from our articles. We hope to have this fixed soon. Thank you for your patience. If you are looking to give feedback on our new site, please send it along to feedback@globeandmail.com. If you want to write a letter to the editor, please forward to letters@globeandmail.com.
Comments