It was the sort of predictable rout many expected since the opening day of the 2014 Sochi Winter Olympics men's hockey tournament – Canada rolling over Austria by a 6-0 score to set up a meeting with Finland on Sunday for top spot in Group B.

Mostly, what Canada wanted to see in the past 48 hours was progress – moving from a collection of individuals to a cohesive team – and there were lots of good signs on display.

"I think we feel better as a team," said centre Ryan Getzlaf, who put a punctuation mark on the win over the Austrians with a highlight-reel shorthanded goal. "We've been to a lot of these events, and we know it's a progression throughout this whole thing. That's the biggest emphasis that we have to focus on – to get better as the tournament goes on.

"The little mistakes that we make here and there, we've got to minimize those so our goalie doesn't have to come up with some of those saves."

With all due respect to the Austrians and last Thursday's opponent, Norway, the Finns (2-0) pose far more of a threat to Canada (2-0).

"They've got a great team, a lot of NHLers, a lot of veteran guys. They play hard, too. Even from when I was younger, they're a tough team to play against every time," said defenceman Drew Doughty, of the Finns.

"At the same time, no matter who we face, we're going to have the same confidence and the same swagger. We're looking forward to it. We used these last two games, obviously, to get the wins, but at the [same] time, to get used to our linemates and [blueline] partners and now we're ready to go."

Against the Finns, who've scored 14 goals in two games, they may need to be.

Just about everything that could go right did for the Canadians at the Bolshoi Ice Palace, where they tap-danced around and through the Austrian team almost at will for 40 minutes, before letting up.

As is his pattern, Canada head coach Mike Babcock switched around three of his four lines, trying to find chemistry. In the second period, he found a unit that worked: Jonathan Toews centring Jeff Carter and Patrick Marleau. Carter scored a natural hat trick, turning a two-goal lead into a five-goal lead.

Carter began the tournament on centre Sidney Crosby's line, but acknowledged he didn't have a great first game against Norway. It was mostly Martin St. Louis who played there Friday, and while Crosby managed just a single assist and has yet to score, he's had his share of chances.

"I'm not worried about him too much, to tell you the truth," Babcock said of the NHL superstar. "We've got to get the lines to go the best way they can. We have an off-day [Saturday] and that means coaches are not allowed to talk to players … besides saying, 'Hi.' We'll recharge and get back at 'er here."

The line of Carter-Marleau-Toews had a dominating second period, Carter sharp around the net when he had to be. He is an opportunist, and when he gets on a roll, his confidence soars.

"It's funny how it happens," Marleau said. "These are guys I see and play against all the time. A little talk doesn't hurt either. Obviously, when you talk out there, it eases everything. You're not worried about where guys are. Faceoff plays, talking before faceoffs, all those little things help."

Matt Duchene and P.K. Subban got into the lineup Friday in place of Patrick Sharp and Dan Hamhuis, and Thursday's starter, Carey Price, got the night off, with Mike Smith dressing as Roberto Luongo's backup. All three are expected back in against Finland.

Luongo stopped 23 shots for the shutout.

According to Babcock, one of the hardest parts of his job is telling which three players will be the extras on any given night. 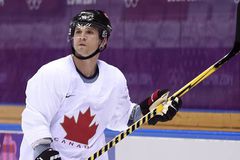 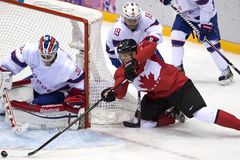 Slow start, but a solid finish for Team Canada against Norway
February 14, 2014 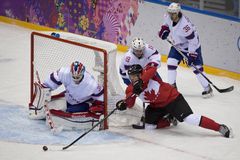 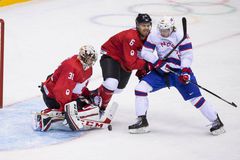 Duhatschek: Team Canada will keep its foot on the gas vs. Norway
February 12, 2014 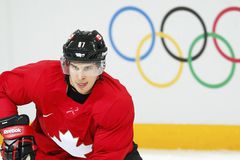 The many quirky differences between NHL and Olympic hockey
February 12, 2014 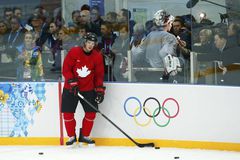