Two hours a session. Five rounds in total. One hundred and 25 clay birds flung and most blown to bits. This is Susan Nattrass at home on the range; just your typical 61-year-old pioneer, advocate, medical researcher, sporting legend doing what comes naturally.

Only the seven-time world champion is not quite sure what she's doing will be enough to qualify her for a seventh Olympics.

To date, the Shooting Federation of Canada has qualified just two of its members for the 2012 London Summer Games: Cory Niefer in men's air rifle, Dorothy Ludwig in women's air pistol.

Three women (Cynthia Meyer, Lindsay Boddez and Nattrass) are in the hunt for the women's trap event and the SFC has asked for a quota spot from the International Shooting Sport Federation. (The ISSF is determining how many shooters in each event will compete in London.)

If Canada is given a spot, there may need to be a shoot-off with the winner getting an Olympic berth. It's not the ideal way to do things, but having been down this route before Nattrass is taking an even-handed approach.

Nattrass has been synonymous with competitive shooting in Canada for decades. She was the first women to compete in shooting at an Olympics (Montreal in 1976). She qualified as one of the best shooters in the country. Women didn't have their own Olympic shooting events until 1984. (At those Los Angeles Games, Linda Thom won gold for Canada in the 25-metre pistol.)

Nattrass fought to have separate events, then fought to ensure women's trap and skeet shooting remained in the Olympics.

On top of that, the Medicine Hat-born Nattrass has taught other women how to shoot, received the Order of Canada for her well-aimed achievements and operates the Puget Sound Osteoporosis Center in Seattle, where she researches the effects of aging in the bones of active women over 40.

It's enough to keep energetic Nattrass on the go as her body returns to form.

Last year, she was occupying the third car in a five-car pileup on Vancouver's Lions Gate Bridge. The accident injured her neck. She also had a fall off a ladder that aggravated her lower back. A magnetic resonance imaging exam revealed she had fractured her sacral vertebrae.

"This January, I went to Cyprus and I had to change the height of my stock [on her shotgun]" Nattrass said during lunch on a rainy afternoon on the West Coast. She was lively and good spirited and wearing a special brace for her back.

"I shot five days there and I actually hit targets. There wasn't a speck of pain. My new is my old. I'm back to being straighter than I was before."

Nattrass's love for shooting was honed by her father, Floyd, who competed for Canada at the 1964 Tokyo Olympics. As kids, she and her two brothers were driven across Canada and throughout the United States in search of trap-shooting events. Dad competed; mom, Marie, served as coach. Even now, at 91, Marie Nattrass will come to Vancouver Gun Club in Richmond, B.C., sit in her daughter's vehicle and correct what Susan is doing wrong.

"The other day after my second round, I wasn't shooting very well," Susan Nattrass said. "Mom said I was shooting under [the targets] So I put another one-millimetre spacer in my stock and shot 23 of 25 in the next round."

After all these years, Nattrass has last none of her passion for trap shooting. (Trap allows shooters to have the gun shouldered when they call for the targets that fly off at different angles and heights at a speed of 105 kilometres an hour. In skeet shooting, the gun is down, the targets fly on a delayed basis but their trajectory is fixed.)

She speaks openly about the good and bad of the six Olympics she's attended, specifically Barcelona, where she was stopped and threatened by an armed guard trying to enter the Athletes' Village one night. Her response? "Shoot me." Thankfully, the guard declined.

"Susan is an icon in shooting sport," SFC president Asmir Arifovic said. "As is with any sport at the high-performance level, only with dedication and perseverance can an individual stay on top of their field for many years. We have used the wealth of Susan's international experience and years in sport to help us bring up new athletes to an international level of performance."

If you ask Nattrass what she's most proud of accomplishing as a shooter, you won't hear about clay birds blasted or championships won – although she does joke about her shotgun, a prize from the 1977 world championships, being older than most of her competitors.

What you get instead are tales of how her sport has grown, how women have earned their spot in Olympic shooting and how people react when they ask what she does and why she does it. It's about acceptance and fighting for what's right within her sport.

"It's more natural for men to shoot. It's just how kids are raised – boys play with trucks and guns, girls don't," she explained. "The greatest joy I get is going to the worlds and seeing 80 women from 30, 40 countries – and there are so many full-time shooters. Never in my life did I think I could be a full-time shooter.

"I went to Qatar in 2007 to teach women how to shoot. When I was there, the Russian team was there. The Czech team was there. The Slovenians were coming," she added. "It's so cool that there are all these opportunities for women to do the sport. It feels … good."

The whole shooting match: A visit to the Vancouver Gun Club Gallery
April 30, 2018 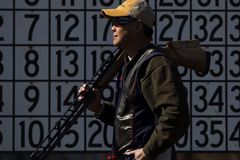 Watch: Meet the Canadian athletes competing at this year's summer Olympics
June 5, 2017
Follow Allan Maki on Twitter @AllanMaki
Report an error Editorial code of conduct
Due to technical reasons, we have temporarily removed commenting from our articles. We hope to have this fixed soon. Thank you for your patience. If you are looking to give feedback on our new site, please send it along to feedback@globeandmail.com. If you want to write a letter to the editor, please forward to letters@globeandmail.com.
Comments