She was the Olympic weightlifter who missed out on a medal by the weight of a chihuahua. Three kilograms was the official count. The weight of one clay brick. Or Donald Trump's hair. Almost nothing, she said.

Yet those three kilograms could have crushed Christine Girard and left her unwilling to lift anything heavier than a morning cup of coffee. Instead, this is how it is now: The goal is the podium at London's 2012 Olympics and, to reach it, Girard has reframed the past as she works out in a weight room that doubles as the garage of her suburban Vancouver home.

In the morning, every morning, she warms up and lifts weights. In the afternoon, she lifts again, concentrating on various muscle groups, technique, explosiveness, on pushing herself to the brink of exhaustion. At night, it's stretching and ice baths, then planning the next workout. All this to make up for Beijing and those three missing kilograms.

"The day after my competition I was completely destroyed," the 27-year-old Girard says without hesitation. "Then I realized I did everything I could. I did a lot right. That's what kept me going. It's being able to see the good in things."

What's evident in Girard is a goodly amount of perseverance. At times she has trained alone, trained in barns, changed coaches, switched provinces, to B.C. from Quebec, and changed coaches some more. Her move west was precipitated by her marriage to B.C.-born Walter Bailey, a former competitive weightlifter who works for the RCMP.

On the plus side, Girard gained a husband, companion and training coach. What she lost was a considerable amount of funding. In Quebec, the provincial government well supports its athletes; in B.C., not as much. The difference – $15,000 – was a significant shortfall. It led to several coaching changes.

"Being a coach in Canada is a volunteer job, they're not paid," said Girard, who was born in Northern Ontario but grew up in Rouyn-Noranda, Que., with sisters who first got involved in weightlifting. "It's hard to find someone who can give as much at our level. The job requires a lot. I had a coach who asked for a lot of money."

Her current set-up isn't perfect but, again, it's about making things as good as possible. Guy Marineau is Girard's competition coach; he's based in Montreal. The two will see each other at the 2012 Canadian weightlifting championships in La Prairie, Que., this weekend and plot strategy face to face instead of over the phone or by computer.

Bailey will also be at the nationals and talk with Marineau, updating him on Girard's preparation. The hope is that Bailey, while not a certified competition coach, will receive a day pass at the Olympics so he can be with his wife in the warm-up area before her lifts.

"If I can get in the warm-up area, that's where a lot of the competition goes on," said Bailey, who competed at the nationals and junior nationals when he first met Girard seven years ago. "You get to see everyone else getting ready. I'm good at reading her reaction if she has a lift and it's not perfect. I can calm her down if she gets excited.

"Guy can really keep track of the mechanical stuff. I can do the human side."

Girard's human side was put through a wringer in Beijing. After raising 228 kilograms in combined weight and coming three kilograms short, she had a reporter ask if she lacked the courage to win the bronze. Girard took that to heart and began questioning her character. The exercise helped her recount what she had accomplished: She had entered the Olympics as the seventh best lifter in the women's 69-kilogram class and exited as the fourth. She had produced on the day.

"Beijing was her first Olympic experience," her husband said. "She wanted to do well. Winning a medal was more of a hope. Now she can say, 'I know I'm at that level with the best of the best.' It solidified her confidence."

And with a bulked-up faith, it's onward and upward for Girard. Three kilograms. It was almost nothing; it has pretty much been everything. 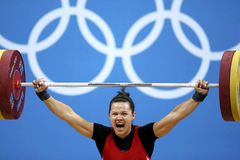 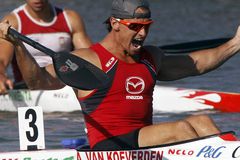