On the third night of the Summer Games, my kids came bursting in the door of our house in Rio. They had been at a stadium in the outer reaches of the city with their father, to watch the finals in the women's Olympic Rugby Sevens tournament. "Mom, mom, Canada won a medal, we won, we got the bronze," my daughter, Lizalou, 6, said all in one squashed-up, breathless sentence. "And I got to see Jen Kish!"

As I settled in to hear the blow-by-blow of the match, I had a moment of silent gratitude. Whatever the legacy of these Olympics turns out to be for Rio, the experience of watching women of all nationalities and sizes achieve extraordinary feats has given my children new ways to think about gender and sports and what it means to be strong.

When Lizalou was born, we lived in India, and when she was 3, we moved to Rio. She spent a year at an Indian preschool, and when we got here, we enrolled her at a Brazilian school. There were lovely aspects to both of these educational experiences – we joined her class to make little clay diya, or lamps, for Diwali in Delhi, and we dressed up for a family Carnaval party in Rio. But our life overseas also meant that our children were exposed to ideas about gender, and how boys and girls are different, that we would not have chosen for them. And one of the most difficult things for my partner, Meril, and I has been the way Brazil treats girl and sports.

My daughter's friends who are boys all play soccer. The ones who are girls take ballet, gymnastics and cheerleading. Not one girl is on a soccer team, or in a beach volleyball league. At school recess each day, the boys play soccer and the girls … do each other's hair. The school held a track-and-field day in honour of the Olympics, and Lizalou racked up a staggering series of long-jump results. But there is no athletics program at the school. Just soccer. And girls don't play. It's not an explicit rule, but it doesn't have to be: All the kids know, and nothing would persuade Lizalou that she should venture on to the turf at lunchtime.

The schoolyard dynamic is a reflection of the larger one in Brazil. Soccer is the national obsession, and it is soccer played by men. The national women's team is one of the best in the world, but it struggles for funding and its games are never broadcast. Back in 2015, when the team's captain, Marta da Silva, scored a goal that made her the highest-scoring player in World Cup history, the news did not make the newspapers in Brazil. There was, however, front-page coverage of a friendly match played between the men's team and Honduras.

When we moved here, my soccer-mad son wanted to play in a league and we thought we would enroll both kids – but we could find only classes for boys. Finally, after our first year here, we got together with a few other expatriate parents and hired a private teacher so that our daughters could be in a co-ed football class, on the beach after school. The sight of little girls playing soccer made some Brazilians stop and stare. But after a couple of weeks, the class devolved into the boys dribbling and the girls making sandcastles. No one, not the affable teacher, not the kids, seemed able to imagine themselves into a different reality.

There is an exuberant cult of fitness in Rio that includes both men and women: The beach in the morning is full of people running, doing push-ups, shadowboxing. But the women work out in colour-co-ordinated outfits and lipstick, their long hair swinging. And the obsession with appearance starts early. When some of my daughter's five- and six-year-old Brazilian friends come for play dates, they bring a toiletries kit, so that they can be perfectly coiffed when they leave. They wear makeup to birthday parties. I love to see Lizalou run and I relish how fast she is; she wants high heels, like the ones her friends sometimes wear, shoes that paralyze them into immobility.

Then came the Olympics. One of the surprises of these Games was the poor performance, early on, of Brazil's men's soccer team and how that sent dispirited fans into an eleventh hour embrace of the women's side. In their game, Brazilians found the football they missed – the elegant, sly game of dribbling and feints – and they belatedly embraced them, five days into the Games. (Of course, there was no small element of implied "You play like a girl" derision in this, too, as they chanted that Marta was better than the men's captain, Neymar.)

My children were in the stands to see Marta play, twice, in the Olympics. They saw women long-jump and sprint and pole vault. They saw women be celebrated because they were fast and they were strong. They were awe-struck, in particular, by Jen Kish, the captain of Canada's rugby team: As I was prepping to cover the team, they watched videos of past games over my shoulder, fascinated by clips of Kish weaving through and over a line of defenders to slam the ball down on the try line.

At the postmedal press conference, I asked Kish and her teammates what they thought it might mean, that the first medals for Canadian women at the Games weren't for sports that women do dressed in glittery outfits, but sports where they tackle their opponents and rip a ball from their arms. "I'm not the most feminine-looking person," Kish said with an arch raise of an eyebrow. "But I'm proud of who I am and what I've become and I think rugby has helped build that character."

Her colleague Karen Paquin chimed in. "I think it's really important that we put that image out there – that it is very cool to be strong, that it is cool to be fierce," she said. "I was never the little pretty girl, I was not good at gymnastics, I was not gracious at all. But when I went on the field of rugby, it all made sense."

Near the end of the Games, another team of tough Canadian women won the soccer bronze, defeating Marta and her team. Afterward, I showed my children a video clip from the postgame interview with Marta. Near the end, the legendary player choked up and turned to address the camera directly.

"We managed to fill the stadiums – I think that was the biggest prize for us," she said. "Of course we wanted to climb on the podium. But the recognition, to be cheered in every place that we went, that's what we're going to take with us. Think about this, Brazilians – don't stop supporting women's football. Don't stop. We really need you." Overcome, she turned away. It made my kids teary, too.

Marta, I think, expects that the women's football team will quickly be relegated back to obscurity, especially now that the men's team has redeemed itself and won the long-coveted gold medal.

But maybe, after these two weeks of seeing women play soccer on prime time, more little girls will ask about lessons; maybe a few will break the unspoken rule and run on to the field at recess.

On the last day of the Games, Lizalou ran upstairs to get dressed in the morning and ran back down a few minutes later. She had bypassed her usual favourites – ruffled skirts and sundresses – and put together a new outfit: athletic shorts and an old South Africa football jersey that used to be her older brother's.

Rio in the rear view: The Globe’s Olympics team recounts its most memorable moments ​
August 21, 2016 Women's team could be new heroes for Brazilian soccer
August 8, 2016 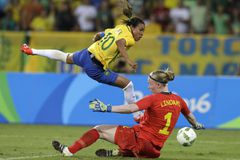 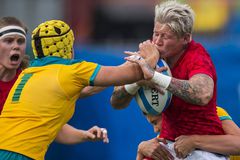