Now he's not just a legend.

"I am the greatest, ever," Usain Bolt said.

It's hard to argue. Double gold medals in the 100 metres and 200 metres in two consecutive Olympics. World records in both events. A personality that transcends track.

"I am a living legend," he said Thursday. So much so he put himself in league with Muhammad Ali and Michael Jordan. "I've done something no one has ever done before ... so for me I would say I am the greatest." When asked specifically about Ali and Jordan, Bolt said: "I'm guessing that, yeah, I am in that category."

Bolt made his mark Thursday on a perfect night in London on a track he knew was fast. He won the 200 in a time of 19.32, slowing down near the finish because his back was tightening. Right behind him for the ride were countrymen, and training partners, Yohan Blake and Warren Weir, who won silver and bronze in 19.44 and 19.84. He won the 100 metres four days ago in 9.63, the second fastest time in history.

All that's left to accomplish now for the decorated Jamaican sprinter is another gold medal in the 4x100 relay on the weekend, which would give him six golds in his two Olympic appearances.

He had no doubts about the 200m. So relaxed before the race he joked with a volunteer. "Are you nervous?" he asked her. "Yes. I am so excited," she replied.

"A lot of people doubted me but in my mind there wasn't any doubt, after the 100m I was really confident in myself, it wasn't a problem," he said. "They can stop talking now because I am a legend."

The race was yet another dominant display by Bolt, as he was way out in front coming off the turn and posted his season best time right when he needed it most.

There was intrigue coming in, too, as the youngster Blake had bested his mentor at their national trials at both distances and appeared to be improving every year.

Come the Olympics, however, Bolt said he was confident he could defend the two titles against his new challenger and become "a legend" of his sport.

What happens next isn't clear. Bolt struggled at times this year and had back problems, which flared up Thursday. He said getting beaten by Blake was a wake-up call. He also didn't show the same dominance in London that he displayed in Beijing, where he slowed down markedly and still shattered the 100 and 200 records. In London he won, but no records.

On Thursday, he said he would take some time and assess his future. He needs a new goal, something to work toward. And trying to repeat in 2016 in Rio de Janeiro is unlikely. He'll be 30-years old while Blake and Weir will both be 26 years old. "I think I've had my time," he said. He might try the long jump, but not the 400. "Hell, no," he said when asked about trying that event.

Bolt took time to take a shot at critics, including multiple gold medalist Carl Lewis, who have questioned the Jamaican sprinters' performances, raising the spectre of drugs. Bolt insisted the team is clean and said commentators like Lewis are just trying to get attention long after they have been forgotten. "Who are these guys who sit and talk, especially Lewis?" he said. "Nobody really remembers who he is. ... For someone to just say that without any proof or anything is really annoying for the athletes, because we work hard, we push ourselves to the limits." 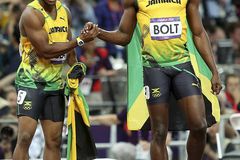