Right before ice dancers Tessa Virtue and Scott Moir were about to begin Sunday, Moir looked up into the crowd in Sochi and winked at someone. The Olympic audience roared its approval.

Standing at centre ice, with pressure mounting and seconds to go until one of the most important performances of his life, who was Moir winking at? Turns out it was a bunch of people he's never even met.

"There was people waving at me. I thought that was kind of funny," Moir said later. "They were just happy I was looking in that direction, and they thought I was going to wave back I think, so I had to give them a wink or something."

Strange things, for example, like Virtue and Moir executing their best short program of the season Sunday, only to come up short in the judges eyes, for reasons no one could readily explain.

Virtue and Moir, the defending gold medalists from Vancouver are in second place after the first day of the two-day competition, with a score of 76.33. Americans Meryl Davis and Charlie White, silver medalists in 2010 and the defending world champions, sit in first place with 78.89 points.

The most tangible difference between their two performances appeared to be a small bobble by Virtue and Moir in their Finnstep segment, a quick ballroom-dance type sequence that lasts about 30 seconds, which ice dancers are required to do. The judges moved them down a level and docked them a point.

But other than that, even their coach Marena Zueva – a Russian choreographer who coaches both teams in Canton, Mich. – couldn't pinpoint what made Davis and White that much better.

"They [the judges] sit in a different spot, and they have zoom [lenses], they can review," she said. "This dance, it's very fast. The normal eye can't catch it sometimes… That's why I will probably never be a judge. For me, I can't say."

Zueva agreed it was the best short program she's seen the Canadians skate this season. But she also said the Americans turned in their best one as well.

"Tessa and Scott's dance was absolutely great from beginning to the end. I smiled all [through the] dance," Zueva said.

The judging in the ice dance is being watched closely after French sports magazine L'Equipe floated a rumour last week of a fix arranged between the Russian and U.S. judges that would result in Davis and White being marked favourably for the gold.

There is no conclusive evidence, only a 2.56-point margin that Virtue and Moir now have to make up in the long program on Monday.

The gap is both small and significant. The long program, or free skate, contains more elements and therefore more points are up for grabs. But even a few points can be a lot whenever the world's two best ice dance teams clash. And with Davis and White coming into Sochi having posted higher scores on the international circuit this season, the Americans are on a roll.

However, Moir said he and Virtue are up to the challenge.

"Yeah we feel like we can make it up. There's a lot more elements in the free program so it's doable," Moir said. "We just can't wait to get out there."

The Canadians were happy to have ironed out some wrinkles from the same short program they skated in last week's team figure skating event, where Canada won silver.

"That was more like it," Moir said after Sunday's performance. "That's the skate that we've been having in practice. To do that on this stage felt pretty good."

Moir said he couldn't wait to get on the ice, and that the six-day layover between skating the short program in the team event and Sunday night had been wearing on him.

"To be honest, I've been twiddling my thumbs. I didn't think six days could last any longer than they did," Moir said. "This morning I woke up with a big smile on my face."

Despite being in second place, Virtue said she was pleased with their performance.

"It was special," Virtue said. "We got off the ice feeling like that was what we were hoping to accomplish."

White said the Americans are trying not to get ahead of themselves thinking about the gold medal, only that they wanted to skate well in the long program.

But Moir said he and Virtue feel like they are in a position to come back. "We want it bad, we want that gold medal," he said.

Russians Elena Ilinykh and Nikita Katsalapov are in third with 73.04 points. Canadians Kaitlyn Weaver and Andrew Poje, considered an outside shot for the podium heading in, are in 7th place with a score of 65.93, while Alexandra Paul and Mitchell Islam are in 18th with 55.91 points.

Virtue and Moir plan to savour Sochi, likely their last Olympic appearance
May 11, 2018 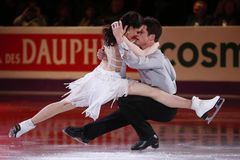 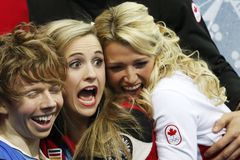 Figure skating partners rely on ‘a whole conversation you can’t see’
May 11, 2018 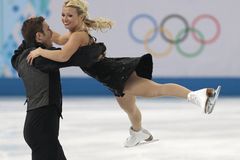 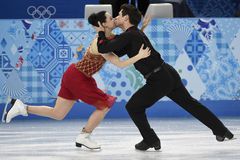