After being battered, manhandled, shut out and generally embarrassed by a team of hockey players from Russia over the weekend, a few shell-shocked American players struggled to explain what had just happened. "I don't really have words for it," forward Ryan Stoa said.

Mr. Stoa was born in 1987 – seven years after "the Miracle on Ice" – and probably didn't think too much about history and context, and how politics sometimes intertwine with sports.

But one man knew exactly what he'd just seen. Leaning against a wall in the bowels of the Gangneung Hockey Centre after the game, a wry smile on his face, Igor Larionov recognized it. The former Soviet and NHL star needed just two words to describe what transpired on the ice.

"Foreign affairs," Mr. Larionov said with a laugh. "Let's put it that way."

Hockey wasn't supposed to matter at these Olympics because the NHL isn't here. And for the first few days of play, that seemed to ring true. A lacklustre Canadian team lost to the Czech Republic in a shootout. (Although on Sunday, Canada beat South Korea 4-0.) The Russians sleepwalked through a 3-2 loss to Slovakia. The Americans blew a two-goal lead against a roster of Slovenians. No one seemed to care much.

But then, the Russians played the Americans and suddenly it was the 1980s again. It was NHL-fast, it was dirty and it was inspired. But it was a certain kind of inspired that international hockey hasn't seen in while. Anyone who thinks there aren't a few games at these Olympics that matter more than others hasn't been reading the headlines.

"We're talking about sports. But next to sports goes politics," said Mr. Larionov, a veteran of the Soviet "Big Red Machine" that was as much a demonstration of Russian hockey prowess in the 1980s as it was an expression of Kremlin ideology.

"What's happening in the world right now – two countries trying to push each other with disagreements and politics – I've been around, I lived on this stage myself in '84 and '88 … that's war. You're going to war. That's how it works."

After nearly 30 years, Cold War hockey is back with a vengeance. Welcome to hockey in the era of Trump.

Less than 24 hours after the U.S. Justice Department formally charged 13 Russians and three Russian-controlled companies with meddling in the 2016 presidential election, 22 Russian hockey players steamrolled over the U.S. hockey team in Pyeongchang. They meddled with the U.S. power play, they meddled with their fore-check and they trounced them 4-0. For the Americans, it was an important game. For the Russians, it looked personal.

Mr. Larionov, who is in South Korea doing commentary for Russian television, said the game was being broadcast in Moscow during prime time.

"Everybody was watching," he said.

"I'm sure they got a phone call from upper management to play hard," he quipped.

It was evident in the stands that the game mattered. At one end of the rink, a small army of about 60 Russian backers waved flags and held up giant pictures of Ilya Kovalchuk's face, while pom-pom carrying Russian cheerleaders performed choreographed dance moves to OutKast's Hey Ya!, and any other stadium jam the arena DJ put on. This was no accidental gathering of Russian fans on an impromptu road trip – someone had come prepared.

At the other end of the rink, at least two U.S. fans came dressed as Uncle Sam, another two as pro wrestlers clad in stars and stripes. Whenever the American fans got a "U.S.A." chant going, it was drowned out by a louder chorus of "Rossiya."

For a game in which the Russian team wore non-descript red jerseys and could not display its flag, playing only as "Olympic Athletes from Russia" because of its punishment from the International Olympic Committee for doping at the Sochi Olympics, there were Russian flags seemingly everywhere else in the building.

On the ice, the Russians were physical – much more than the Americans. Even Pavel Datsyuk, winner of four consecutive Lady Byng trophies for being the NHL's most-sportsmanlike player, attempted to bowl over a U.S. player in the opening minutes.

But it was Nikolai Prokhorkin, a star of the Kontinental Hockey League, who was most visibly nursing the grudge. In the first period, Mr. Prokhorkin went after American Jordan Greenway and badgered the physical forward for nearly half the length of the ice. When their wrestling match ended up in front of the Russian bench, Mr. Prokhorkin looked as though he was trying to flip Mr. Greenway into it.

"I don't know really what started it, but he didn't want to let me go," Mr. Greenway said after the game, a tinge of bitterness still in his voice. "He wanted to do a little dance, so I'm always down for a little dance."

Two periods later, Mr. Kovalchuk, the tournament's most-skilled player alongside Mr. Datsyuk, skated over to Mr. Greenway between whistles and began trash-talking him. At that point, the Russian star already had two goals, the second of which he celebrated by putting a finger to his mouth as if to shush the American fans.

Asked later what Mr. Kovalchuk was saying, Mr. Greenway wouldn't elaborate. "I don't know. I didn't want him to get a hat trick, that's all I wanted," he said.

A poker-faced Mr. Kovalchuk dismissed the suggestion that the game was different than any other: "No anger, it's just sport. It's emotions," Mr. Kovalchuk said.

It's entirely possible that the Russians will slumber their way through another game at this tournament as though it doesn't matter, and that the United States will lose to another hockey backwater. But if Russia plays the Americans again, or Canada, it's almost certain the game will take on similar tones. The Russians have clearly come to Pyeongchang with a chip on their shoulder.

Mr. Larionov seemed almost wistful when talking about it after the game. Hockey was being played, and there was more than just the game at stake. It was just like old times.

For the Russian team, "It's an opportunity to show the world we can be banned," Mr. Larionov said. "But you're not going to break us." 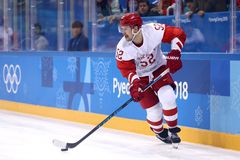