Though losing a hockey semi-final is a fresh, icy hell for the Canadian Olympic men's team in Pyeongchang, imagine what bliss it is for Brooks Macek.

Macek grew up in southwest Winnipeg, the son of a German immigrant. He went to high school at a hockey factory in Saskatchewan. As a 16-year-old, he moved to the Western Hockey League. At 18, he was drafted by the Detroit Red Wings. It was all coming together.

And then, like so many others we never hear anything about, his professional hockey career went dark. He didn't sign in Detroit. He re-entered the draft, but nobody wanted him. At 21, looking for something to do, he ended up with the Iserlohn Roosters, a perennial loser in Germany's Deutsche Eishockey Liga.

(In the delightful way of these things, the club that would become Iserlohn was founded by Canadian soldiers stationed at a nearby base, who built themselves an outdoor rink to fool around on. In a short while, it went all Heritage Moment with the locals.)

Macek spent four years in Germany's industrial west. In 2015, his circumstances improved. He was traded to the Red Bull-controlled Munich team. He lives there year-round now.

"It's amazing," Macek said. "I mean, we got Oktoberfest there."

Having never represented Canada at any significant level, Macek accepted an offer two years ago to go to a camp with the German team. He could not have thought then that it would mean anything more than wearing the colours.

But he's an Olympic medalist now. Maybe an Olympic gold medalist. This team didn't even qualify for the Sochi Games. If Germany wins here, it's not quite a Miracle on Ice, but it's close.

Beyond the hardware, the Germans will get to say their desultory history in Olympic hockey – two bronze medals in a century – has been burnished by defeating the country that cares most about it in a game they badly wanted.

(We should find room in here to quote the greatest sports lede in history, from the Daily Mail, referencing the 1966 World Cup final between England and Germany: "If the Germans beat us at our national game today, we can always console ourselves with the fact that we have twice beaten them at theirs.")

(We'll probably never get to do this in a Canadian context again. And so.)

Macek came out to speak long after most of the Canadian team had blown through. Many refused to talk about a game that will be erased from our national memory banks within a few days. The ones who would had no answers.

"I'm not sure what happened," Chris Lee said.

I do. A team of ringers and replacement players with little to no familiarity with each other played above expectations for more than a week and was due to dip below them at some point. Perhaps the point they chose was not optimal, but at this level you don't get to pick.

For one period, they were utterly discombobulated by the Germans. In the second, they returned to Canadian-style hockey – though it was more of the fight-clubbing NAHL variety than the NHL stuff we're used to on this stage.

Gilbert Brulé's full-speed elbow-to-the-head on David Wolf and subsequent expulsion may not have ruined his team's chances, but it dirtied up its reputation. Canada may still take a medal, but they won't be any neutral fan's scrappy favourites as this thing ends.

They made it interesting in the third but could not climb out of the trench they'd dug for themselves. It ended 4-3.

None of this should be terribly surprising. And none of it says anything about Canada's place in the hockey world. Our best are still the best.

What happened in South Korea was that our ninth or 10th tier of players could not beat another country's elite. In the larger context, there is no larger context. It's just disappointing.

That's how the Canadians looked – disappointed. Not beside themselves or wretched. Nothing in the same emotional postal code as the Canadian women's team after losing to the United States.

"We let our country down today," said Mat Robinson. However well-meaning, that's nonsense. They tried, which is all that could be expected of them. A bronze for this group – they'll play the same Czech team on Saturday that beat them in the round-robin – should mean something. It probably won't, but it should.

For most, it'll be one more interesting hockey experience to throw on the career pile.

We've talked about this Canadian team like it's a troupe of hobos or something. But many of them had their moment in the hockey sunshine.

Derek Roy was a star with the Buffalo Sabres. Rene Bourque was a regular on two Original Six teams. Chris Kelly won a Stanley Cup in Boston.

This defeat won't define their careers. But taking our narrow national interest out of it, think about what it means to someone like Macek. Someone who plays hockey but has never really mattered as a hockey player.

Afterward, Macek was not ecstatic. He didn't woo-hoo his way off the ice. Actually, he was unusually calm. As if it had not hit him yet, which it probably hadn't. Mostly, he seemed tickled that so many people wanted to talk to him. He would've stood there all night.

He did that thing every Canadian athlete who is not a hockey player does after they've done something unexpected: Talk this all up as a national learning opportunity.

"The main sport [in Germany] is soccer. And then it's …" Pause for thought. "It's just soccer. Kids back home, maybe it'll push them toward ice hockey."

By "back home" Macek meant Germany, and by "ice hockey" he meant hockey.

What was Germany's goal coming here?

Well, I suppose every dachshund has its day.

It would be churlish to do anything but applaud Germany's achievement, not least because in one small way it is Canada's as well.

Some of Macek's family still lives in Winnipeg, including his father, who is a physician. Macek goes back to visit in the summer. This country made him, and he's still one of ours, regardless of where he lives.

Canada won't win a gold medal here, but a Canadian still might. One hockey dream come true in the midst of 36 million wouldn't be a lot, but it would matter.

Team Canada to play for bronze after 4-3 semi-final loss to Germany
February 23, 2018 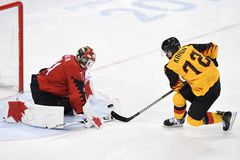 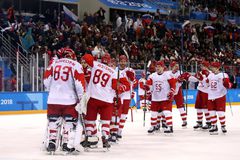 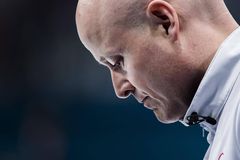 ‘My emotions got the better of me’: Canada’s Larocque apologizes after refusing to wear silver medal
February 23, 2018 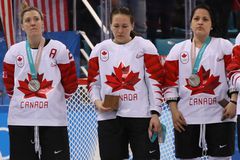 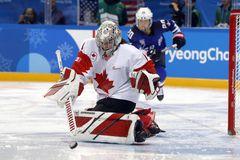