There's a battle royal brewing in the women's eight rowing race this week.

And on the first leg, the Canadians came out on top.

On the heels of disappointing turns from the men's eights and the men's and women's lightweight double sculls, it was Canada's women's eight team that shone on Sunday.

They didn't simply win their heat, they dominated it, posting the top time of the day to better even the powerhouse U.S. team that hasn't lost in competition in years.

As winners of their heats, Canada and the United States now both head directly to the final, where the world's two top teams will once again battle for gold.

It's a rivalry Canada has struggled in of late.

At one recent World Cup event, the Americans came out on top by 0.03 seconds – or as Canadian veteran Darcy Marquardt demonstrated with her fingers Sunday, about five centimetres.

The Americans similarly won by less than a second at the world championship last year.

This time, the Canadians are determined for a different outcome, and they were encouraged by their result Sunday.

"When we heard the Americans were just a fraction slower than us, it kind of gives us a little boost," Marquardt said. "We've never had the faster time going into the final even over the last two years. Whether it's significant or not, I don't know. It's a different race in the Olympic final."

Canada's women's eight team discovered that four years ago in Beijing, where an unheralded team from the Netherlands surprised the field and sneaked in for silver to leave Marquardt and Co. in fourth after entering the race a medal favourite.

The Canadians are in that spot once again – ranked No. 2 in the world – but wanted to make a statement even in the heats at the Eton Dorney venue that they're ready to rebound.

So with several of their fellow Canadian boats wilting around them, including a men's eight crew that finished last in its heat on Saturday, the women pushed out hard and fast right from the start.

Now the challenge will be to fight the United States to the finish line once again.

"It's going to be a showdown," Canadian Ashley Brzozowicz said. "Any boat can do something crazy so we want to get out ahead and we want to win that race."

"We'll just lay it all on the line on Thursday," teammate Janine Hanson added.

That sort of confidence is welcome for Canada's rowers, who aside from the men's pairs duo of David Calder and Scott Frandsen will race in repechages with just one chance left to continue in the meet.

The men's eights will take part in theirs early Monday morning and must place among the top four (out of six boats) in order to advance to the final Wednesday.

There's more to push for than simply a berth, however, as teams are also angling to finish higher in order to get a better lane for the final. In the sometimes windy, sometimes rainy conditions expected in the English countryside, every little edge can help.

Forecasters expected Canada's rowers to scoop as many as four medals from its seven boats competing at these Games, a target that will still be quite reachable provided both eights boats and Calder-Frandsen can come through.

While a dismal showing from the women's pairing of Lindsay Jennerich and Patricia Obee in a heat Sunday wasn't expected, they were adamant that they can rebound to push through to the repechages and beyond.

Then there's the men's four team, which will be the final Canadian boat to make its debut when it takes part in heats on Monday. It has a chance to surprise.

"They're kind of our dark horse, to be honest with you," Rowing Canada director of high performance Peter Cookson said. "They've posted some exceptional times in training and they're a bunch of young guys. I'm expecting they'll make it into the final." 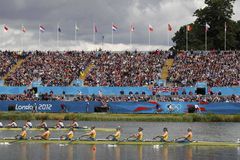 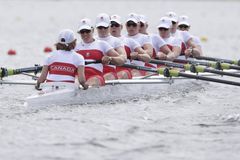