Four years ago in Moncton, with Diana Matheson playing provider, Canada beat China 1-0 on a Christine Sinclair stoppage-time goal in its last game on home soil before the London Olympics.

Thanks to another assist from Matheson, the Canadian women did it again Tuesday night when they dispatched Brazil 1-0 deep into added time to end their pre-Rio Canadian campaign on a winning note.

In 2012, the Canadians went on to win bronze at the Summer Game. The odds are likely longer on a podium finish this time around but Tuesday's gritty performance in Ottawa showed 10th-ranked Canada will be worth watching at the Olympics with its veteran core surrounded by promising youth.

It was an impressive bounce-back after a disappointing 2-0 loss to No. 8 Brazil in Toronto on Saturday.

"I thought the first game the players struggled a little bit at home playing at home in front of the fans. But tonight they certainly got to grips with it and I thought, at times, showed what the potential is of this team pushing into Rio," said coach John Herdman.

Playing a 4-3-3 with Sinclair lurking slightly behind fellow forwards Deanne Rose and Matheson, the Canadians showed a fluid attack. Just 17, Rose adds pace to the guile and vision of Sinclair and Matheson.

Sophie Schmidt and a poised Jessie Fleming, just 18, pulled the strings in midfield while 20-year-old midfielder-turned-fullback Ashley Lawrence, a star in the making, marauded down the left flank. At times, the only way the Brazilians could stop her was to deck her.

Centre backs Kadeisha Buchanan, 20, and Shelina Zadorsky, 23, were on point. And goalkeeper Stephanie Labbe was solid at the back when needed.

Janine Beckie, a 21-year-old who scored the winning goal Tuesday, has proved to be dangerous with nine goals in 18 appearances (11 starts).

With 11 players under the age of 23, there's more than a little Forrest Gump in this team. When it comes to the Canadian women, like a box of chocolates, you never know what you're going to get.

While there are plenty of crowd-pleasers, some are still learning on the international scene.

Goals remain hard to get. In its last eight games dating back to the 2-0 loss to the top-ranked Americans in the final of the CONCACAF Olympic qualifying tournament in February, the Canadians have seven goals.

On Tuesday, Canada created a string of chances but was unable to convert until the last kick of the match. Herdman acknowledges scoring remains a challenge.

"That's the dream for us — putting away a Tier I team by two goals, three goals. But it's our current reality. The games are going to be tight. We have to dampen the expectations. We are going to have to fight in games and grit it out. And then hopefully the quality comes though with some of the players we added."

He says the skill is there to score, with Tuesday's game showing his team has "that extra gear."

"It's not necessarily a confidence thing because we know this team can score goals," he added. "We've done it before against these sort of teams in the last few months. It's more that you just show that resilience this close to an Olympics that when it's tight that we can find a way to win."

The women return to their clubs for the rest of the month before reassembling July 1 for a camp in Vancouver. They head to France in mid-July for a closed-door game against China and then a friendly with No. 3 France in Auxerre on July 23.

The team will leave France for Brazil, where it opens Aug. 3 against No. 5 Australia. Canada will also face No. 2 Germany and No. 95 Zimbabwe in round-robin play.

There is not much time to garner what the younger members of the team needs most.

"I just think it's caps under the belt now for these girls— it's just experience," said Herdman. "Deanne Rose is 17 years of age. There's no 17-year-old Brazilians on the pitch."

He has been playing down expectations after the high of 2012, but cannot resist dreaming of another podium finish.

"We're living off the back of 2012," Herdman said. "The goal is to try and push the podium again. It's a young team. For some of these girls, it's their first Olympic Games, but we'll give it our best. Everything we've been pushing is around individual personal bests.

"They've been out on the pitch working on techniques, tactics, fitness to try and deliver a team personal best, which will be to jump on that podium and see that flag rise again."

The 21-woman Olympic roster, including three alternates, will be announced later this month.

"We have a lot to do before Rio but we're in an exciting place," said veteran fullback Rhian Wilkinson, who earned her 175th cap Tuesday. 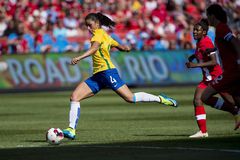 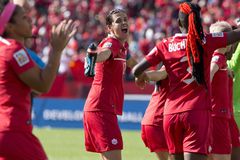 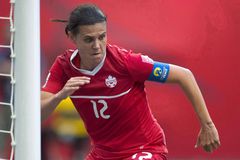