"The rivalry lived up to its billing," said Oxford captain Joey Wenig, a law student from Calgary. Oxford's winning goal was scored by Canadian Chris Byrne, from Windsor, Ont.

Oxford and Cambridge have been battling each other on the ice for more than 130 years, making it what many consider to be the oldest hockey rivalry in the world. The 100th varsity match was played in St. Moritz, Switzerland, site of the first match in 1885. Hundreds of alumni flew in from around the world and competed in two alumni games. The universities' development teams, the Oxford Vikings and Cambridge Eskimos, also faced off (the women's teams were invited but couldn't attend because of scheduling conflicts).

"We won the two alumni games and the Eskimos game, but nothing makes up for the heartbreak of a sudden-death loss in the main event, especially as the momentum was in our favour," said Bill Harris a Cambridge anatomy professor who plays for the Eskimos and serves as a volunteer coach. "It was an amazing game."

The weekend boat races were pretty amazing for Cambridge, too. The Light Blues comfortably beat the Oxford Dark Blues to win the 164th men's varsity boat race on a gloomy River Thames on Saturday. Cambridge also won the earlier women's race by an even larger margin while both Cambridge reserve crews won their races on a day of complete domination. Oxford won four of the previous five men's races. Cambridge leads the overall series 83-80. 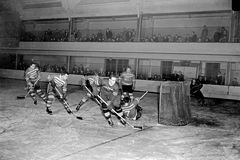