With 12 Grand Slam titles under his belt, including two this year, few people are likely to dispute Novak Djokovic's current position as the world's top tennis player.

But three years ago when he released his book, Serve to Win: The 14-Day Gluten-Free Plan for Physical and Mental Excellence, detailing the unique dietary regimen that he credits for his recent run of success, he raised some eyebrows. Particularly surprising was his assertion that he begins each day with two spoonfuls of Manuka honey to get some instant energy.

While that might work for Djokovic – and few are likely to argue with his results – weekend warriors looking for an edge in their own games might want to think twice before following suit.

"Manuka honey is very good for you," says wellness chef Andrew Muto. "The problem with Manuka honey is, like any sugar, [it spikes your blood sugar] and it comes down."

When it comes to fuelling athletes, Muto has a résumé like few others. In addition to working with recreational tennis players, much of Muto's summers are spent with former National Hockey Leaguer Gary Roberts at his elite hockey camp in the Greater Toronto Area. There, he teaches stars such as Connor McDavid and Steven Stamkos the finer points of healthy cooking and provides them with recipes to take back to Edmonton and Tampa, respectively, to help get them through the grind of the NHL season.

While hockey professionals and tennis players may have differing energy requirements, the principles for smart eating to fuel performance on the rink or the court are exactly the same: Eat everything in moderation and don't complicate things.

"They have to stay lean, they can't be bulky," Muto says of tennis players. "I always try to encourage my athlete clients to eat more carbs at the beginning of the day and in the evening less. So your plate at lunchtime should have some brown rice or sweet potato, some chicken or fish, some good salad. The salad should be a large portion."

In Muto's experience, what an athlete eats in the evening can set them up for success in matches the next day, or it can grease the wheels for disaster.

For weekend tournaments beginning shortly after the crack of dawn, Muto recommends consuming a breakfast using some combination of eggs, oatmeal, fresh fruit or sheep yogurt – it's higher in fat and easier to digest than regular yogurt – at least two to three hours before a match.

If a player is still hungry 90 minutes or so before he takes to the court, Muto recommends athletes top up their energy reserves with either some oats and nut butter, or maybe a banana with pumpkin seed butter in a wholegrain wrap.

If that's still not enough, then something like half a banana 15 minutes before the start can be used to ensure there's enough energy to see a player through a game.

Between games, Muto says, players should take advantage of whatever window they have available to them to refuel, but it's important that they eat something satisfying but that won't repeat on the player during exercise. As a result, citrus is a big no-no due to its acidity.

"Sometimes guys won't feel hungry, but they still need to have something, even if it's as simple as taking a fresh mango, peeling it, blending it and adding a tablespoon of coconut oil," he adds. "So now you have sugar and fat."

Because of the amount that tennis players sweat during games, Muto says it's vital that players not only replace the water but also the electrolytes and minerals. While he steers clients clear of drinks such as Gatorade, because of its use of high-fructose corn syrup, he says other options such as coconut water or Canadian-made sports drink BioSteel are fine. However, those not willing to pay for the privilege can make a home-made concoction that is just as effective.

"If I was a weekend warrior, I would replenish myself with a simple recipe of golden beets and apple juice," he says. "So you juice half a golden beet to two apples, you put it in a [bottle] and add water, put it on ice and drink it."

The high-mineral content of beets makes it what Muto calls "a perfect drink," though those requiring more sodium might want to add a sprinkling of pink Himalayan salt.

When he's not focused on athletes, Muto tries to spread his message of smart eating to the general public, and for the past six months he has operated the Umanii cafeteria for the 600-odd employees and council members at Vaughan City Hall, in suburban Toronto.

While he feels a lot of the marketing around food, particularly in the natural food industry, can lead people astray, he says ultimately food should be enjoyed. Nobody's diet is perfect all the time, he says, but when the professional athletes on his watch want to stray from the straight and narrow, they do so smartly.

So having a burger or a pizza every now and again is fine, as long as it's good quality. There is a marked difference between comfort food and junk food, he says, and people often get the two mixed up, adding that no one needs junk food.

"[People] misconstrue comfort food and junk food," he says. "Junk food is stuff that is overprocessed."

At the end of the day though, food is only one piece of the puzzle, and that holds true for tennis players as much as anybody else.

"If you're a recreational athlete and you work out five days a week, eat smart, make good choices, sleep well, recover well, [you still need to] enjoy life," he says. "Enjoy your life because stress kills more people than any bad food." 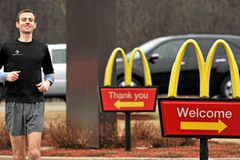