At the 1906 Summer Games, Irish long jumper Peter O'Connor refused to countenance the raising of the Union Jack after he'd won silver.

In the midst of the medal ceremony, Mr. O'Connor darted from the podium, shimmied up the flagpole and began waving an Irish standard. As officials rushed over to pull him down, Irish and American athletes fended them off.

Those Olympics – since rendered "unofficial" – are remembered in large part for being the first to feature a political protest. That trend reached its apogee at Mexico in 1968. Czech gymnast Vera Caslavska refused to stand at attention for the Soviet anthem. Americans Tommie Smith and John Carlos raised their black-gloved fists during The Star-Spangled Banner. Other Americans winners wore black berets in solidarity.

All of these athletes suffered varying levels of professional disaster as a result of their stands.

"All that matters is what you do [in life] – whether you're prepared to do what it takes to make change," Mr. Carlos would say later. "There has to be physical and material sacrifice."

As a general rule, very few pro athletes have been willing to make those sacrifices. There was a brief flowering of political consciousness in sports – particularly black American consciousness – in the 1960s and 70s. Driven by the ethical spur of the civil-rights movement and the example of Muhammad Ali, a few high-profile pros joined in – Kareem Abdul-Jabbar, Bill Russell, Jim Brown, et al. They were a small and often excoriated minority within the minority.

By the 1980s, that nascent movement had bled off in America. Political shifts had something to do with it, but the thing that had notably changed within sports itself was the money being thrown around.

In 1975, Curt Flood's (personally disastrous) stand against baseball's culture of indentured servitude created free agency. That season, Hank Aaron was the highest-paid player in the country's most popular sport. He made $240,000 (U.S.) – roughly 23 times the income of the median American household.

Thirty years into the free-agency era, baseball's best paid player (Alex Rodriguez) made $22-million a year – 523 times what the middle-of-the-graph American family got by on. The financial trend upward was seen across all major sports and approached vertical.

Players suddenly had a lot to lose, and they plainly feared losing it.

There was still a small bit of room for a few iconoclasts. Reactions to them varied depending on their value as employees.

Toronto Blue Jays first baseman Carlos Delgado was a superstar. When he refused to stand for the playing of God Bless America in 2004 in protest of America's foreign wars, he was booed in New York. He went on to enjoy several cuddly years with the New York Mets.

Craig Hodges was a role player on the great Chicago Bulls teams of the early 1990s. He showed up at the White House in a dashiki and handed then-president George H.W. Bush a letter of grievance on behalf of the African-American community. He never played in the NBA again.

These were both lessons to the rest – only certain people are allowed to make trouble. Very few elite players showed any inclination to jeopardize their shoe contracts. Others followed their lead.

Mr. Hodges's greatest sin against sports orthodoxy was probably not putting a U.S. president on the spot, but instead the time he ripped teammate Michael Jordan for "bailing out" on his political responsibilities.

"We're in war when you look at what happened in Los Angeles, what's getting ready to happen in Chicago, Newark," Mr. Hodges said in Chicago. "The poverty in the city is so hellish, just look across the street. Then you have us playing in here – how much money did we make here last night? How many lives will it change?"

It sounds eerily contemporary, but Mr. Hodges said it in 1992 during the era of sports conformity.

As a player, Mr. Kaepernick is an unusual spot – a household name, but not a valuable asset. He could be easily disposed of. Twenty years ago, he probably would have been.

What's remarkable about Mr. Kaepernick's anthem protest isn't the act as such, but the reaction to it.

His team lined up behind him. "We recognize the right of an individual to choose to participate, or not, in our celebration of the national anthem," the 49ers said in a statement.

NFL commissioner Roger Goodell was more cautious, but did likewise: "Players have a platform, and it's his right to do that."

Those comments, respectively, secured Mr. Kaepernick's current livelihood and his future prospects, such as they are.

If you are an optimist, this was the establishment recognizing that things need to change.

If you are a realist, it may just be football acknowledging that it is too big to be taken down by a mob of angry fans. From the NFL's perspective, why divide your own house to reassure the sort of people who are often the league's most committed customers? They're not going anywhere.

Freed of their existential worries, others are now lining up to speak out or join in. Carolina Panthers quarterback Cam Newton – a man not previously keen to say too much about anything – passionately addressed the issue of state violence against American blacks on Wednesday.

"I have a son and a daughter that I'm responsible for. So how would I be if one day they come home and there's no more daddy?" he said.

Even Mr. Jordan has had to engage the issue (though in his familiar "I can see it both ways" style).

This momentum is unstoppable now, as pros realize that their employers' timid loyalty has shifted from customers to producers. At its base, this movement – at least in sports – obeys market imperatives. It can be allowed as long as the basic financials are not put at risk. It has the salutary side-effect of allowing a brain-addling endeavour to look thoughtful and progressive. Through such compromises are revolutions made.

Mr. Carlos talked about a "material sacrifice" that was necessary to protest. It was made by his generation. As a result, this one is freed to speak with a much greater megaphone than he or any of the real athletic risk-takers through history could have imagined. 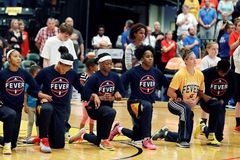