For most of Tuesday night's contest, the Toronto Raptors looked like they were headed for an embarrassing loss to one of the basement dwellers of the Eastern Conference.

After trailing for the majority of three quarters, the Raptors ambushed the Atlanta Hawks 30-13 in the final quarter and escaped with a 106-90 victory.

Behind 25 points from DeMar DeRozan, 15 from Jonas Valanciunas and 14 from C.J. Miles, the Raps won their fifth straight, sweeping the four-game season series with the Hawks.

Toronto (46-17) remains in first place atop the East standings, two games up on the Boston Celtics.

After the game, DeRozan was asked about the article penned in The Players' Tribune by Cleveland Cavaliers star Kevin Love Tuesday, saying he was inspired to divulge his own struggles with mental health after DeRozan had spoken about his. DeRozan said he plans to reach out to Love soon.

"It made me feel great. That was my whole intent of me speaking out. I understand it's hard to step up and do a thing like that, so if I had to be the sacrificial lamb to open up that gate to make everybody else feel comfortable, and share their story, and help the next person, that's what it's all about," said DeRozan.

"Man, the last week has been probably one of the most incredible things that, me personally, I've witnessed, period. Me being who I am, and the response, and everything I've got back from it was so positive, you know, and it made me feel, you know, pretty damn good, honestly. So it's cool to be able to help somebody."

It was a feel-good moment after a game in which the Raptors had been largely disappointed in their effort for much of the night.

The Hawks opened Tuesday's game with a surprising 11-4 run in the first three minutes. The Raps were caught on their heels defensively, they missed shots, and carelessly turned the ball over three times. It hardly looked like a contest between the first place and 15 place teams in the Eastern Conference.

The Raps' starting small forward OG Anunoby was sidelined for his third straight game with a sprained right ankle. Malcolm Miller started in his place for a second consecutive contest, with Norman Powell once again getting the final four minutes of the first half that Anunoby would also usually play.

Casey said someone else might start in that position on Wednesday night when the Raptors play in Detroit. The Raps signed another small forward to the roster on Tuesday, on a 10-day contract -- Nigel Hayes from the NBA G League's Westchester Knicks. The 23-year-old out of the University of Wisconsin was ineligible to play Tuesday for the Raptors, as he was still acquiring his work visa. Casey said he was particularly excited about Hayes' vastly improved three-point shooting.

Five points from Miller mid-way through the first helped start to jolt the Raps to life, but his sloppy team still trailed 28-27 by the end of the quarter.

The Raps continued to labour in the second quarter, clanking shots every which way. It was a three-pointer by Powell in the final minute that finally tied the game 47-47.

But the final minute of Toronto's frustrating and discombobulated half also saw both Kyle Lowry and DeRozan pick up angry technical fouls. After shooting 35 percent in the half to Atlanta's 47, the Raps trailed 51-50 going into the locker room.

Despite being way out of contention for a playoff spot, the visiting Hawks kept pushing the Raps.

Lowry, who had gone scoreless in the first half (and would finish the night with four points of 2-of-6 shooting) continued to have a bad night. He picked up his fourth foul half-way through the third quarter, and it looked ugly – grabbing John Collins at the waist as he was leaping toward the basket, causing the Hawks guard to crash hard to the ground. Officials called the foul a Flagrant 1 for unnecessary contact.

Lowry had to head to the bench.

DeRozan, who was named Eastern Conference Player of the Week a day earlier for the fourth time this season, rolled for a 12-point quarter, as the third quarter was about to close. But it was slippery to hold, and Atlanta went up 77-76 going into the final quarter.

The Raps's bench stepped up in the fourth, jumpstarted by a pair of threes from C.J. Miles – his third and fourth of the night. They built a 10-point lead, the biggest and the only convincing one Toronto had had all night to that point.

A series of big plays in the quarter by Jakob Poeltl -- including three buckets, six of his nine rebounds and one of his three blocks on the night – helped the Raptors take charge for good.  A game that began very shaky ended with the Raps looking deep down their bench, and allowing little-used youngsters close it out.

"It's just a matter of cracking the whip and cracking the whip and reiterating the fact that now you are the hunted and you are going to get everyone's best shot no matter what the record," said a disappointed Raptors Coach Dwane Casey after the game. "If you don't play, hustle is going to beat talent. Hard work and physicality is going to beat talent every time if you don't come out with your high beams on. It shouldn't take us three quarters to figure that out, but it did." 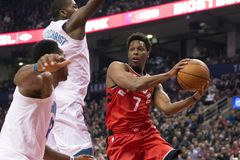 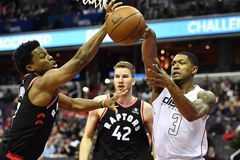 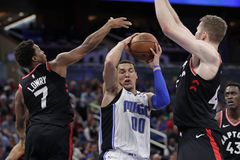