Rick Klassen's brain is suspended in a container of formaldehyde located inside a laboratory at Toronto's Hospital for Sick Children. His brain was procured Dec. 10 when the former B.C. Lion and Saskatchewan Roughrider died of lymphoma at the age of 57.

The assumption is Klassen is all but guaranteed to have had serious brain damage. He played 10 years in the CFL at defensive tackle, a position where he banged helmets with blockers every time he was on the field. He also suffered multiple concussions and thousands of what he called "mini-concussions," hits that left him seeing stars. But Dr. Lili-Naz Hazrati isn't ready to offer up any conclusions about Klassen. Not yet, at least.

As a researcher for the Canadian Concussion Centre at the Krembil Neuroscience Centre in Toronto Western Hospital, Hazrati works out of the Sick Children's lab and has done hundreds of brain autopsies. She is calling for more research before rushing to judgment and alerting everyone who has a concussion they might be at risk of having Chronic Traumatic Encephalopathy (CTE), a progressive neurological disease that assaults the brain and can lead to dementia.

Globe editorial: How Sidney Crosby is making the NHL wiser about concussions

Stoking the issue is the fact more and more former NFL players have donated their brains for research and are showing tau proteins, the bad protein that kills brain cells. It's a finding that has sent a shudder through most of professional sports. But in Canada, the testing has really only begun. That means there isn't enough data yet to be definitive.

"We opened a door but we haven't examined everything on the other side of that door," Hazrati says. "We have so much more to learn. The pathology is there but there are differences, too – who gets it? Why do they get it? We're still in the gathering phase."

Over the past six years, Hazrati has chronicled some glaring discrepancies. In 2015, NHL defenceman Steve Montador died suddenly at the age of 35. He played 10 seasons in the league, had several concussions and suffered from depression. An examination of his brain showed he had CTE. His family filed a lawsuit against the NHL alleging the league failed to warn Montador "of the long-term neurological risks associated with repetitive head trauma."

That same year, Hazrati examined retired NHL enforcer Todd Ewen, 49, who played 11 seasons and was convinced he had CTE. Ewen was so certain of it he killed himself rather than disappear into dementia. The autopsy of his brain showed no CTE.

Then there are the football players. Hazrati has worked on the Krembil Neuroscience Centre's relationship with the CFL Alumni Association. (The CFLAA informs its members about the research being done then asks the former players to have an assessment of their brain while alive, then donate it upon their death.) To this point, 12 former CFL players have been examined and only three had CTE. Compare that to the Concussion Legacy Foundation at Boston University, which announced last fall that it had found CTE in 87 of 91 former NFL players.

The Legacy Foundation also looked at the brain of former Winnipeg Blue Bomber defensive lineman Doug McIver and discovered it was rife with CTE. But again, there have been surprises. Former Calgary Stampeder offensive lineman John Forzani played seven seasons and suffered multiple concussions. And yet, when his brain was donated to the CFLAA project soon after he died of a heart attack, an examination found no sign of CTE.

"It was absolutely amazing," Hazrati says of the Forzani finding before telling of another patient who had a series of concussions and thought he had CTE. He was depressed and didn't function well in his final years. In the end, his brain was subjected to a battery of tests and, upon further review, he was diagnosed with vasculitis, inflammation of the blood vessels. "It's a rather rare thing but that's what he had," Hazrati says. It happened, too, that another individual presenting with CTE was found to have Amyotrophic Lateral Sclerosis, ALS.

"I think the disease pathology is true; there is CTE; there is tau in the brain," Hazrati says of the science at work. "But how can I explain my case about someone who has never had a concussion [yet is found with a degenerative brain disease]?"

Klassen's family is curious to find out just how damaged his brain was, considering how many hits he'd taken to the head. Chad Klassen, a sports reporter with CFJC-TV in Kamloops, had grown up familiar with his dad's mood swings and periods of depression.

The son interviewed his father in March of 2015 in a sit-down session that can be found on YouTube. In it, Rick Klassen says he had "four or five major concussions and I've had thousands of 'seeing stars,' which are considered mini-concussions. Anyone who plays a violent position like defensive lineman where you're hitting other really big men, it's a risk you take."

Klassen went on to say the lingering after-effects of those concussions had caused him "a number of problems because [it involves] the frontal lobe where all your reasoning is, your emotional control is. That's why you see a lot of players have so many difficulties post-career because it's not easy if you can't control your emotions. It's very difficult to have any kind or relationship. It's a problem I've suffered."

Chad Klassen said his dad became interested in donating his brain after he heard about NHL player Keith Primeau retiring because of all the hits he took to the head. Rick Klassen could also relate to Wade Belak, a former Toronto Maple Leaf, and Rick Rypien, a former Vancouver Canuck. Both players died suddenly, after fighting depression. "It really hit home for my dad," Chad says. "He would say he was in a similar situation. He didn't like how his brain felt."

Nick Hebeler visited Klassen three weeks before he died. Hebeler and Klassen were friends and teammates on the Lions' defensive line. In their prime, they went after the football like Rottweilers on a T-bone steak. In a match-up with the Ottawa Rough Riders, Hebeler said he was knocked out on his feet but stayed in the game.

"I threw up in the huddle and everything was blurry," Hebeler says. "I walked to the line of scrimmage and [Ottawa offensive tackle] Kevin Powell yelled to his quarterback, 'Run the other way. Hebeler's hurt.' We didn't know any better. We called them dingers."

We know better now, but exactly what it takes to trigger a concussion, how to treat and prevent it remains an unsolved pursuit. What's needed is a broader database with more players offering more results to help unlock the secrets of the brain. That's why the more Hazrati investigates, the more she wants to slow things down so the results can be processed to their right conclusion.

"The slower pace is to understand it before coming up with any sort of disclosure. Each case is very unique. I've been learning a lot from every case we've received and I can't say, after this many, I would be satisfied to say I have an idea about something," Hazrati says. "To really connect something to something in medicine, or to define if you have a higher risk of something if you do this or that, you have to have large studies.

"We have all gone a little bit too fast computing about our cases. I think we have to be cautious about that." 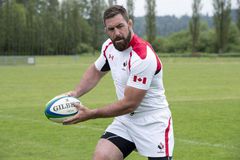 Opinion
Let’s act on concussions and make sports safe again
December 5, 2016
Canadian ex-athletes call for early-age education and training on concussions
December 6, 2016
Follow Allan Maki on Twitter @AllanMaki
Report an error Editorial code of conduct
Due to technical reasons, we have temporarily removed commenting from our articles. We hope to have this fixed soon. Thank you for your patience. If you are looking to give feedback on our new site, please send it along to feedback@globeandmail.com. If you want to write a letter to the editor, please forward to letters@globeandmail.com.
Comments