The media's role in helping to present the Olympics to the world is undeniably an important one and often journalists are accused of overstepping the boundaries of decency in the wake of a medal performance.

And so it happens that NBC reporter Christin Cooper finds herself immersed in a world of controversy after she continued to probe U.S. skier Bode Miller on Sunday on his brother's recent death moments after he had won the bronze medal in the men's Super-G.

The moment, which shows an obviously emotional Miller tearing up and then bending over in pain as Cooper continued to pose questions to the athlete about the painful memory, caused an uproar on social media.

It left others questioning just how far a reporter should be allowed to go when it comes to dredging up uncomfortable moments during an athlete's moment of triumph.

Some believe that Cooper "lost sight of the context" during her interview with Miller at the bottom of the ski hill and that NBC, to its detriment, milked the story to its limit.

In Cooper's defence, Miller did open the door during the interview by first referencing the death of his brother, Chelone, who died last year at age 29 of a seizure.

Cooper's doggedness in probing the matter further by continuing to ask three questions in relation to the death even while Miller was obviously becoming more and more disconsolate may have overstepped the bounds of decency.

In a follow-up interview with Matt Lauer on the Today show Miller defended Cooper's line of questioning.

"I've known Chris for a long time. She's a sweetheart of a person," Miller said on Monday. "I know she didn't mean to push. I don't think she realized what my reaction would be. … I don't blame her at all. I feel terrible she is taking the heat for that. I don't think there was any harm intended. There was just a lot of emotion for me."

It must be tough enough when your team at the Winter Olympics only consists of three athletes, a tiny number compared to a country like Canada which sent 221 athletes to compete at Sochi.

It is even tougher when the three-member team from India believes it received the cold shoulder from N. Ramachandran, the new president of the Indian Olympic Association, after the flag-hoisting ceremony.

It would appear that medals are not the only things that some of the Olympic athletes will be bringing home with them from Sochi.

Many of the competitors, primarily from the U.S., have formed relationships with some of the large number of stray puppy dogs that can be found in Sochi and are planning on keeping them when they return home.

The political gamesmanship in Sochi has once again gained notoriety with two members of the punk group Pussy Riot being detained for a time by Russian security forces.

The musicians and activists were accused of theft and were detained for about 10 hours before being released.

Nadezhda Tolokonnikova, one of the band members, wrote on Twitter about a protest song she is preparing entitled: 'Putin will teach you to love the motherland.'

It would appear that not all of the action in Sochi is taking place on the ski hills, ice tracks or skating venues.

The dating app Tinder has experienced a 400 per cent day-over-day increase of new users in Sochi and competitors are scrambling to download it to their various smart devices.

"Tinder in the Olympic village is the next level," said Jamie Anderson of the U.S., a gold medalist in women's slopestyle snowboarding. "It's all athletes. It's hilarious. There are some cuties on there." 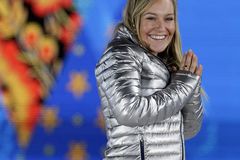 The preoccupation with death and tragedy at the Olympics
February 18, 2014 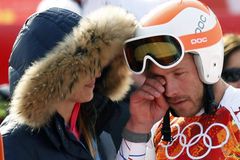 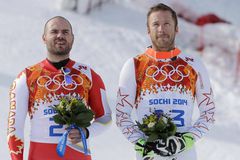