The reports come constantly now. Updates on deceased football players and how their brains were damaged. Findings of chronic traumatic encephalopathy. Suspicions it could be a link to dementia or Parkinson's disease. Unsettling news for those who make their living playing a violent game.

But you will get no excessive fretting from Graeme Bell. He is as practical as he is upbeat, a man who knows both the severity of what his brain has gone through and what he would do if the headaches came and proved more than he could bear. Right then and there, Bell would quit football. He would give up on the one thing that kept him going when everyone else said his playing days were over.

Thankfully, Bell said, he is doing fine. The scar from his fractured skull is hidden beneath his brown hair. He looks, he sounds, he acts with a sense of hopefulness born of appreciation. He considers himself whole again.

"I can't be worried," Bell said when asked about playing for the Saskatchewan Roughriders after having been almost beaten to death by an attacker with a baseball bat four years ago. "Hopefully, that hit to the head doesn't give me Alzheimer's later in life. If all of a sudden I'm having headaches and can't sleep, I'll be the first guy to pull the plug on football. But I don't even think about it right now because I can't.

"I play sports; I love it. I feel good and I'm just so thankful."

If you sift through the Riders' 2011 statistics, you won't see Bell's name mentioned often. He's a 30-year-old backup fullback from Saskatoon who has no carries and no receptions, just a single special teams tackle. But Bell's value goes well beyond touches and touchdowns because his story is about the mysterious workings of the brain and how he was able to will himself back to health and football.

"He got the medical clearance and went through all the concussion tests," Riders general manager Brendan Taman said. "It's really quite the story."

It took only a few moments for Bell's brain to be brutalized. Heading into his second season with the Winnipeg Blue Bombers, he was waiting with friends for a taxi outside a Saskatoon restaurant at 2:20 a.m. local time. It was May 12, 2007. There was a hostile gathering of people near the restaurant. Bell intervened to negotiate peace and was sucker-punched by one assailant then struck in the head with a baseball bat by another.

After being hit a second time, Bell was rushed to Royal University Hospital with a fractured skull and quickly prepped for surgery. His mom, Kathy Bell, a nurse by profession, was in Weyburn, Sask., tending to her mother who was dying of cancer. Kathy rushed home. She didn't know all the details of her son's injury, but she knew it was serious.

"He had a craniotomy to relieve the pressure," Kathy said. "He had an extensive incision. It was huge. When you saw him with all the swelling, it was quite shocking. … We didn't know what the outcome would be."

Doctors drained blood from Bell's brain and inserted 52 staples into his head to close the incision. In the days after surgery, Bell discovered he couldn't talk. Even finding the right words was difficult. The blows to the left side of his head had robbed him of his speech but not his determination. He envisioned a full recovery and playing football again.

"I was told [by doctors]that because of my head trauma I'd never play football again," Bell said. "I wrote on a piece of paper, 'I'll be back.'"

The recovery was slow and the mood sombre. Once home, Bell was like a child again. He had to sleep in the same room as his parents so they could check on him every few hours and ensure he took his medication. He had to relearn how to speak.

At first, he had trouble saying a single word without stuttering. ("It would be, 'He-he-hello,'" he explained.) Then he couldn't say two words together. Depending on when the Blue Bombers called to check on him, they were either discouraged or encouraged by Bell's progress.

"He wasn't the same guy to talk to," said Taman, who was the Blue Bombers GM at the time. "We never thought he'd play again. We hoped he'd be okay to function and have a normal life. But four or five months later, he was getting better. You could hear it in his voice."

Bell took to his recovery the way he took to a football drill. He put in the effort, reading magazines and newspapers to improve his word recognition, constantly talking and asking his family members how he sounded. After five months and multiple magnetic resonance imaging tests and computed tomography scans, the speaking became easier and Bell was cleared to lift weights. In his mind, it was all about getting healthy so he could play football.

"I did go to the follow-up medical appointments and football had never been talked about," Kathy said. "Graeme asked about that in the final session and I was a bit surprised when the doctor said yes. I asked the doctor, 'If you were in his shoes, would you do it?' He said, 'Most likely.' I had to respect that."

"The doctor said it would have to be trial and error," Bell added. "I told him, 'There'll be no error.'"

A year later, in the Blue Bombers' 2008 regular-season opener, Bell lined up for the opening kickoff. He had come to training camp but not played in a preseason game. He flew downfield against the Toronto Argonauts and tackled the ball carrier, Dominique Dorsey. Normally a get-off-the-field-quietly kind of guy, Bell jumped into the air and gave a mighty fist pump. He had returned.

But what happens when the years go by and Bell ages? Will repeated hits to his helmeted head, combined with his medical past, conspire against him? No one can hazard a guess.

"Whether he'll get dementia down the road, who knows?" Riders athletic therapist Ivan Gutfriend said. "If he does, it may not be related to [football or the attack] When Graeme played for Edmonton [in 2010] they did three impact concussion tests on him - one at the start [of the season] in the middle and at the end. He was fine. We did one at the start of this year and we'll keep monitoring it."

Bell's relentlessly optimistic nature extends beyond his health to the men who attacked him. He bears them no ill will. (The man with the bat was sentenced to 23 months in jail and was let out early for good behaviour.) What he has done is counter violence with kindness by speaking at acquired brain injury clinics, working with the Boys and Girls Club, coaching minor football and even participating in the Huddle for Haiti this year.

His message has never changed.

"My story is: Whatever happens to you, you still have a life. You can't be pissed off. You have to go out and work or play sports. If you can't, you can volunteer," he said. "When I was down and out, people I'd never met before were sending me cards and dropping by my house. The community stood by me. Now I want to stand by others." 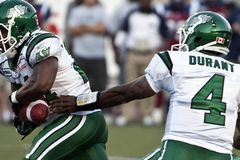 Riders hand Alouettes first loss
July 24, 2011
Follow Allan Maki on Twitter @AllanMaki
Report an error Editorial code of conduct
Due to technical reasons, we have temporarily removed commenting from our articles. We hope to have this fixed soon. Thank you for your patience. If you are looking to give feedback on our new site, please send it along to feedback@globeandmail.com. If you want to write a letter to the editor, please forward to letters@globeandmail.com.
Comments