An independent investigation led by a Canadian law professor has confirmed evidence of widespread doping by Russian athletes and a complex state-sponsored system to protect them. Now Russia's participation in the upcoming Rio Olympics hangs in the balance.

At a Toronto hotel on Monday, Western University law professor Richard McLaren presented findings of his independent probe into alleged manipulation of doping samples by Russian athletes. It presents a damning picture of doping across a number of sports and a complex cover-up that included details like undercover agents dressed as plumbers and urine samples being switched through holes in a laboratory wall.

The World Anti-Doping Agency (WADA) has called for a complete ban of Russian athletes at the upcoming Rio Games. The International Olympic Committee (IOC) says its executive board will convene on Tuesday to decide how it will proceed.

Russian doping scandal: Key takeaways and a primer on the WADA report

The report says that WADA-accredited labs in Moscow and Sochi were cogs being controlled by the Russian Ministry of Sport and were falsifying positive test results to protect doping Russian athletes. They had active assistance from the Russian Federal Security Service (FSB, formerly known as the KGB) and the Centre of Sports Preparation (CSP).

McLaren was commissioned by the World Anti-Doping Agency to lead an unbiased investigation after Grigory Rodchenkov, the former head of Moscow's drug-testing laboratory, told The New York Times that he provided Russian athletes with steroids before the 2014 Sochi Olympics and helped switch tainted samples for clean ones through a concealed hole in the lab wall. Rodchenkov, who is now living in the U.S., said he was operating on instructions from Russia's sports ministry.

Over 57 days, McLaren's commission did interviews, reviewed hundreds of e-mails and secured data from hard drives, retrieved deleted documents, and did forensic analysis. They found evidence on bottles that indicated certain urine samples had been tampered with.

"It was a fail-safe method of permitting cheating Russian athletes to compete while using performance-enhancing substances," said McLaren. "I am supremely confident in our findings."

The report says that the Moscow lab operated a "disappearing positive methodology" in which positive drug tests were being falsely recorded as negative when filed with WADA, by direct order from the Deputy Minister of Sport, Yuri Nagornykh. It adds that lab personnel did not have a choice in whether to be involved in the state-directed system.

The report says e-mails proved that Nagornykh was advised of every positive test arising in the Moscow lab from 2011 onwards via a liaison – and he would direct lab personnel as to which tests were to be falsified. Athletes who were saved via this process tended to be medal winners or athletes with lots of promise; while foreigners or less-promising Russian athletes were not saved.

The Sochi lab, according to the report, was swapping dirty urine samples for clean ones through a concealed hole in the wall of a secure testing area during the night. An FSB employee had access to the lab under the cover of being a plumbing employee.

The investigation found scratches and marks on the insides of some testing bottle caps, indicating they had been opened. They also found evidence in some cases that salt or water had been added to alter the urine. The report says the commission got a specialist in scratches and marks to use microscopic technology to prove that the sample collection bottles used could be opened without creating evidence that could be seen by the naked eye.

The report includes a table that outlines all the sports involved in "disappearing positive" test results by Russian athletes. There were 30 sports listed and they spanned summer and winter Games. The most were found in athletics and weightlifting.

"At times it's exceedingly hard to believe in sport," said Canadian Olympic sprint kayaker Adam van Koeverden. "But at it's at times like this, that it's important we continue to. I'm going paddling."

McLaren chose not to offer recommendations as to how WADA or the International Olympic Committee (IOC) should react to the information found in his report, even though in past independent commissions he's led, he has made recommendations.

McLaren said he had a short window to investigate these allegations due to the impending 2016 Rio Summer Olympics, and that this was just a "slice" of what should be explored.

The report says the system was set up following what Russian sports authorities felt was an abysmal medal count by its athletes at the 2010 Vancouver Winter Olympics and was in place until August of 2015.

The report fuels debate over whether Russian athletes should be banned from competing next month in the Rio Olympics.

WADA called for a complete ban of Russian athletes in Rio and also wants Russian government officials to be denied access to international competitions, including the upcoming Olympics.

The anti-doping watchdog also calls on world governing bodies of sports implicated in the inquiry report to consider action against Russian national bodies.

The IOC, meanwhile, said it "will now carefully study the complex and detailed allegations, in particular with regard to the Russian Ministry of Sport."

"The findings of the report show a shocking and unprecedented attack on the integrity of sport and on the Olympic Games," IOC president Thomas Bach said in a statement. "Therefore, the IOC will not hesitate to take the toughest sanctions available against any individual or organization implicated."

The statement said the IOC executive board would hold a conference call to discuss immediate sanctions surrounding the Rio Olympics.

Russian track have already been banned from competing at the 2016 Games in Rio de Janeiro. Several national anti-doping organizations, including those from Canada and the United States, were awaiting McLaren's findings to see if they would push for a total ban of the Russian team.

In a statement, Russian president Vladimir Putin said officials named in the report would be removed from their positions pending a full investigation, but he called for "more objective fact-based information."

Kelly: Banning Russia from Rio would shake Olympic foundations
May 16, 2018 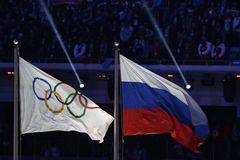