To get to the main stage of the Champions League final this week has required a walk through the sideshow. At least it was entertaining.

First, Ryan Giggs was named - on the floor of Parliament, no less - as an extramarital philanderer, putting to the test Britain's strict privacy and libel laws, and putting to the sword the squeaky clean reputation of Manchester United's veteran midfielder, whose dalliance with a reality television star was suddenly fair game.

Liberated, the British press kicked into full scandal mode, Giggs laid low, and Sir Alex Ferguson fumed, threatening to ban a reporter who asked at a news conference: "How important is Ryan Giggs to your side?"

Meanwhile, in Switzerland, FIFA, the organization that controls the sport globally, including the extraordinarily lucrative World Cup franchise, seemed on the verge of imploding as various folks, including its president, Sepp Blatter, and his main rival, Mohamed Bin Hammam, began publicly accusing each other of corruption. Given that FIFA is at least as dirty as the International Olympic Committee back in its worst days, the effect was of various pots calling various kettles black, with no obvious rooting interest.

Now, finally, it is game on Saturday night at the new Wembley Stadium, United versus Barca, champions of England and Spain, respectively, which on paper, on reputation, on legacy - and, fans hope, in fact - is a dream match for the ages.

"I think many people would agree with that," Ferguson said Friday at the prematch press conference, when asked if this might at least be the final of the decade. "The success both teams have had in football has been enormous. … It's a great final in terms of what could happen in the game tomorrow. There could be a lot of goals, and a lot of excitement."

Or there could be an early Barcelona strike followed by a whole lot of Barcelona possession, shutting the game down and locking it up, as was the case when these same two sides met in the Champions League final in 2009, a match that finished 2-0 and certainly wasn't electric, at least after the first 10 minutes.

It seemed symbolic that Ferguson was accompanied Friday by his two stalwart central defenders, captain Nemanja Vidic and Rio Ferdinand, who will be the last line of defence against the Barcelona attack.

"They stay wide and make runs inside and try to pin your fullbacks down and ask questions of your defenders," Ferdinand said when asked about Barcelona forwards Pedro and David Villa. But in the precise, patient, short passing game that Barca plays - the same style that won Spain the last World Cup and European championship - it starts long before that as the ball is moved forward through two of the best midfielders in the sport, Xavi and Andres Iniesta, and finds its way to the feet of Lionel Messi, who at 23 is making a case to become the third name on the most exclusive list in all sport, next to Maradona and Pele.

There's little argument that Barcelona is the best side in the world, firing on all cylinders, and there are some already proclaiming it the best of all time, though manager Pep Guardiola will have none of that. "To speak about how we are the best team ever, it is impossible, and it is not true," he said.

But they are spectacular, and to get here, they had to fight through another fantastic side, their great rivals, Real Madrid, in the Champions League semi-finals.

Manchester United had a somewhat easier path, and the conventional wisdom has been that this isn't one of the more talented teams of the Ferguson era. But Vidic at the back, and Javier (Chicharito) Hernandez at the front have had great years. ("It has been a remarkable season for that guy," Ferguson said of the 22-year-old Mexican striker. "No one in our club thought for a minute that he could achieve what he has in his first season.") Plus there are those Man U intangibles, a big part of the reason they are appearing in their third Champions League final in the past four years.

"I think the great quality this team has is its unity," Ferguson said. The other adjective he used more than once was "maturity," especially in the case of Wayne Rooney, who bounced back this season from a dispiriting World Cup performance.

To win Saturday they will need all of that, and perhaps a little bit of luck. 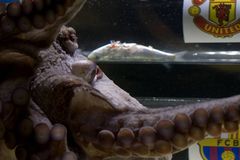 Ferguson aiming for final flourish
May 3, 2018 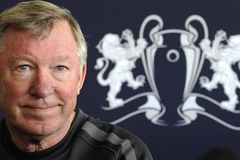 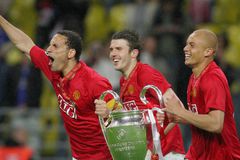 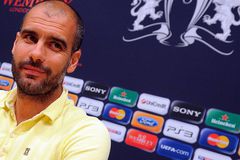 Ferguson to stick with trusted formula for Barcelona
April 30, 2018