While its schedule after this week is unclear, Toronto FC knows what it needs to do Wednesday in Montreal.

Toronto looks to bounce back from consecutive losses when it plays the last match of its six-game Canadian round-robin against the Impact on Wednesday. TFC’s MLS schedule is bare after that – with the possibility that Canadian teams may have to head to temporary bubbles south of the border because of pandemic-related travel restrictions limiting the ability of U.S. clubs to come north.

There is plenty at stake Wednesday. A win and Montreal will be in the driver’s seat in the mini-tournament – created to give Canadian teams regular-season games while the border remains closed – to decide which MLS team advances to the final of the Canadian Championship.

“The last game and our last opportunity to impact this tournament,” Toronto coach Greg Vanney said. “For us, it’s a final.”

Toronto goes into the match with nine points in the tournament standings, three ahead of Montreal, which still has a pair of games remaining against the Vancouver Whitecaps (who have three points from four games).

The team with the best record after the all-Canadian portion of the schedule advances to the Canadian Championship final against the winner of the CPL’s Island Games with the Voyageurs Trophy and a berth in the CONCACAF Champions League on the line.

After Wednesday, Toronto will have to watch from the sidelines as Montreal plays at Vancouver on Sept. 13 and 16.

“We’ve got to try to close this out and make it as difficult as possible for Montreal,” Vanney said. "Obviously the two of them on some level will take points from each other, but we’ve got to make the gap that they have to close as big as we possibly can.

“Taking points, specifically three points, from Montreal is important. And then those two have to duke it out to see where they are at the end of the day.”

If Toronto wins, the Impact will have to defeat the Whitecaps twice to match TFC on points. Goal difference would then be the first tiebreaker with Toronto currently holding a one-goal edge over Montreal in that department.

“It’s a tough team to beat,” he said. “No matter what circumstances.”

The Impact ended Toronto’s 18-match unbeaten streak in regular-season play, one short of the league record, with a 1-0 victory at BMO Field last week.

As for his club’s road map after the Canadian games, Henry offered little.

“All I can say, is that we’re preparing for the game against Toronto and we have two games in Vancouver. Then, we’ll adapt.”

“We’re letting them off the hook a little bit too much,” Vanney said.

Added Osorio: “We’re getting the chances. ... We just have to execute, have a little bit more of that killer mentality in front of the net.”

Toronto will also look to tighten up its defence, after conceding goals from set pieces against both Montreal and Vancouver.

The two losses knocked TFC out of first place in the Eastern Conference – and the league. It stands third in the East behind conference-leading Columbus and Philadelphia (on goal difference). Montreal is sixth.

Toronto did not start striker Jozy Altidore and defender Chris Mavinga last time out on the artificial turf in Vancouver. Both have been managing injuries – foot for Altidore and ankle for Mavinga – but Vanney said they should be available Wednesday.

Toronto will be without captain Michael Bradley (knee) and forward Patrick Mullins (hamstring). Fullback Richie Laryea (ankle) is back training and could be available Wednesday. 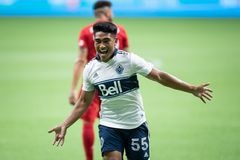 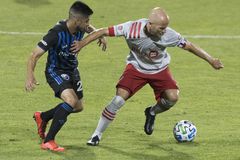 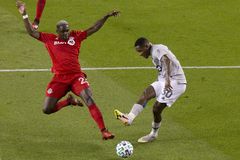