Teenager Alphonso Davies scored a goal and had a team-record three assists to help the Vancouver Whitecaps beat Orlando City 5-2 on Saturday night.

The 17-year-old Davis snapped a 1-1 tie in the 76th minute. Midfielder Jordon Mutch took a shot that goalkeeper Joe Bendik stopped with a diving save. Davies scored on the rebound.

Striker Kei Kamara scored twice for Vancouver (6-5-5), once on a penalty kick in the 85th minute, to break out of a scoring drought. Yordy Reyna and Nicolas Mezquida also connected.

Davies made a pretty run to set up Kamara’s goal in the 36th minute. He stole the ball near midfield, made several nifty moves to get past three Orlando players, then passed to Kamara. Davies also made pretty passes to set up goals by Reyna in the 87th and Mezquida in the 90th.

Ibrahimovic put away a header in the 61st minute to open the scoring. Goalkeeper Nick Rimando’s punch of a cross by Chris Pontius deflected directly to Ibrahimovic for the point-plank finish into an empty net.

Ibrahimovic outdueled Justen Glad at the top of the 6-yard box and side-netter a header off an entry by Servando Carrasco from 35 yards out to give the Galaxy (5-7-2) a 2-0 lead in the 67th.

Montreal’s Matteo Mancuso put Dallas up 1-0 with an own goal in the fifth minute. The ball ricocheted off his head when a teammate attempted to clear Diaz’s indirect free kick with his own header.

Dallas was initially ruled offside on the play, but after video review, the goal stood when Montreal was determined to have made first contact. Diaz scored for Dallas (14-7-1) in the 18th minute on a penalty kick after Maxi Urruti drew a penalty on Rudy Camacho in the box.

Montreal (4-11-0) nearly avoided the shutout when Mancosu banged a shot off the post from the right side of the box at the 50th minute just before halftime.

Nicolas Lodeiro ended a 362-minute Seattle scoreless drought in the 57th minute, and Magnus Wolff Eikrem headed in the winner in the 83rd as the Sounders rallied to beat D.C. United.

Seattle (3-7-2) had not scored since Handwalla Bwana’s tally in the 54th minute of a 2-1 win at Toronto on May 9. Since then, the Sounders were blanked by Portland and twice by Real Salt Lake.

The 362 minutes tied a club record for longest dry spell between goals, originally set over the course of six games from July 11-Aug. 9, 2015.

Lodeiro’s shot from the top of the penalty-area restraining arc tied the game just four minutes after Darren Mattocks had put D.C. (2-6-3) in front. It was the first goal of the season for Lodeiro, who rejoined the team this week after not making Uruguay’s 23-man World Cup squad.

Diomande, who signed with LAFC on May 2 and made his first start against San Jose, has three goals in three MLS appearances.

Moutinho, a 20-year-old rookie defender, kicked in his first MLS goal from just inside the penalty area to give LAFC (7-4-3) a 4-3 lead in the seventh minute of injury time.

New England (6-4-4) is unbeaten in its last four games and has just one loss in its last six.

Alexander Callens tied it for New York City in the 77th minute.

Callens scored on a header to finish David Villa’s header flick of Maximiliano Moralez’s corner for NYCFC (8-3-4). Josef Martinez opened the scoring for Atlanta (9-3-3) in the 48th minute with his league-leading 13th goal of the season.

Alex Muyl pulled New York even against Columbus a header in the 57th minute.

Goalkeepers Jeff Attinella of Portland and Tim Melia of Sporting KC each made four saves, and the teams played to a scoreless tie.

Sporting KC (8-2-5) and Portland (6-3-4) entered the match not having lost since April. The Timbers are unbeaten in their last seven games and Kansas City now has gone six games without defeat. 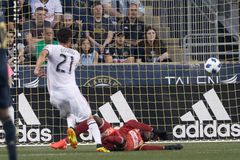 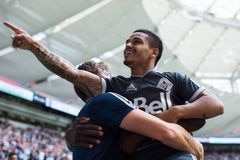 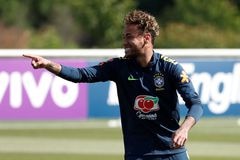